The Nose Is the Face’s Toilet

Listen to me, people! 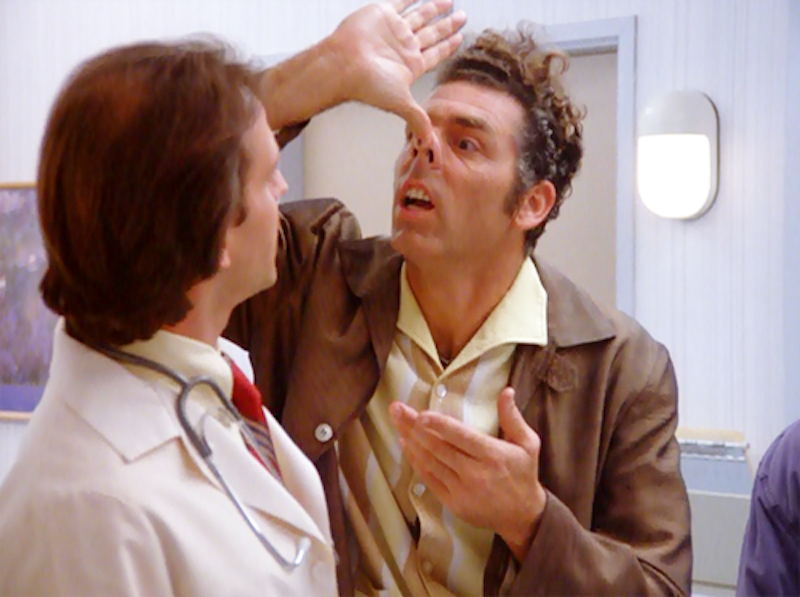 Seinfeld never did a nose hair episode. This thought keeps me comfortable. There are guardrails in place, and the culture won’t swerve as far as that. People won’t start talking up nose hair as a topic for fun stuff, the way they do prison rape or Donald Trump. Or they haven’t so far. I find my surrounding world grubbier than I am. That’s a hoot, considering I’m poorly-groomed and wobbly on my feet. But the difference is there and it can be shocking. For example, people blow their noses when they’re around other people. I wouldn’t remove waste from a bodily crevice, not when somebody had to watch, and especially not if wet sounds were heard. People blow their noses. They’re willing to do that, and I have to guess what they’ll do next.

But Larry David hasn’t done a nose hair episode. Not on Seinfeld and not on Curb Your Enthusiasm. That’s a 20-year spread where he was digging for squirmy little topics; his hand never touched this one. A powerful reverse mojo hangs on this topic, and that keeps me safe. For now.

Viewed properly, the nose is the face’s toilet. Things are flushed out here. They’re not wanted inside, so they go outside, and they’re wet, warm, and sometimes bulky. A process like this shouldn’t happen across the table from somebody. Of course, a little toilet shouldn’t be sitting over your lip and pointing across that same table. People tell themselves a story, that the toilet isn’t a toilet no matter what comes out of it. If so, I find this a clumsy choice. Pinning the story in place means pushing down a piece of reality, namely that bodily waste is being excreted in front of you.

Eventually, I suppose, people will stop blanking out this fact. Heavens knows what sort of mind-body reshuffle is taking place as we stagger through these schizzy decades. When we’ve got our new picture of reality, the functions of the facial sewage plant may finally be in focus. Except by then, I’m guessing, people will have decided that sewage functions aren’t a problem. We’ll notice the nose blowing; we won’t notice that it’s disgusting. If I’m alive, I’ll just have to live with this. The hospital staff will have plumbers’ cracks, and so will the visitors—everybody. And the nose hair episode of Seinfeld Zombies (starring Dhani Harrison as a CGI-enhanced reboot of the first Seinfeld) will play on a monitor that’s out of my reach. Kramer (Michael McKean’s grandson, also CGI-ed) will have a tuft that winds up in George’s soup. Or maybe it didn’t—the gang will have to guess.

George will be Jason Alexander himself: still alive, planted like a potato in a bank of bio-mechanical prosthetics that simulates his body from 1993. He’ll crook an elbow, and $30 billion of technology will enable his finger to poke into his nose. There’s a wet sound. “This is it,” Jason says, just to me. “This is what we’re alive for.” I close my eyes, but I hear what happens next.