Taking solace in the glory of bees. 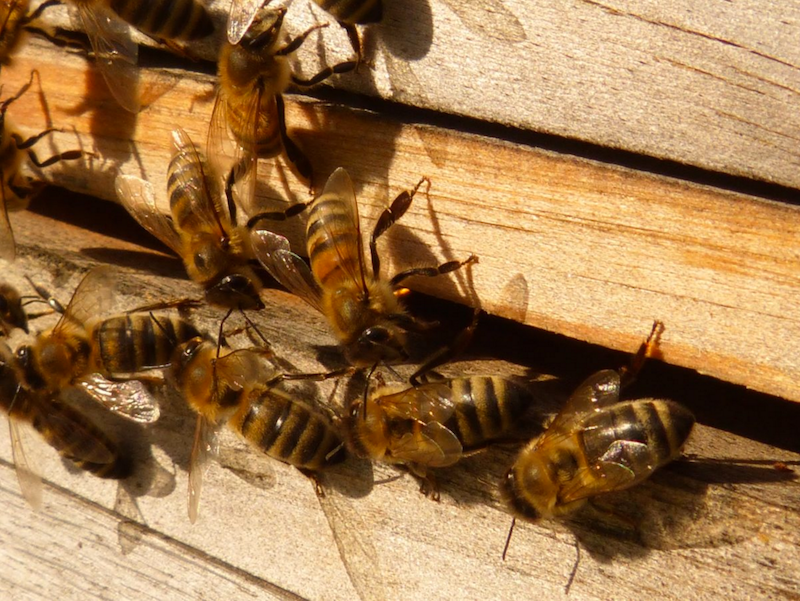 Facing what looks more like a serious health issue, I take solace in my bees.

I walk out at morning, my new sense of mortality making the sight of the dewy Indiana meadows only more sweet. Look how the grass glistens in the sun! Look how the willows, freshened by rain, shine with a rich new shade of green! O, it is a vision of heaven!

The popinjays dive against the pale blue of the sky. The cool air is fragrant with honeysuckle, pig-dung, and the perfume of our basswood grove.

So overpowering is the glory of nature at these moments that I am thankful once again for the pagan elements that are everywhere in glorious Russian Orthodoxy. These are elements that sanction, rather than proscribe, a delight in the good things the soil provides.

Donning my beekeeper’s helmet and other livery, I approach the hives. A puff from my smoker drives the drones away, exposing the rack on which the new honey drips in its succulence. (And shall we not sup on milk and honeycomb in the Kingdom of Heaven?) Near the hive aperture, one brave little bee, weaker than the others, fights for room among the others. His struggle is a metaphor for the beastly struggle life of Man unredeemed, Man unwilling to accept the freely given grace of God—is it not?

But see—I had too little faith in God’s providence. The stronger bees move aside to accommodate this little bee. He finds his place, just as the weakest among us, the halt and the lame, find their place in God’s order. O go forth little fellow of the apiary! Be humble, but of good cheer, and prosper, for the Lord lovest thou!

Like St. Mitrophan of Voronezh in his trials, I will have need of the spiritual balm that communion with the green world offers.

A happy belated Fourth of July to all.

Not that la famille Harris, or our greater religious community here in Indiana, puts much stock in that holiday. Whatever its original meaning, Independence Day long ago became a vulgar celebration of the imperialist state’s, and a fetid post-Christian culture’s, filthiest impulses.

Mainstream politicians fall over themselves to associate the holiday with the United States’ most brutal overseas adventures, extolling “troops” who are “bravely” “defending our freedom” in various obscure locations overseas. In truth, these U.S. troops are murderous Zionist stormtroopers hopped up on amphetamines and sanctioned by our government and its various propaganda organs, from The New York Times on down, to kill everyone who might be understood as a barrier to the Davos Agenda, regardless of age, moral culpability, or gender.

Closer to the ground, a polyglot populace stupefies itself with beer, opiates, fireworks displays, kitsch music, and grilled beef and sausage products. All this gluttony and “merriment,” just to cover up the emptiness at the core of American life in an age when Christianity is in retreat, and the values of late capitalism and “liquid modernity” have been elevated to law, never to be questioned by the herd.

Truly we wander in a darkling wood.

Meanwhile, as Americans wallow diabetically in this jingoistic bacchanal, the leaders to whom they give their sheep-like assent continue their global marauding—their sociopathic project to prove that, as the wonderful left-wing blogger Freddie DeBoer has pointed out, the United States is the most destructive actor on the world stage since the fall of Nazi Germany. A tweet from another left-wing blogger, Michael Tracey, alerted his readers this weekend to an article by Peter Hitchens that shed light on some of the recent mischief the American Wehrmacht has been up to. I recommend it.