Hunting for Gems in Hunt’s Point 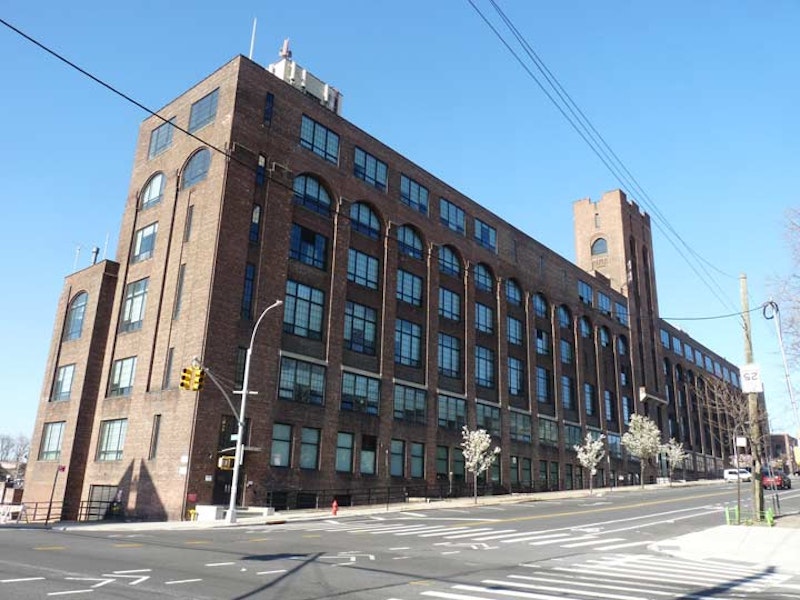 Hunt’s Point, not to be confused with Queens’ Hunters Point, is easily definable as it’s cut off from the rest of the Bronx by pedal-to-the metal Bruckner Expressway, the East River, and the Bronx River, which divides it from Soundview and Harding Park. It was settled as early as the 1690s by the Leggett and Hunt colonial families, and for many years was a rural enclave dotted with opulent mansions owned by Edward Faile, Paul Spofford, Cuban patriot Innocencio Casanova and Benjamin Whitlock. The only trace of them now, and other colonial-era names, is words on street signs.

In the early-20th Century, high-speed railroad lines, as well as elevated and subway lines, spelled the conclusion of Hunt’s Point’s rural era of exclusivity. Single-family homes and apartment buildings arose along streets in the northern half of the neighborhood, with industry and railyards along the East River to the south. Two of the largest produce markets in the world, the New York City Produce and Meat Markets, opened in 1967 and 1974 respectively. The old Fulton Fish Market joined them in 2007. They’re now surrounded by the Hunt’s Point Industrial Park, hosting over 800 businesses and a large Con Ed plant at the southeast end of the neighborhood at East Bay Ave.

Like the rest of the Bronx, Hunt’s Point suffered a severe decline in the 1970s and 1980s as poverty, crime, arson and a crack cocaine epidemic caused severe privations. The area lost close to two-thirds of its population by 1985. Hunt’s Point continues to struggle out of this malaise as best it can.

The fortress-like building seen above at Lafayette Ave. and Tiffany St. has produced Mexican, Brazilian, Costa Rican, Ecuadorian and Haitian stock certificates, travelers’ checks and paper money. The company later to become American Bank Note was founded in the 1790s by engraver Joseph Perkins, a Massachusetts native from Newburyport; the company was incorporated in 1858. American Bank Note did produce US currency from 1858 to 1879, and for a short time in 1861 produced Confederate money. The company also entered into printing stock and bond certificates in association with the New York Stock Exchange in the later-19th Century. Its Bronx factory was built in 1911 and it was designated as a NYC Landmark in 2008.

Later, the American Bank Note Building was home to artists’ studios and Wildcat High School, established for troubled students by the Wildcat Service Organization. Developed in 1972 by Mayor John Lindsay as a “program of last resort” for the chronically unemployed, the organization provided job skills and training for the economically disadvantaged. By 2012, however, it had gone the luxury condo route, as The Banknote.

For many years the ABNC employed an engraver named Joseph Ford, who was a legal counterfeiter! He duplicated various currencies produced here; his successes in counterfeiting banknotes prompted changes in their manufacture. His son, William, became the world’s most successful portrait engraver (the type that appear in The Wall Street Journal). 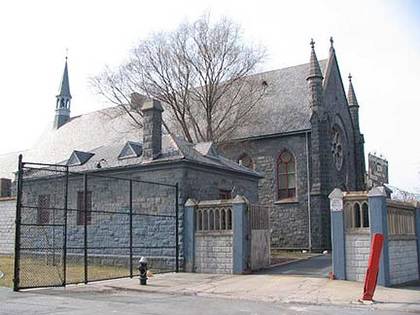 Directly across Lafayette Ave. from the Bank Note building is Corpus Christi Monastery, home to a flock of cloistered Dominican nuns. It’s thickly walled on its Tiffany and Manida Sts. and Spofford Ave. sides; it was designed in 1890 by architect William Schickel. 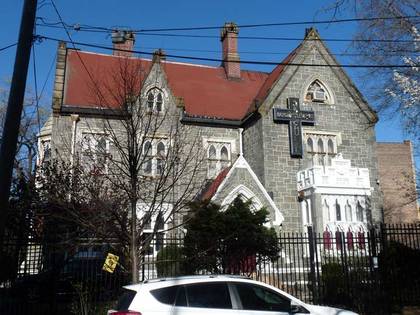 Most of the grand Hunts Point estates disappeared in the early 20th Century. Peter Hoe’s magnificent Sunnyslope on Faile St., a Gothic Revival extravaganza built in 1860, is still standing. The Hoe family business was printing; Peter’s brother, Colonel Richard Hoe, invented the rotary printing press. The Hoe family was revered enough that in 1897, a series of streets in Longwood cut through Richard Hoe’s estate, Brightside, was named for them: Hoe Ave., Aldus St. and Guttenberg St. The most famous name, Guttenberg, was renamed E. 165th; Aldus St. is named for 16th Century Venetian printer Aldus Manutius. Aldus, an early name in computer printing software, sold its Pagemaker program to Adobe, Inc. in the 1990s.

Sunnyslope was originally built on land belonging to William Gilbert. Its asymmetrical graystone construction is said to be derivative of some of the houses and cottages Calvert Vaux, co-architect of Central and Prospect Park, was producing at the time it was built. It became a synagogue in 1919 and most recently has been the home of African Methodist Episcopal Bright Temple. 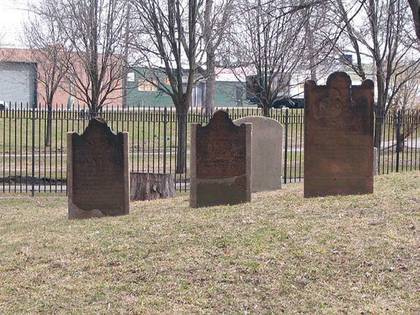 Located in a part of the Bronx mostly given over to industrial works, auto parts emporiums, hookers, and one of the world's leading food markets and the new home of the Fulton Fish Market, Drake Cemetery, also known as Drake Park is one of the Bronx's smallest cemeteries.

Joseph Rodman Drake was a poet whose work was mostly forgotten by the early 2000s, but he made a name for himself in his own era, the early 1800s. He was born in lower Manhattan, but discovered the then-bucolic fields of Hunts Point as a young man; in fact he would often brave the currents and rowboat across the East River from his home north to Hunts Point. He’d write his poetry during these Thoreau-like Hunts Point visits. Drake's most famous poem was "The Culprit Fay.”

Drake died of tuberculosis at age 25. Before his death he requested to be laid to rest near the Bronx River, and so a burying ground was created at what is now Hunts Point and Oak Point Aves. Since then, members of the prominent families of the era, the Hunts, Leggetts, et al., have been buried here. At one time, all of Hunts Point was owned by the Leggetts; as one Leggett family member wrote in a letter in 1892, “One might roam all day through the woods and fields without going off the property. The nearest village was three miles away.”

While the cemetery is officially administered by the NYC Parks Department, it’s not the only such association in NYC. Queens’ Calvary Cemetery also contains a Civil War monument that’s officially a NYC park. 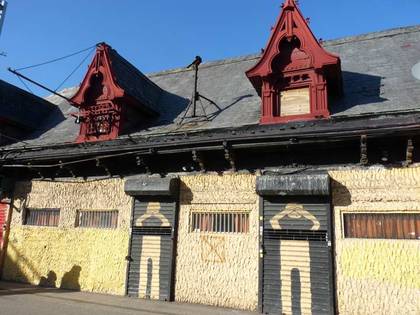 The Bronx is the only mainland borough in New York City, and in the golden age of railroads of the pre-World War II era, it had plenty of freight and passenger routes that served upstate New York and New England. According to subway and railroad historian Joseph Brennan, the New York, New Haven and Hartford railroad made its entry to New York via the Harlem Line (still a main branch of the Metro-North) in 1849, but the secondary route known as the Harlem River Branch was opened in 1868 mainly to make freight connections by water with other railroads. Local passenger service was also run until 1931. The line was rebuilt in 1908-1910 to six tracks with complete grade separation, and all new stations. It was also electrified. Most of the branch became part of the Hell Gate Route, opened in 1917, the main line from Penn Station to Boston, and so it still has intercity trains today run by Amtrak.

The southernmost extant station of the NY, NH & H is the Hunts Point station is on Hunts Point Ave. near the Bruckner Expressway. Most of the station is intact, including many of its peculiar architectural traits though the roof crenellation (decorative ironwork) is long gone.

The Hunts Point station today was recently home to a variety of businesses: a deli, pizza place, travel agency, and an establishment that boasted, last time I was there, a hand-lettered sign advertising for "exotic dancers." Its Dutch-style trefoiled dormers, which formerly featured windows, these days are home to roosting pigeons. Like the other Gilbert railroad stations along the NY, NH & H that I have seen, it features a terra cotta diamond motif, but at Hunts Point the diamonds are flanked by stylized fish.

Every so often Gov. Cuomo talks about reactivating local service and restoring the stations on this line, but so far, it’s been just talk.