I Remember Working with Fellini

Bennington reminisces about the shooting of 1973’s Amarcord, where he doubled as a peacock. 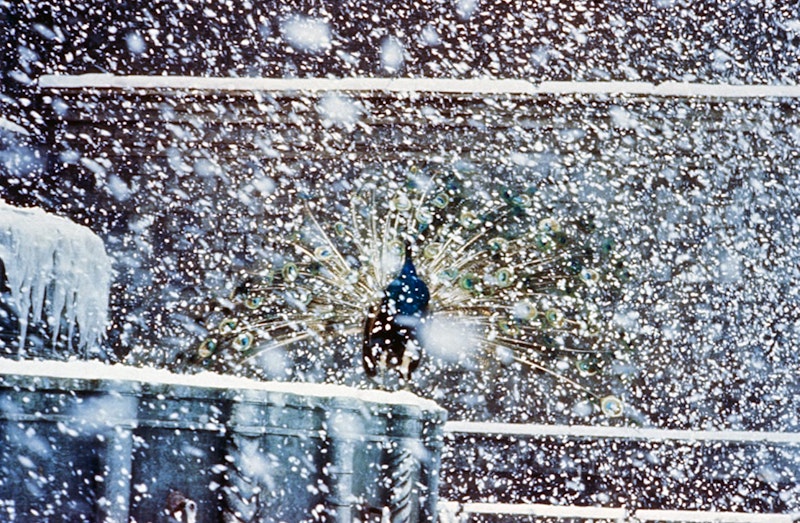 I thought you could do anything in Wannado City. Wannado this? Wannado that? Apparently not. Jobs unavailable in Wannado City: vice cop, pornographer, drug runner, jaywalker, public defender, experimental architect, and, the one I was most excited, about, movie theater projectionist. Since this place hasn’t been used in over a decade, there’s gotta be a 35mm projector in whatever theater they have… somewhere… I don’t think you guys understand how big this place is. Rooster and Monica didn’t really talk about it but Wannado City is roughly six times the size of the mall that it now borders (and is brick walled against). We haven’t found any creatures (although Monica was accosted by a simple pervert in the old Burger King and promptly spur-clawed him to death, as is proper). No human beings either, at least live ones; I think we may have stumbled upon a mass grave the other day, I’m not sure, Rooster will have more about that next week.

What I can tell you are the sounds in here are horrifying. You’ve never heard such demented ranting, and in Florida! I ain’t ‘fraid of no ghosts, but after a while they can get pretty fucking annoying. JUST TELL ME WHO YOU WRONGED SO I CAN EXACT YOUR REVENGE! Or: THEY LOVE YOU, EVERYTHING’S FINE! GO AWAY! If you’re a bird like me, part of the natural kingdom, you know that ghosts are real and that the fear human beings exhibit towards them lately is extremely funny. Besides being able to tell when a tornado or an earthquake is going to hit, we can see and hear ghosts—all the time. It’s not uncommon at all; in fact, it’d be unusual to spend a day in any major city or small town and not see at least a dozen ghosts ambling about, all in various states of plaintive inertia. Some are lost, some are sad, and some are really fucking angry—in other words, they’re just like you and me and everyone else on the subway.

When I finally found the movie theater in Wannado City, I figured it’d be full of ghosts, but I didn’t expect a full house. They’re running House Party and Car Wash and Little Darlings on a constant loop! I asked head ghost Bert what else he had in the catalogue: Foxes, Every Which Way But Loose, Tootsie, Atlantic City, Dressed to Kill, Breaking Away, Porky’s, The Fog, Friday the 13th Part II… these were 1980s kids. Or teenagers, whatever. Everyone in there was acting too young to be ghostly, but they were dead. What happened? Bert filled me in: “Wannado City was actually built on top of another mall that was bulldozed around 1987, maybe ’88 or ’89… around ’84, there was a huge fire in the food court, and a lot of people hid out in the theater. They all suffocated. The flames never reached the theater itself, but it was the only business that survived. No one was sad to see it close. Now we have prints to screen forever for forever kids.”

I asked if he had any foreign films—this was a period of time in popular American moviegoing where a name like Lina Wertmüller was as recognizable as Robert Altman. “Ah! Yes. Not many. Only two, actually: The Marriage of Maria Braun and Amarcord.” Preferring pizza to sausage, I asked for a screening of Fellini’s 1973 masterpiece, his last major film before his death in 1993. He outlived all of these ghosts, but judging by their reaction, they’d seen Amarcord many times before. Alvaro Vitali got three standing ovations. Everyone was silent when the fascists shot the phonograph playing the “Internationale.” And there were muffled sobs when the “miracle in the square” occurred: a peacock, “the count’s peacock,” lands and spreads its wings to all of the town boys. They’re transfixed, and then Fellini cuts to a close-up, and then FADES OUT ALMOST IMMEDIATELY?!?!?!??!

If you were bothered by this, I’m sorry. It was my fault. I was the peacock’s stand-in and I was late. Like all Italian filmmakers, Fellini kept a loose set, where no sound was recorded and lunch last three hours instead of 30 minutes. I was late from a lovely visit with a regazzina, and a little too much vino, and definitely too much pasta. I vomited on the maestro’s shoes. If it were Visconti or Ford, I’m sure I would’ve been executed on the spot. But Fellini was charmed, and allowed me to remain on as a background actor even if I couldn’t fulfill my duties as a peacock stand-in. Nice man. Fat, but nice.

I was remembering Italy, the 1970s, and all that’s happened in the 50 years since, and in my reverie, the fucking ghost projectionist left me with rewind duty. Ghosts are just as petty and rude and living things. Even in Wannado City, I’m still an unwanted outsider! What the fuck, seriously! I feel good about our discovery, though. There’s clearly a market here. I think I’m going to trick the ghost owner and make this my own theater… no one has to know but me… not even my relatives.