The Media Is You

The Influencing Machine takes a look at the news business and the perennial pitfalls of information gathering. 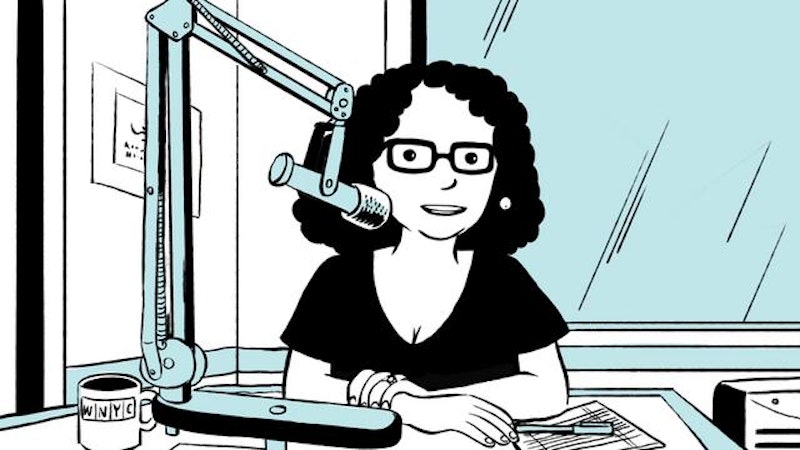 The Influencing Machine is a peppy book about the news media. The author, Brooke Gladstone, always wanted to write a comic book, and she does the program On the Media for National Public Radio. Bring those facts together and you get Machine, though only after a good deal of work and some uncertainty. (Gladstone hails her editor for his prowess with “difficult projects that have no real comparables in the book biz.”) Machine is a hardcover but features pictures and word balloons instead of text. The back cover calls it a “work of graphic nonfiction,” which shows that common sense has caught up with the term “graphic novel.” Gladstone wrote the script, and her co-creator, the comic artist Josh Neufeld, drew the pictures. They’ve come up with a tidy, fast-moving, but somewhat myopic look at how information is reported and what the mind does with it on delivery.

Gladstone has dug up provocative facts: Samuel Adams faked atrocity stories; somebody probably made up the story of Hearst writing a telegram saying “You supply the pictures, I’ll supply the war” before the Spanish-American War; the same number, 50,000, keeps showing up in media scare stories as the figure for online predators, abducted children, annual transfat deaths, and satanic cult sacrifice victims. (It was reported as such at a time when the United States had 20,000 homicides a year.) You’ll notice how “story” keeps coming around. Machine’s thread is the way our collective information gathering tends to go wrong, with the reasons under examination sometimes being institutional but more often merely human.

Following this route, the book proceeds from issues like censorship and media bias and overreliance on official sources to a look at psychological findings that show how little gets into our heads unwarped even when the media doesn’t play a role. A big missing topic is media ownership, a subject that seemed inescapable until Gladstone slipped by it with a one-sentence mention. The book’s one-two finish is some speculation about how thoroughly wired up humans will find themselves in a few decades, then a “What can I do?” section. “How can we ensure that our development as moral and social animals keeps pace with our rapidly evolving communications technology?” the cartoon Gladstone asks. Her answer: “By playing an active role in our media consumption.” We have to read reporters we trust, and sometimes read original documents. What else is new?

For the book’s up-and-out, the absolute finish before the credits, the cartoon Gladstone gets lofty and speaks to us like Rod Serling with an updated vocabulary. “Our enemies are not the digital bits that dance across our screens,” she says, “but the impulses that animate our lizard brain.” This sounds like a false opposition. We can have plenty of enemies, inside and outside. A smart liberal view of the media that centers on humankind’s common intellectual frailties may show certain limits, and they’re on display in The Influencing Machine.

Early on, the book tells us the story of James Tilly Matthews, a poor nutter in late 18th-century London who believed a giant machine controlled the brains and behavior of members of Parliament. It makes for a neat episode, and the book dwells on it, but the story doesn’t reveal much about the book’s subject. True enough, Matthews and others have got themselves stuck on the idea that machines can control our minds. No, that doesn’t mean it’s crazy to think the media can change the way its users think, feel, and live. A handy quote from George Orwell: “A man may take to drink because he feels himself to be a failure, but then fail all the more completely because he drinks.” Our habits come from us, but a given habit will amplify some parts of our natures and muffle others, and the results can be powerful.

True, the media reflects who we are, because people make it and these people keep in mind the ones who consume it. (“The media do not control you,” Gladstone writes. “They pander to you.”) But that doesn’t mean the media is a mirror and nothing more, or even a collection of mirrors, as Gladstone tells us. Oddly, it’s exactly what her title calls it: not a machine that controls, but one that influences. Inside the book it gets demoted, and Gladstone never notices the difference. Tidy and intelligent as the book it is, it could have used tougher and deeper thought, including its title.