We Need a Good Book About Funny-Looking Drawings

The Metropolitan Museum gathers some gems but doesn’t know what to say about them. 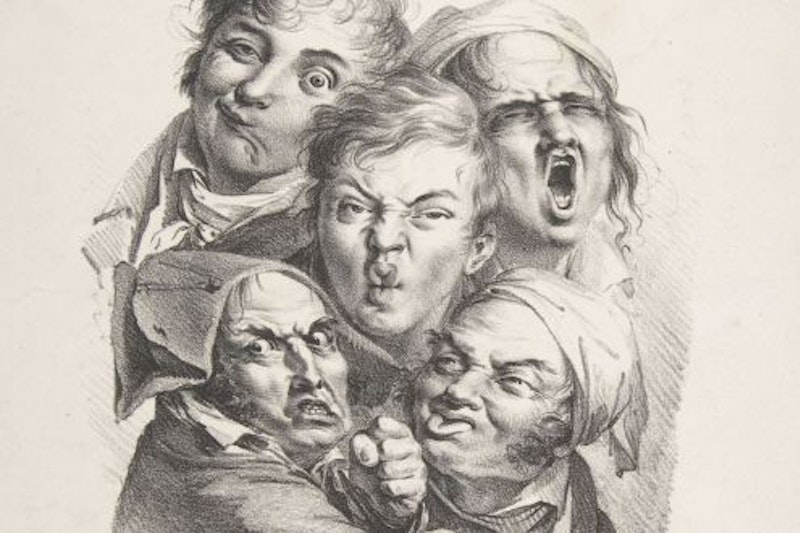 It turns out there is no history of caricatures, at least not one that’s worth a damn. You might assume there was, and that possibly it might be Infinite Jest: Caricature and Satire from Leonardo to Levine. The book, a very nice production for coffee tables, is derived from the exhibit of the same name, one mounted by the Metropolitan Museum of Art and due to remain there until March. The book version contains 160 ably reproduced sketches, drawings, engravings, etchings, and lithographs that make people look funny. Many of these range from fresh to dazzling, and the rest at least have value as social documents. But the text, including the various pictures’ lengthy captions, is close to brainless.

The book has enough information about history that we can say Leonardo da Vinci drew the first caricatures, that Bernini most likely drew the first of actual people, and that by the 18th century the form was generally recognized and its specimens were sold in Paris and London print shops. The authors—Constance McPhee and Nadine Orenstein, two curators at the Met—have thought about their museum’s thousands of caricatures long enough to decide that funny-looking drawings involve exaggeration, “extreme physiques” (which sounds like a subcategory of exaggeration), the depiction of people as animals or objects, and the depiction of people en masse. The extreme physiques tend to fall into pairings of fat and thin, short and tall, and the themes tackled by the drawings most often involve politics, customs and fashion, or the famous. The preface also notes, “What humans find innately funny has changed little over time.”

All of this is something but not much. The book can’t even say what a caricature is. The most common definition would probably be that caricature makes an actual person look funny. Infinite Jest certainly doesn’t buy the “real person” requirement, and in fact some of the pictures here aren’t centered on individuals real or imaginary. Past that it’s hard to pin down what the book views as caricature. Classiness counts: “The caricatures and satires discussed here were usually conceived with greater seriousness of purpose, and took longer to produce, than modern cartoons.” But many of the works don’t show much seriousness at all, which is not a surprise in a book of funny drawings. The book’s other ground rule has about the same staying power. A caricature is not a cartoon, the preface says, and a cartoon is “a humorous image published in a magazine or newspaper, produced quickly, and generally not preserved.” But some of the best works reproduced by Infinite Jest were done for print publications. The definition would appear to come down to questions like how long David Levine could take with his drawings for The New York Review of Books. If very much longer than Pat Oliphant can take for his newspaper cartoons, then David Levine was a caricaturist.

Possibly that’s why Oliphant isn’t here, in which case it’s too bad about the rule. The collection could also have used works by Max Beerbohm and the caricaturists who parodied Victorian notables for Punch, more by Thomas Nast, and fewer by Thomas Rowlandson. It has just about the right number by James Gillray. France is heavily represented, often to great effect, but there’s little or nothing from Latin America or most of Europe, and nothing at all from Africa, Asia, or Australia.

What makes it all worthwhile is that one after another of the finds is a stunner. To describe them you have to describe virtuosity and daring, some of it by grand names of the canon (da Vinci, of course, and also Delacroix, Daumier, Goya, Doré, Tiepolo, and Hogarth, among others), some of it by forgotten craftsmen (the man behind the cloud of faces on a novelty fan of the Napoleonic era) and obscure eccentrics (Joseph-François Foulquier, for example, who drew the odd gallery being regarded by a boar-headed 18th-century gentleman in a work whose title translates as “All Who See Me Jeer at Me”). The range of the works is a surprise. They go from the gleaming and absurd detail of engravings based on Bruegel the Elder—fantasy landscapes so manically realized in such splendid ways that they make having an imagination start to seem kind of silly—to the droopy, wavy-lined London types drawn by Philippe-Jacques de Loutherbourg, to Nadar’s thronging line-up of a hundred or so Parisian men of letters drawn with vividly individual personalities and arranged in a modulated boa of miniature torsos and faces.

The works in this book demonstrate that, on many occasions, the human mind has been up near its best when some character was drawing a pen across paper in order to offend verisimilitude, proportion, and (often enough) decency. It doesn’t just happen with symphonies and landscape paintings. Next, finally, somebody may set to work on an account of when, why, and how these moments occurred and then developed into a form. Infinite Jest shows the job is worthwhile, but it doesn’t qualify as a start.