Actually, Seattle’s Not Such a Bad City

Too bad flying anywhere is such an ordeal. 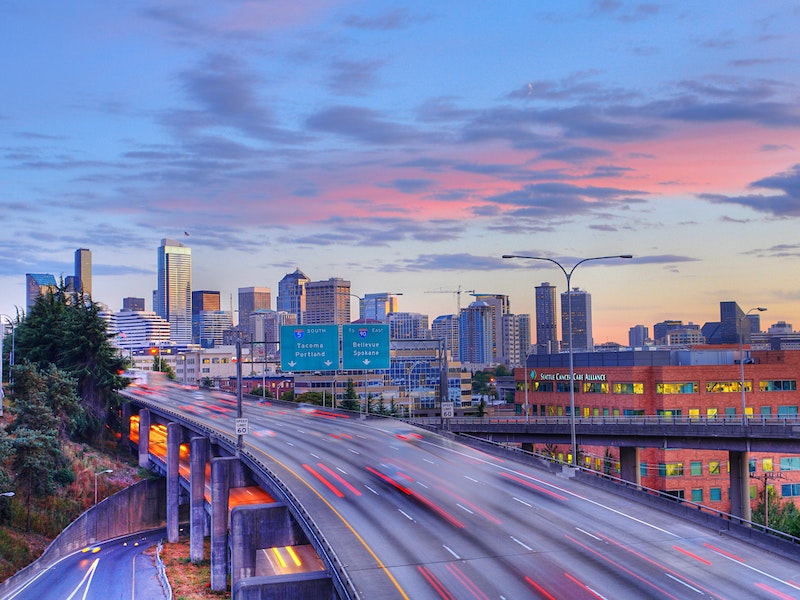 It was last leg of a 40-hour, Baltimore/Seattle/Baltimore business trip, and I was dog-tired when boarding a United flight from Chicago’s O’Hare, settling into 37C, the last row of seats on the plane. That suited me fine, since unlike the previous three jaunts, this plane wasn’t fully booked and I had some room to stretch, relatively speaking, in this age of vastly diminished air travel. The guy across the aisle, maybe 30, was chipper and we engaged in cursory small talk: he was astonished when I recalled that our part of the cabin was where, in the preceding century, smokers were relegated. Apparently he’d never flown when it wasn’t a crime to light a cigarette during the journey, and we both agreed it was oddly anachronistic that aircrafts still have the “no smoking” light next to the “fasten seat belts” reminder.

As is more common today, the stewardess lurking behind us was a nasty piece of work, and she bit my head off when, upon crossing my legs, a foot stuck out an inch into the aisle. Then, when it was announced that all electronic devices had to be turned off, she lashed out at my new acquaintance, telling him harshly that he risked getting thrown on the tarmac if he didn’t turn off his cell immediately. “I’m just finishing an email,” the guy protested, “it’ll take 10 seconds,” but the lady lunged at his iPhone until he complied. Good gravy, I thought, this hostile vibe doesn’t bode well for the short flight from Chicago to Baltimore. As it happened, she lightened up a touch, and made a half-joke when the ride got bumpy and she had to take one of the seats in my row, which was “messy” with copies of The New Criterion and The New York Review of Books. I removed them for her comfort, but she quickly said, “Hey, you’re a little slow on the uptake, mister.”

I hadn’t flown United since the mid-80s—back when airline travel was sort of fun—since the company, through utter incompetence, screwed up my reservations and I wound up as a temporary vagrant at O’Hare for 14 hours, but on this particular trip, planned at the last moment, I had no other choice. And, truth be told, all U.S. airlines are awful (everyone I know has at least one carrier on their personal blacklist), an embarrassment compared to the better European, Asian and Middle East outfits, which even in an era of reduced expectations, at least attempt a veneer of hospitality.

Every American frequent flier knows that traveling by plane now is no different really than Greyhound; it’s just a lot faster and more expensive. I exaggerate only slightly: getting to and from by bus is, the first time, a grand sociological lesson, and on following trips simply becomes a blend of barely literate hobos sitting next to you, desolate one a.m. pit stops, greasy spoons where not a single waitress has that mythological “heart of gold” and getting stuck in traffic jams just when the lumbering vehicle is getting especially ripe.

Shortly before Jimmy Carter was inaugurated, I let Greyhound do the driving for me on a schizo trip from Denver to Los Angeles, with a continuation two days later from there to Santa Fe and ending up in Houston. As we were nearing Phoenix, a Native American—back then, called an Indian—who’d been bugging me all the way from L.A., finally snapped and held a knife to my throat demanding a bottle of quasi-fancy tequila a friend had given me for Christmas. Understandably, in such tight quarters I surrendered the booze, he got sloshed and then began terrorizing other passengers, when finally the seen-it-all driver tossed the bum off the bus, right on a highway in the middle of nowhere. It made for a good story, but overall, it sucked.

Anyway, there are perks to even a very quick trans-continental flight, in this instance, seeing Seattle, however, briefly, for the first time. I’d never been to the state of Washington, and my age, picking up a state—I’m now up to 39—is an opportunity that doesn’t come along often. (It’s doubtful I’ll ever complete the cycle, since however pleasing that accomplishment might seem in theory, I just have no interest in seeing Kansas or North Dakota. On the other hand, it’s a blotch on my travel record that, aside from pit stops on flights, I’ve never been to Ohio or Michigan.) My pre-conceived notions about Seattle were partly dashed, mostly because I was astounded at how dirt-cheap the city is. For example, I stayed at a new Four Seasons, and my large and quite spiffy room cost a third of the price at the hotel’s Manhattan, Boston and D.C. locations. At the airport, on the way home, I bought an iced double espresso and bottle of water at Starbucks; later, at O’Hare I made the same exact purchase and it was three bucks more. The cabbies in Seattle were uniformly cheerful—if a bit too chatty—and actually appeared to revel in their role of ambassadors to the city.

I did find it vexing upon arriving at Sea-Tac airport, which was not only confusing, but almost like Singapore in its restrictions on smoking. On very rare occasions in the U.S., and some places overseas, you’ll find a smoking lounge inside; I didn’t expect that in blue-state Seattle, but upon leaving the terminal it was unsettling to hear announcements about the ban on smoking almost everywhere, even outside. I never did find the designated patch of land for fellow pariahs, so risked the wrath of authorities, not to mention nosy pedestrians, and lit up near a parking garage. A far cry from the ubiquitous signs at O’Hare that admonished passengers to cover their mouth when coughing, as if consumption and tuberculosis were claiming lives across the state of Illinois.

Something I think about fairly often is the regression of travel in the modern world. Forty years ago, if you hazarded a guess about the future, it was a given that airplanes would be incredibly fast—maybe a two-hour trip between New York and L.A.—and if a Jetsons-like landscape wasn’t in the cards, it was inconceivable that taking a trip, for pleasure of business, would be such an ordeal. Don’t blame Obama, Bush, 9/11 or cyclical recessions: the demand simply doesn’t exist.