The Man Who Played With Trains

Lionel Cowen made his toy trains a solid part of American middle-class boyhood. 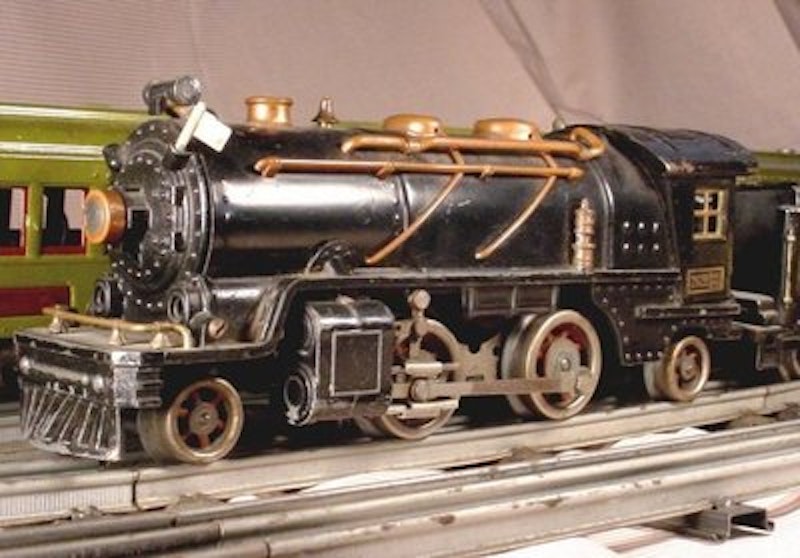 In 1965, The New York Times wrote that Joshua Lionel Cowen had made the Lionel name “the third wing of Christmas, along with the evergreen tree and Santa Claus.” Even now, for many of us, a Christmas tree, however laden with colored lights, however lavishly tinseled, seems incomplete without an 027 model train running beneath it on a circle of steel track.

Once, American railroads dominated popular culture because they were the only means of fast land transportation. Now there are other ways to get there from here. They seem less important, and toy trains share the marginalization of their prototypes. Yet millions of us played with toy trains half a century ago, particularly those manufactured by the Lionel Corporation. For perhaps a decade after World War II, the technical, managerial, and promotional genius of Joshua Lionel Cowen, founder of Lionel, made his toy trains a solid part of American middle-class boyhood.

In 1952 alone, Lionel produced 622,209 engines and 2,460,764 freight and passenger cars. Ron Hollander's delightful, lavishly-illustrated biography of Cowen and his company, All Aboard (published in 1981 and reissued in 2000), states that Lionel's 1952 production eclipsed “the nation's railroads, which had a mere 43,000 locomotives and 1.8 million cars in service.”

Joshua Lionel Cowen was born on Henry St. in Manhattan's Lower East Side on Aug. 25, 1877. He preferred playing ball, bicycling, hiking and tinkering with mechanical toys to formal education, and soon became fascinated with electricity, its transmission, and its storage in batteries. In the labs at Peter Cooper Institute, he built what may have been (or what he claimed was—Cowen had no false modesty) the first electric doorbell. In 1899, he patented a device for igniting photographers' flash powder by using dry cell batteries to heat a wire fuse. Cowen than parlayed this into a defense contract to equip 24,000 Navy mines with detonators. His ignorance of armament manufacture didn’t stop him. He used mercuric fulminate, a sensitive and powerful explosive. His supplier's deliveryman told him, “The company said you should always keep a good deal around. It's better to be dead than maimed.” He delivered the fuses to the Brooklyn Navy Yard on time by horse-drawn wagon at the gallop.

In 1900, with $12,000 in profits, he began manufacturing “electrical novelties” at 24 Murray St. in Lower Manhattan as the Lionel Manufacturing Co. He was 23. Later, when asked why he’d given the company his middle name, he barked, “I had to call it something.” Business was slow.

He invented a battery-powered electric fan.  He said: “It was the most beautiful thing you ever saw. It ran like a dream and it had only one thing wrong with it. You could stand a foot away from the thing and not feel any breeze.”

He liked the little electric motor he’d designed for the fan and felt sure he could find another use for it. While walking on Cortlandt St., a few blocks south of his offices, he stopped before Robert Ingersoll's toy store. Cowen was intrigued by store display windows, though he found most boring, and Ingersoll's was no exception. It was full of cast-iron fire engines, “balancing clowns and elephants on wheels; wind up boats,” and a tin locomotive on a pull-string, all sitting lifeless. Cowen thought the constant motion of an electric toy might draw a crowd to the window. He looked at the locomotive again. Then he entered the store and sold Ingersoll on the idea that had just come to him on the sidewalk.

He soon returned with the first Lionel train, the Electric Express. It looked like an open wooden cigar box on wheels. The track was made of metal strips set in wooden ties. His fan motor, attached to the bottom of the car, was geared to its insulated metal wheels. Dry cell batteries were wired to the track, which transmitted the electricity to and from the motor. As Cowen later said, “I sold my first railroad car not as a toy, but as... the first animated advertisement in New York, outside of sandwich men and live demonstrators. I sold it for four dollars. Well, sir, the next day he was back for another. The first customer who saw it bought the advertisement instead of the goods.” Ingersoll ordered half a dozen more.

Other stores ordered them too. Cowen had found his niche.

In 1902, he produced his first electric trolley car, sold as a set with 30 feet of steel track. It cost $7. This was not cheap: an industrial worker's wages for a six-day week then averaged $9.42. A year later, he produced his first toy railroad engine and a derrick car with a crank-operated hook for picking up freight loads and swinging them into a gondola car. This was his first operating accessory. In 1906, he began using three-rail track, which radically simplified electrical transmission. Now an operator could build an elaborate track layout with turnouts and reversing loops without complicated wiring. He also produced his first transformer, which reduced house current to a voltage suitable for toy trains, obviating clumsy batteries to power his trains. A year after that, his catalog listed trolleys, steam and electric locomotives, passenger cars and freight cars, all brightly painted and lettered for the New York Central, Pennsylvania, Lake Shore and other railroads.

Cowen did not lack competition. Carlisle & Finch Co., of Cincinnati, Ohio, first made electric trains in 1896. Ives Co., of Bridgeport, Connecticut, had manufactured wind-up trains as early as 1874. German toy manufacturers such as Bing and Marklin produced magnificent electric and steam-powered toy trains. But Cowen beat them because he produced a reliable product, with an expanding line of accessories, and was an audacious promoter, selling his toys as educational because he knew parents needed a rationalization for their purchase: “Knowledge of electricity is valuable, not only as a profession, but as an education, whether one is an electrical engineer or a bell-hanger.” The kids couldn't care less.

By 1912, Cowen had 150 employees. World War I stopped the import of German toy trains and, without serious domestic competition, Lionel became the dominant market player, with its large color catalogs bringing the message to millions. Now Cowen made realistic and increasingly sophisticated toy locomotives, detailed with steam pipes, bells, and whistles. By the late-1930s, Cowen's models of the era’s great locomotives—the New York Central's Hudson, the Milwaukee Road's Hiawatha and the Jersey Central's Blue Comet—started, accelerated, slowed, and stopped in response to push-button remote controls. They pulled an endless cascade of boxcars, hopper cars, tank cars, and passenger cars. In 1929, Cowen unveiled the Transcontinental Limited, which stretched nine feet from its massive headlight to its ornate observation platform, complete with brass rail. It cost $110—then more than a second-hand Ford Model T.

As John R. Stilgoe noted in Metropolitan Corridor, his study of railroads in American culture, Lionel’s catalogs emphasized the trains and their environment: the bridges, stations, signal towers, tunnels, and turntables, all placed among twisting lines of track. Crossing signals with flashing lights, ringing bells and descending gates protected the miniature citizens of Lionel City and Lionelville from onrushing expresses.

Expansion was interrupted only by World War II. By 1945, most Americans hungered for distractions. Cowen's vision of America, as reflected in his trains and accessories, struck the exact chord of nostalgia and progress, and the orders poured in.

Lionel's showroom on E. 26th St. held a huge layout with a four-track mainline. Cars coupled and uncoupled, drawbridges rose and fell, and coal bunkers dumped coal into waiting hopper cars. Tiny men pushed tiny milk cans out of white refrigerator cars. Cattle herded themselves into and out of stock cars. As trains passed through grade crossings, tiny crossing guards popped from their shacks to wave their lantern. Whistles, chuffing sounds, and even smoke came out of the locomotives (the last by dropping a white pill down the stack onto a heating device).

Cowen, who’d handed over Lionel's presidency to his son, Lawrence, loved to spend hours among the crowds, occasionally providing expert advice to customers. Hollander recounts how Lawrence, who lived at 2 Sutton Pl., was awakened by his doorbell at six a.m. one Christmas Day. He found two small neighbors in pajamas, who asked, “Can you fix our trains?” Understandably, their parents were still asleep. Lawrence, in bathrobe and slippers, followed them up to their apartment. The president of Lionel soon had the trains running. Then he wished the boys a Merry Christmas and padded downstairs to bed.

The good times didn't last. They never do. From 1953, Lionel's best year, to 1959, sales dropped by more than half. It was television: Hollander noted that families got together to watch I Love Lucy, not to wire Lionel's new ice depot and watch a tiny man push blocks of ice down the open hatch of a toy refrigerator car. It was aging: as kids grew older, they became more interested in Elvis, James Dean, girls, and cars. And it was the decline of American railroads. Cowen's marketing genius had perfectly fit the nation's mood for perhaps eight years. Then, suddenly, it didn't.

In 1958, the company lost money for the first time since the Depression. In September 1959, Lawrence returned from a sales trip to the Far East to learn that his father and his sister had sold their shares of stock to a group of businessmen led by Cowen's great-nephew, Roy Cohn.

Cohn, who had been chief counsel to Sen. Joseph McCarthy, was practicing law and the art of corporate maneuvering, which he found enjoyable and profitable. Cohn's political skills didn’t make him a good administrator. He lost even more money. Cohn paid $15 for each of his Lionel shares in 1959. Four years later, he sold them for $5.25.

Lionel survives despite a string of bankruptcies and reorganizations. It makes toy trains far more sophisticated than anything even Cowen might have imagined.

In 1999, A&E produced an hour-long show ranking the top 10 toys of the 20th century. Lionel was number four, preceded only by the yoyo, crayons, and Barbie. If Cowen had been alive (he died on September 8, 1965, and was buried within hearing of a secondary freight line of the Long Island Railroad), the old promoter would have screamed in protest. This was unfair. The trains should have come first.