Just so you know, the snow blows. 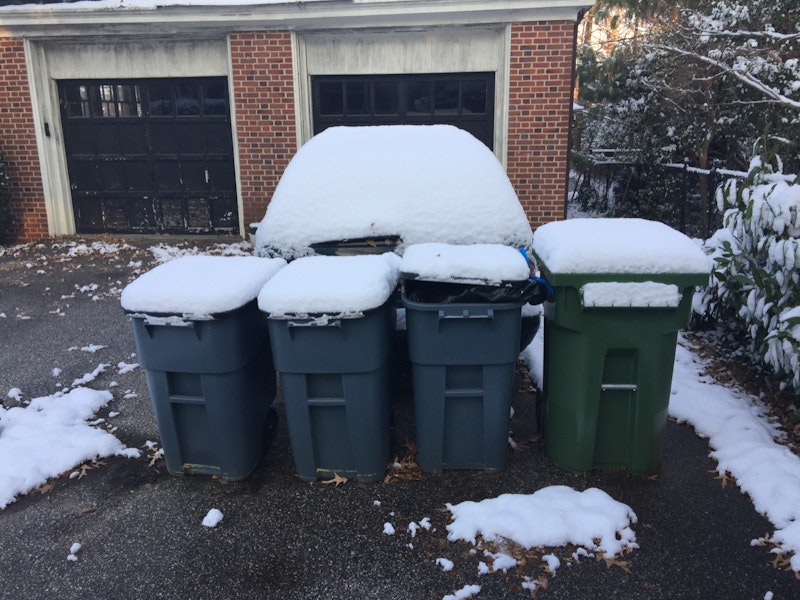 My older son swears that Baltimore’s facing a torrid winter—his info comes from The Farmer’s Almanac—and as a perpetual meteorological dark cloud I’m inclined to believe him, the source of his claim notwithstanding. Above is a picture taken Sunday morning in the backyard of our North Baltimore home, and while the accumulation of snow atop the garbage cans is minimal, I dread an update of the same scene six weeks from now, when a blizzard is sure to hit the Mid-Atlantic region. It’s the law of averages: we got off scot-free a year ago, to my delight, if not the landscapers who rub their hands together when a series of storms promises a very lucrative spring.

As I’ve noted before, I’m not an out-and-out fussbudget when it comes to what was once called—a few decades ago—the “white stuff” by giddy local TV reporters. Eight inches of snow on a late-March Sunday is undeniably beautiful, and then when it vanishes the next day as the temperature springs up into the 50s, it’s over and done with. I’ve been sent to the minor leagues when it comes to shoveling —a plentiful source of income when I was a kid—as my wife (sensibly!) takes seriously the warnings that too many don’t heed about men over, say 55, keeling over in the driveway from the strain heavy lifting puts on the heart, even if your ticker is in pretty good shape. So that’s a bonus as well, although I still feel a little sheepish about not doing my part.

The consternation I’ll be riddled with, awake and asleep, from my toes to ears, if we’re hit with a bad winter will be all the worse for how screwed Baltimoreans were last summer when it rained almost every day and we were blessed with a solitary heat wave. Actually, it’s unfair to speak for an entire city, since I’m certain the majority of citizens were tickled at the lack of sweltering days—without fail, temperatures hit triple-digits during the annual, and hopelessly traffic-snarling and commercialized Artscape festival in July—but as someone who, once I hit 30, reveled in a “soup” climate of 100 degrees with corresponding humidity, I felt gypped. If there’s any justice, at least to me, Baltimore will experience at least two summer months of extreme heat, and even if I feel like a freak going to a frigid movie theater wearing two sweaters—hand on the Bible, naysayers, appearances to the contrary I’m not a junkie—I simply don’t care. And maybe, unlike last summer, our tomatoes will yield a decent crop come August.

I do think Dec. 9th is a bit early for even a mild snow, and though it’s melted now, the certainty of crusty, yellow and brown piles of snow plowed up to the curb, hanging around for weeks puts me in an unnaturally lethargic mood just before the holidays. I can’t say that last weekend’s weather fibrillation caused undue hardship: my son and I on Saturday picked out an XMAS tree at Baltimore’s bustling Green Field Gardening Center, and did it in five minutes, as I wore a hoodie to keep the falling flakes off my head. (By the way, I still get a kick out of seeing people using umbrellas when it’s snowing; it’s a sight that’s comical, since that’s simply not done.) And we did venture to the Charles Theater on Saturday, without incident, to see the surprisingly upbeat Disaster Artist and then the following day, the less admirable Dahmer at the Parkway.

On Sunday there was a tentative “snow day” feeling, which is why, I’m guessing, that I didn’t merely skim Frank Bruni’s New York Times op-ed, but read the damn thing twice. Bruni’s far from the worst at the Times, and I’d have chalked up his autopilot essay on white Americans as a result of I-got-them-old-snow-blues, but it was written before the first flake fell. As Tom Scocca mentioned on Twitter, what the hell was Bruni doing, taking a Texas college student’s anti-white essay seriously when there were 18 more pressing issues to choose for a sermon.

Headlined, “An Abomination. A Monster. That’s Me?”, Bruni was aggrieved that an attention-seeking Hispanic student journalist claimed that he’s encountered maybe a dozen white people. Perhaps fearful that he wouldn’t make the cut should the two of them meet, Bruni, with the standard—if true—explanation that social media has “coarsened” conversation, concluded his column with an apology of sorts. “And if we want white people to be better, we have to tell them that they’re capable of that. Because we are, all evidence in the Oval Office notwithstanding.”

Seriously, evergreen columns don’t have to give off the whiff of a crybaby. I’d have much preferred if Bruni had explained when talking of a person’s death, it’s now referred to as “passed” as opposed to “passed away.” Or maybe the two distinct, and regional, meanings of the phrase “What a pisser!” Or a projection of when the lazy “back in the day” four words might be retired.

I do tend to pick on guilt-ridden Frank more than, say, David Brooks or Maureen Dowd, because I can’t read them. Anyway, now I’m a bit disgruntled, since it’s half past one on Tuesday and I can smell more snow in the air.