The Majesty of the Midwest

Disgusted with white liberals who dismiss the Midwest as “flyover country.” 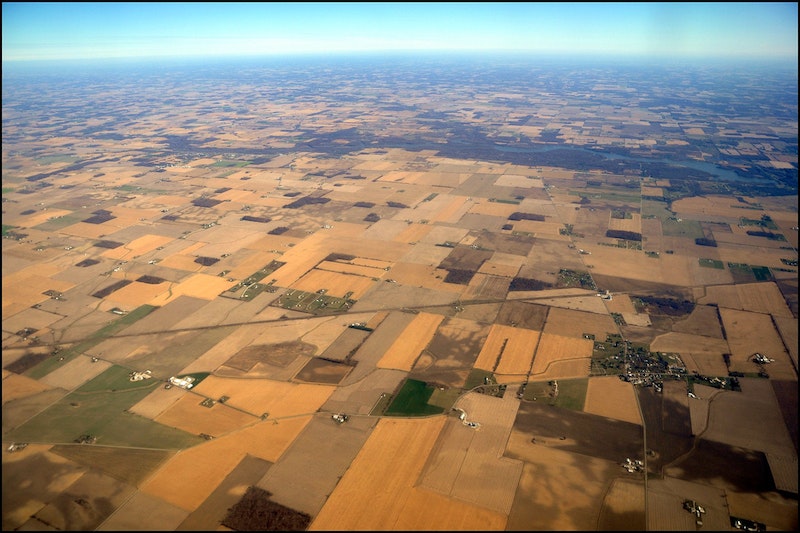 When I was a baby, my parents and I traveled the world (first steps in Italy, threw up in a taxi in London). As my brother and I got older, and especially after moving to Baltimore, we mostly stopped traveling, except for a visit to Manhattan several times a year and long weekends in Bermuda. I’m grateful to remember trips to Paris in 1998 and London in 2000, and the couple of times we inadvertently stranded ourselves in resorts—misjudging how secluded it was (Puerto Vallarta), or a lousy whim followed through on (Atlantis Hotel in the Bahamas). Places like Cancun may as well be in America—besides, a beach can only be so fun.

I went to San Francisco and Seattle a few weeks ago for the first time, and even though we were in and out, it was exhilarating just walking around, hob-legged and obviously from the East Coast, feeling like my knees would give as I clutched a frowned-upon cigarette in my jacket sleeve and tried not to roll down California Ave. like a duckpin. You don’t even have to “do” anything—what does that even mean besides shopping or spending money? Letting a place and its iconography wash over you after a lifetime of knowing the flashpoints from movies and TV is enough. I gawked and stood wide-eyed, in a trance, looking out the window of our hotel at Alcatraz, most of the island conspicuously blocked by a high-rise, the prison invisible but unmistakable because of the opposite side of the bay. It was so satisfying. I don’t know why anyone in their right mind would pick a bubble resort over a city or a town with something to do besides resent other Americans for taking up all the towels. People are boring and scared.

After making a sweeping generalization about the leisure class, allow me another poke in the eye to those who refer to Middle America as “flyover country,” and talk about Midwesterners as if they were barn animals. People are not that different from each other. As a brat, I’d hear “flyover country” and laugh knowing I was born and raised in the center of the universe: New York in the 1990s. I was an elitist who acted like I didn’t want to relate or fit in, but I really couldn’t and I didn’t know what to do. I was very alienated from everyone I went to school with, and isolated, so I figured it was them and not my rotten attitude and lack of perspective. Chewing crow for years and years. If I hadn’t left New York, I never would’ve lost that horrible attitude that too many people have—that Midwesterners are “simple,” that everywhere else is lesser and decades behind the times. Visiting friends at Oberlin College in rural Ohio a few years ago, I skipped enlightening class audits for aimless hours long walks around the actual town of Oberlin. It was one of the most beautiful places I’ve ever seen: endless sky, hypnotic quiet, a pace of life and a space that made me meditative. Grass is green.

Every other time I’ve been in the Midwest was to play music—Indiana, Illinois, Michigan, Ohio, Kentucky. That would be a fatal travel itinerary for most New Yorkers. Oh, there’s nothing to do! They’re hayseeds! It’s boring! No culture! Hayrides and cowhide—get me out of here! The same people who’ll tell you off for mis-gendering someone, not donating to their charity of choice, or being “problematic.” The same people who major in radical feminism and use the term “townie” without any self-awareness. I was blown away that everyone at Oberlin called the people that actually lived in the town of Oberlin as “townies,” and talked about them like they were circus freaks. I’ll remember that for the rest of my life, because the laughter comes in waves. Even the colleges where “problematic” emerged from has its own dirt class, locals regarded as ignorant podunks with no sense of style, culture, or worth. Meanwhile, they’re carrying on about intersectionality, which is fantastic, but it gets bleak when admitting you fucked a townie is like saying you fucked a goat.

Everyone I know who was raised in the Midwest was dying to get out, and it’s easy to understand—in the words of one suburban Chicagoan, “Friday rolls around, you’ve got nothing to do except go behind the 7/11 and smoke pot. That is not a future, that is not a life.” Beaten down by years of that, that majestic sky probably becomes oppressive pretty early. I can’t say I’ve ever spent more than a week at a time in the Midwest, so I’m still in a swoon, enthralled by the vision of platonic America I only saw on TV as a kid—white fences, playing with action figures in your yard, walking around the neighborhood and playing with friends in the woods unsupervised. It’s a memory received but never experienced, and I get giddy just thinking about looking out the window in Indiana, or Illinois, or Michigan and seeing sky for miles and miles. It’s a privileged position, and I would never complain. But grass is green.