I Took a Swing at the Son of Rin Tin Tin

Life in the days of 25 words or less. 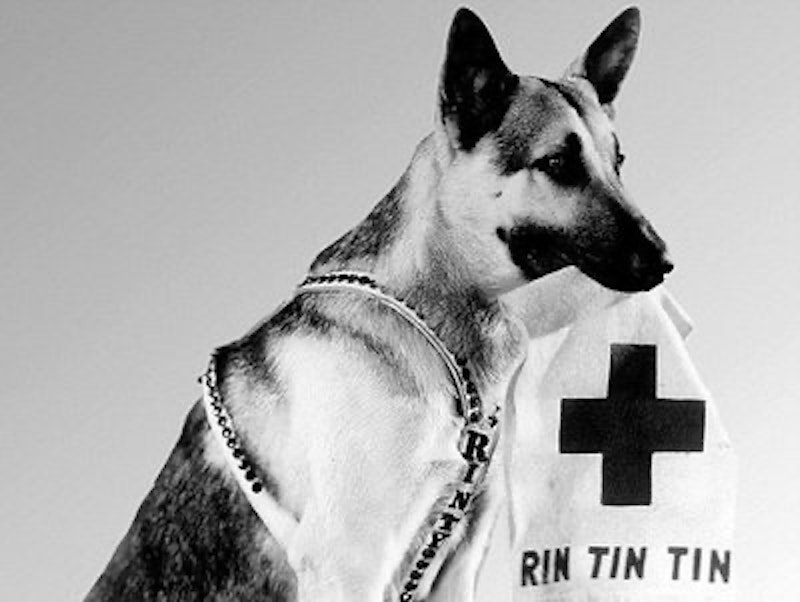 My clever 1950s New Jersey mom won a mink stole for 25 words or less. Our cheerful bakery delivery man won a washing machine on Beat The Clock, a network TV Goodson-Todman game show, for his ability to run relay races balancing precarious stacks of stage dishes. But even Beat the Clock was Amateur Hour compare to Major League contesters like my college chum’s Long Island mom, who made it her business to Shoot the Moon.

She won… A CAR! What kind of a car Johnny Olson? A brand new, shiny red 1960 Plymouth Valiant. Plus trips to Europe. Cameras. TVs. A river of toys. Major and minor appliances. Five hundred silver dollars. Cases of Dr. Pepper. And that was the tip of a swag iceberg that ran deep and lasted for decades. She wrote jingles, solved puzzles, sorted box tops, and kept it all indexed in apple pie order with due diligence that was no job, but one adventurous and rewarding profession.

Now that’s a true story, the telling of which is best left to this extraordinary woman’s family. And while my true confession is less dramatic, it may have more in common with your own contest experience on the playing fields of candy wrappers and cereal boxes, should you have been alive before no-brainer sweepstakes got traction and the music died.

In the beginning, I took a swing at winning a puppy. Not some pokey little puppy, but a son of Rin Tin Tin, wonder dog of movies, radio and TV, dream pal of generations since the 1930s. I think the entry form was one of the cardboard separators dividing layers of boxed regulation size Nabisco shredded wheat biscuits. Or maybe I cut along the entry’s dotted lines on the back of the package. Cut me slack, this was a while ago, when Rin Tin Tin was still on early evening network TV, pre-dating its terminal Saturday morning slot and all-pervasive syndication. Yep, Rinty, Rusty, Lt. Rip Masters, Sgt. Biff O’Hara and Corporal… I dunno he was a bit of a cipher. Not sure I’d admit to remembering the proper name of Corporal Shmorporal.

I do remember my name for the puppy. Well, I entered the contest but my mom helped. I can’t recall our creative conferences for certain, though I’m sure they were at least as animated as those later rave-ups in the office of comedy writers Buddy and Sally and Rob on The Dick Van Dyke Show. No piano asides, no prune Danish, but I might’ve pitched a fit and bugged out my eyes like Morey Amsterdam once or twice. You know, I must confess that my name for the son of Rin Tin Tin was really my mom’s idea, for reasons I’ll reveal soon enough.

I had a lot riding on Rin Tin Tin Junior. At the time we were living in an upstairs unit of an apartment complex that allowed pets, but up to that point we had none. So I insisted on nailing down the deal in advance and demanded a commitment to keep the pup when Railway Express showed up with the purple velvet lined wooden shipping container punctuated with air holes. Initial negotiations were rocky. I promised to feed and walk the dog, pointing out that it would rescue me from abandoned mine shafts. My father didn’t blink. After a few days, following an awkward silence at the dinner table, he caved like an abandoned mine shaft.

All right. My mother warned me not to get my hopes up. That had the same impact as Alan Greenspan’s cautionary remarks about “irrational exuberance.” I considered the procurement of a vintage U.S, Cavalry uniform like Rusty’s duds.  Sure, I knew it was pie in the sky. Still, I vaguely recall some pricey threads in the F.A.O. Schwarz toy catalogue, in the vicinity of the $50 life size tripod-mounted machine gun. No big deal. At least the hats were widely available. However, I had my eye out for one with sufficient gravitas, you know, a cavalry hat for a kid that didn’t look like a cavalry hat for a kid.

Then there was the matter of the dog dish. The dog dish in comic strips often bore the dog’s name. That appealed to me, but personalized dog dishes were not something available at the supermarket aisle pet section. Best case there was a feeble squeaky toy, some dumb cuttlebone or a plastic parakeet ladder. Pet stores, for some reason, we did not frequent as a family. So that remained a loose end. I don’t recall broaching the subject of personalized dog dishes, but it clouded my thoughts, along with Milk Bone sizing options, collar treatments and whether I would refer to the son of Rin Tin Tin as a “Police Dog,” common vernacular for German Shepherds in the day.

I had this puppy. It slept at the foot of my bed. It talked. Not just to me, but to the imaginary flesh-eating dinosaur I anticipated welcoming aboard once we got certain formalities out of the way. You know, like winning the shredded wheat contest and stuff.

Okay, okay, my mom’s name for the son of Rin Tin Tin was Pirate. I won’t kid you; I developed early onset writer’s block. So mom suggested Pirate and I fell right into her trap—parrot, patch and cutlass. Pirate. Just snappy enough to fly as a legitimate entry, but really, I mean, really.

I never bought into Pirate.  Not for a second. Might as well as have been Moon Unit. Or Al Satian. And the longer I didn’t hear from Nabisco, the more I was convinced the fix was in. Not with Big Shredded Wheat. No, no… my own parents set me up and I was robbed.

Smooth move, I’ll give them that. They were as likely to allow me a puppy as a spider monkey and the bearded dragon it rode in on. But I rid myself of that Samsonite baggage long ago. Case closed. Well, almost.

Sometimes I lie awake nights thinking of my almost puppy’s name. Yeah, that one—the winning name for Rin Tin Tin’s son, the one right on the tip of my head, but for a congenital condition of momentarily nothing in the noggin. Funny, I still can’t think of good name for the son of Rin Tin Tin.  So at least in this case, my momentary writers’ block is now going on 60 years.

Maybe I’ll ring up my mother, run Al Satian up the flagpole and see if she salutes.

Or maybe I’ll call her tomorrow. Today she can talk to her mink stole.