I secured my car doors and reluctantly locked eyes with my combatant. 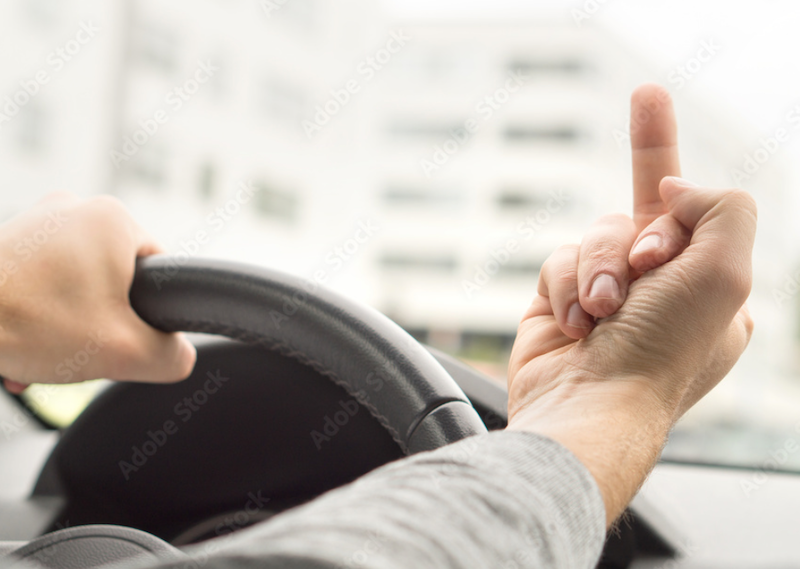 Big city driving is a contact sport. When I start my car each morning, it takes about five minutes before facing the first big question of the day. Do I flip that driver off? This happens dozens of times a day, an inevitable side effect of living in a city of cars. Los Angeles drivers are ruthless. Recently, I witnessed an older Uber driver in a Honda cut off a young woman in a Tesla. When the light turned green, the woman flipped the guy off and sped after him. I have no idea how the confrontation ended, but I give five-one odds it resulted in a screaming match or an accident.

I used to be a serial flipper. Whenever someone rode my bumper or made a reckless maneuver, I rolled down my window and let that middle finger fly. That was before a harrowing incident in Granada Hills. I was driving on Nordhoff Street near Cal State Northridge when a black pickup truck veered into my lane. I honked but the driver continued undaunted. I swerved right to avoid contact then pondered my response. I had three choices. Let it go (the wise choice), pull along side him and give him a disapproving glance (the old man screaming option) or speed past him and flip him off (the dumb choice). I opted for #3, a big mistake.

The moment I gave him the one-finger salute, he cut behind me and began riding my bumper, inches away. I sped through the intersection at Nordhoff and White Oak. He bird-dogged me, erratically shifting lanes and then speeding forward with exaggerated movements as if threatening to ram my car. I sped up. He reciprocated. I slowed. He did the same. At Encino Avenue, I made a quick right onto a residential street. He continued straight. I breathed a sigh of relief. When I reached the next major street, he was waiting for me. He’d taken a parallel route and knew exactly where I’d appear. I made a reckless left onto Devonshire, nearly causing an accident. Moments later he was beside me, honking like a maniac. At this point I was eager to tap out, beyond my weight class and outmatched. I knew there was a police station a few miles away. If I could make it there, I could pull into the parking lot and rid myself of this psychopath.

At Tampa Avenue, we hit a red light. This was my worst nightmare. I sat idling, waiting for the next shoe to drop. I secured my car doors and reluctantly locked eyes with my combatant. He looked to be in his 50s, stocky, Latino. He was screaming unheard profanities, gesturing for me to pull over. He wanted to fight. I looked away. He resumed his honking. When I looked at him again, he flashed a gun. I hit my accelerator and ran the red light without thinking. Thankfully, the intersection was clear.

I spotted a shopping center a few blocks away. That’s when I noticed a police car was parked in front of a Panda Express. I sped into the parking lot at 50 mph. The pickup truck followed. I screeched to a stop beside the cop car and ran inside. A policeman was seated in a corner booth. I hurried towards him, hyperventilating.

“Officer, I need your help. A guy just pulled a gun on me.”

The officer was indifferent.

“Him,” I yelled. I pointed out the window. The truck was gone. The officer gave me a dubious stare.

“He’s in a pickup truck. He nearly hit me. I gave him the finger and he went berserk. He tried to drive me off the road then pointed a gun at me.”

“Looks like he’s gone now,” the officer said. “You need to learn to control your temper.”

“Sure it was.” The officer dipped his fork into his chow mein and took a bite. He wasn’t pleased I’d interrupted his lunch.

“Can I wait until you’re finished in case he’s still out there.”

I sat on a stool by the window scouting the terrain like a gazelle searching for lions. There was no sign of the pickup. I stared at the officer, waiting for him to finish his meal. Finally, he stood to leave. I followed him into the parking lot, thanking him profusely. He didn’t reply. I started my car and pulled onto Lindley Avenue. For the next half hour, I was a nervous wreck. I kept checking my rear-view mirror for the black pickup. It never appeared.

These days, I meditate each morning before hitting the road. I still carry my loaded middle finger at my side like a retired gunfighter. But I have no plans to use it. My flipping days are over.