Jamaica Bay, marshes, and beyond. 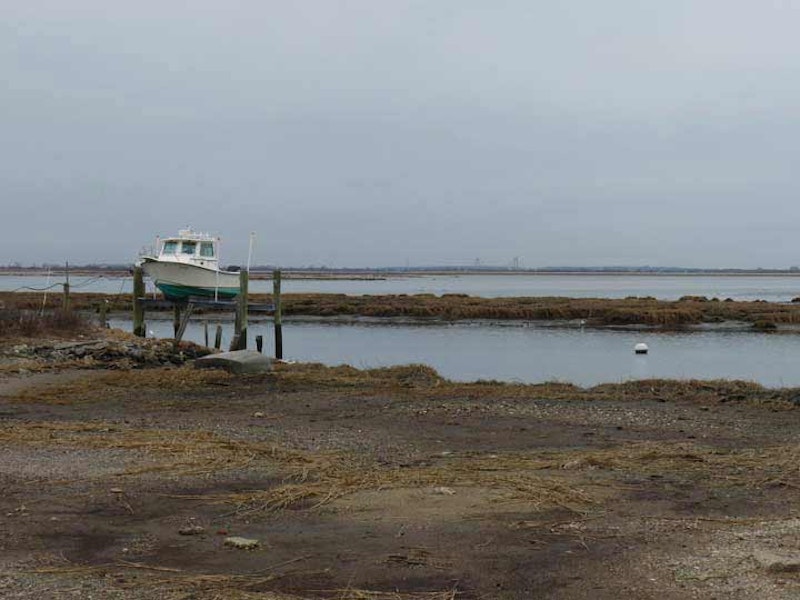 Other than damage caused by Hurricane Sandy in 2012, or a couple of businesses closing, Broad Channel, a neighborhood on an island in the middle of Jamaica Bay, is pretty much the same as I saw during my first visit for Forgotten New York in 1999, again in 2007, and just recently. It’s Queens’ island kingdom, much as City Island is the Bronx’s, and Coney Island used to be Brooklyn’s before Coney Island Creek and Sheepshead Bay were severed by landfill. Every so often, I’m drawn there if only to see if anything has changed: but it changes little and that’s the way its residents prefer it.

Broad Channel (Island) is the only permanently inhabited island in Jamaica Bay, located between Howard Beach in Queens (Long Island) and the Rockaway peninsula. The small town on the island was largely built by the Broad Channel Corporation, which in the 1910s filled in marshes and rented parcels of land for $116 per year for anyone building a summer home in the area, which first gained attention when the New York, Woodhaven and Rockaway Railroad bridged Jamaica Bay in the 1880s. For many years, Broad Channel and three other stops along the NY,W&RR were summer havens for fishermen. By the 1910s, however, Jamaica Bay began to be too polluted for any recreational or commercial fishing. 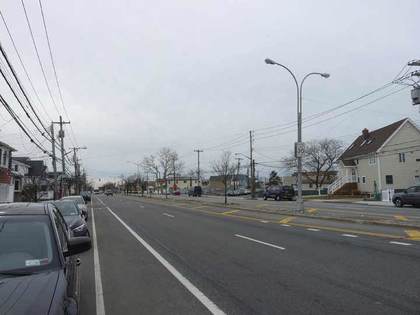 The 1920s brought Prohibition and concurrent rum-running on the isolated island, which had no vehicular connection to the rest of New York City until Cross Bay Blvd. was built in 1925. The boulevard is connected to Howard Beach by the Joseph P. Addabbo Bridge and to the Rockaway Peninsula by the Cross Bay Veterans Memorial Bridge. The Marine Parkway Bridge, later renamed the Gil Hodges Memorial Bridge for the Brooklyn Dodger first baseman and New York Mets manager who lived in Marine Park, bridged the bay beginning in 1937.

When the Broad Channel Corporation went bankrupt in 1939, the City took title to all homes on the island; residents didn’t truly own their own homes until around 1980, when “tenants” finally purchased the land from the City. Broad Channel didn’t have sewers until 1988.

The weather was murky and mild, like much of the winter of 2016, but there was sufficient visibility for decent pictures; the above photo is looking west from Cross Bay Blvd. and 8th Rd. Looking across Jamaica Bay you can make out the Marine Parkway Bridge that connects Flatbush Ave. and Riis Park on the Rockaway peninsula. 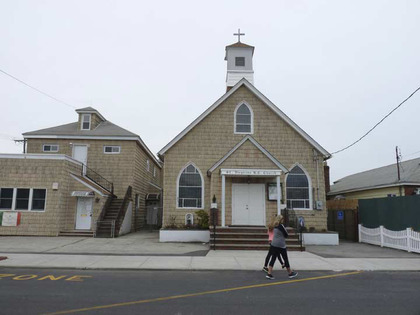 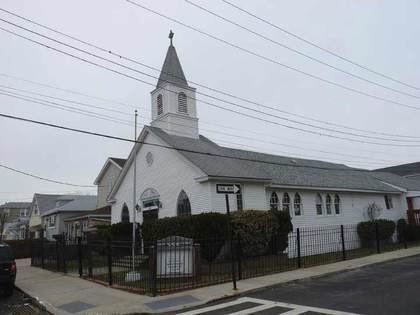 Broad Channel’s only two churches, St. Virgilius Roman Catholic and Christ Presbyterian. are only a half block away from each other on Noel Rd. and Church Rd. The Catholic church and school are modest buildings dating to 1924. The St. Virgilius convent, which appears similar to a regular residential building save for the presence of a cross above the front door, is a few blocks away at Noel and Lanark Rds. St. Virgilius merged with St. Camillus on the peninsula in 2008; when Christ Presbyterian was damaged by fire and storms, St. Virgilius welcomed its congregation. The parish namesake was a medieval Irish churchman and astronomer; he maintained the earth was spherical centuries before it became common knowledge. 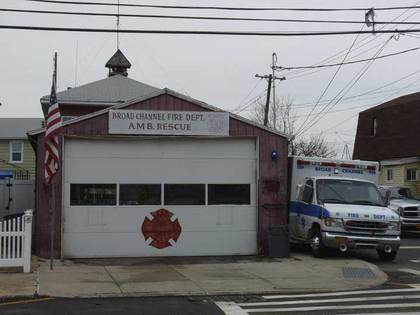 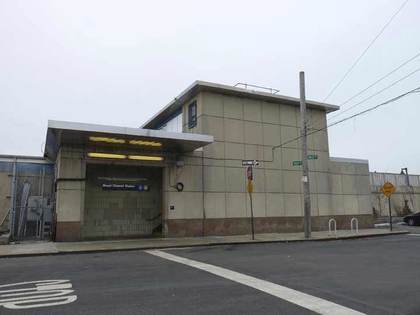 The Long Island Rail Road acquired the New York, Woodhaven and Rockaway Railroad in the early-1900s and ran trains across a succession of wooden bridges until 1950, but after a series of devastating fires the railroad sold the right-of-way to New York City, provided part of the island could be retained as parkland. A new metal bridge was built, and subway trains began crossing Jamaica bay and stopping in Broad Channel in 1956. Until 1975, passengers had to pay an extra fare upon exiting from Broad Channel and the Rockaways, since the stations were so far away from everywhere else in the system. 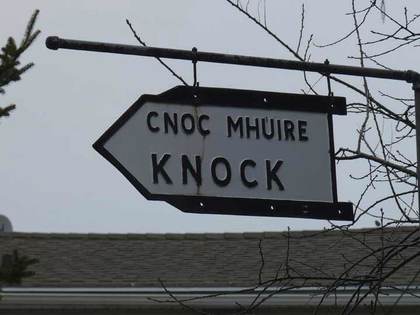 An Irish immigrant influence is still felt in Broad Channel and especially in Rockaway Park, the “Irish Riviera,” and in Breezy Point, said to have the largest concentrated Irish-American population anywhere in the city. Irish language orthography has nothing to do with English. The name of this Irish town is approximately pronounced “croc widda” though some say “k’nok widda.” In English, it’s plain “nok.” 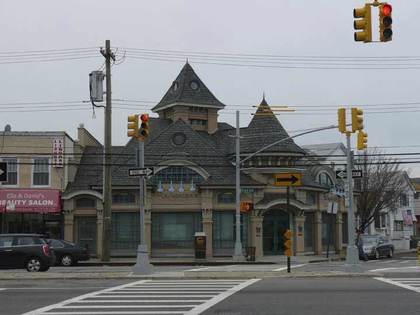 The former Wharton’s Apothecary, on Cross Bay Blvd. and W. 9th Rd., had been Broad Channel’s only drugstore. There are delis and pizzerias but many Broad Channelers drive to Howard Beach or the Rockaway peninsula for provisions. The building is a decent facsimile of the detailed styles favored in the late-1800s, and received an award from the Queens Chamber of Commerce in 2006. There’s no Wharton; owner and builder Charles Howard, a Channeler, called it Wharton’s Apothecary because he noticed that names of many great American companies—Walmart, Woolworth’s, Waldbaum’s—start with the outsize letter W. 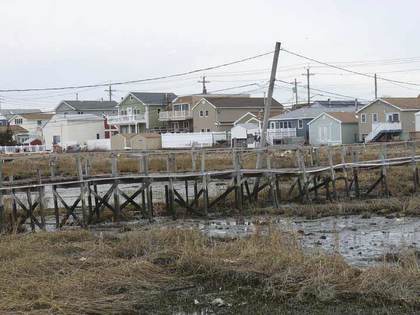 The east end of E. 12th Rd. is where reality gives way to the Unknown and Unfathomed. A rickety boardwalk leads out over the marshes. At low tide, a sticky, muddy mess appears under the almost-swaying structure, revealing long-empty mussel shells. A small sign admonishes visitors not to attempt the splintered, creaking walkway that once accessed waterside docks serving the homes splayed out between the walkway and Jamaica Bay. I didn’t linger long. 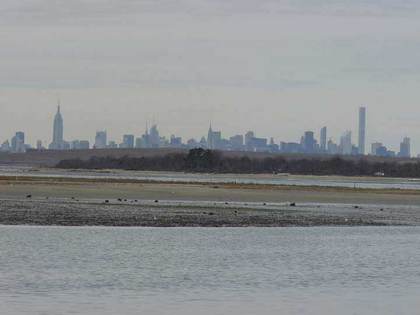 The roads west of Cross Bay Blvd. peter out at the water’s edge, allowing superb views of Jamaica Bay, its marshes, and Manhattan and Brooklyn beyond. At the west end of 14th Rd., I met Dan Mundy Sr,, the chief of Jamaica Bay Eco Watchers, a group dedicated to the preservation, protection, enhancement and restoration of the fragile ecosystem of Jamaica Bay.

Meanwhile, the Jamaica Bay Wildlife Refuge just north of the town of Broad Channel offers one of the very best opportunities to observe migrating birds, including rarities like the piping plover; according to the Brooklyn Bird Club, birds that frequent the area surrounding the two miles of trails include the yellowthroat and redstart warblers, osprey (a small eagle that catches fish), oystercatchers and willets. Herons, egrets, ibis and barn owls make themselves less obvious, though sharp vision and a pair of binoculars and perhaps a spotting scope will see you through. The trails offer a wide, flat expanse with views of Coney Island to the west and midtown Manhattan to the northwest. The Refuge, and Broad Channel, seem a world away from New York City, yet they’re just a subway ride away.