The Yellow Pages made the lives of other people interesting. 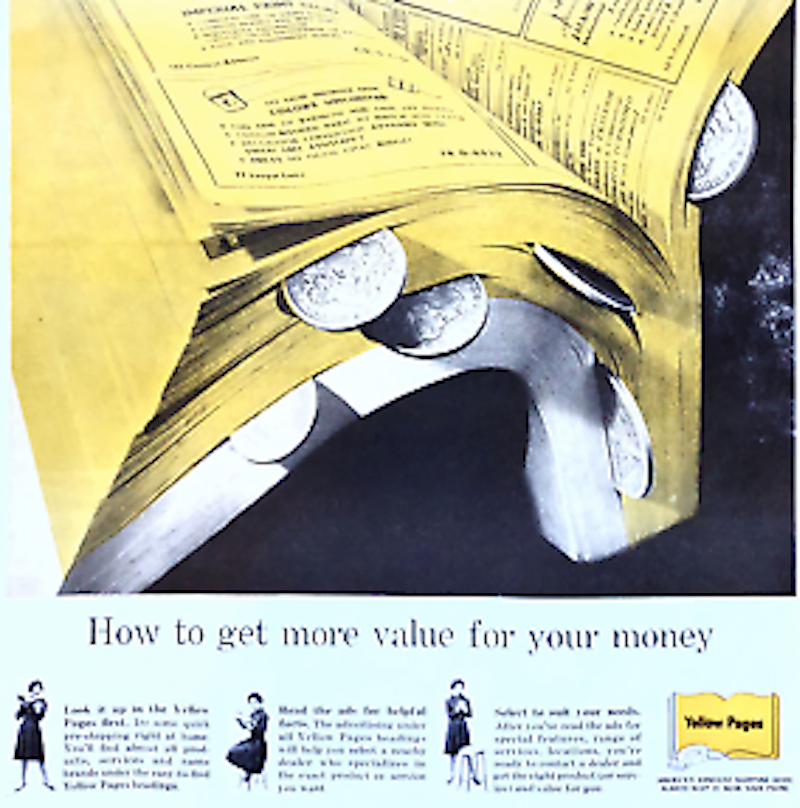 It’s astonishing that I’ve survived so long. How did it happen? I’ve eaten regularly and, except for one memorable night when I was 19 and living at the beach and was evicted from my apartment, I’ve always slept with a roof over my head. And except for a couple of occasions I’ve never been completely broke. I’ve found a place for myself. I don’t feel 100 percent secure about that place, my day-to-day living is accompanied by an awareness that things could go wrong at any moment. I live with an impending sense of doom. But, regardless of that, here I am.

Some, part of the “happy few,” feel that the world’s their oyster and they act accordingly. Others, including me, feel it’s like a No Man’s Land filled with landmines, pitfalls and boobytraps. That’s what I suspect gave birth to the blues. This is similar to identifying with characters in films. I know it’s normal to identify with the hero of a film. While watching Mission Impossible, some imagine they’re Tom Cruise, winning the fights, getting the girl and surviving various narrow escapes. That’s how I felt as a child but now I can’t make that same leap of faith. I now imagine myself in a subordinate role, a background figure blown to smithereens while Tom escapes unscathed.

I recall looking at the Baltimore Yellow Pages as a child and wondering where I’d take my place within its covers. It was magical and terrifying. But I couldn’t imagine where I’d ever fit in. Not only did learning a skill seem impossible but none of the jobs were appealing. But what were the options? It was inevitable that somewhere in between AAA Auto Repair and Zack’s Zippers I’d one day have to take my place.

The Yellow Pages were an inverse schematic image of Baltimore and since that was all I knew, it represented reality. The Yellow Pages provided the impetus for a lot of my childhood musings. I recall looking at the strip clubs on Baltimore St. and feeling an excitement born from curiosity. I couldn’t figure out what went on in those places but enjoyed reading the copy (“Girls! Girls! Girls! Topless Dancing!”) and looking at the black and white ads of women in pasties surrounded by bubbling glasses of champagne. It looked great. I did go into a few of those places as an adult and can say that my childhood musings were preferable, since those clubs were really depressing. I also found the Bail Bond section fascinating. I liked detective movies as a kid and that section represented all that was hidden, seedy, unknown, and criminal in the city. The Yellow Pages made the lives of other people interesting.

I also remember thinking about what would happen if I tore out a section of the book, say the L section, and all the associated businesses would disappear. It was fascinating to contemplate random buildings disappearing from the streets of Baltimore and the ensuing chaos. It was perhaps the closest I’ve ever come to playing God as I held the destiny of countless individuals between my fingers. On the upside, tearing out all the L’s would’ve meant no more lawyers or loan officers. On the downside, no more libraries or locksmiths. But I never dared tearing out any of the pages because I’ve always had a horror of the incomplete and a missing page in the telephone book would’ve represented a chaos I wasn’t equipped to accept.

The beautiful thing about the Yellow Pages was that it tied everything together in a single image. It gave a feeling of unity. It was a democratic image of social organization, where brain surgeons, plumbers and undertakers were all there, equal. No judgments made.