An interview with author of a new book on American marbles. 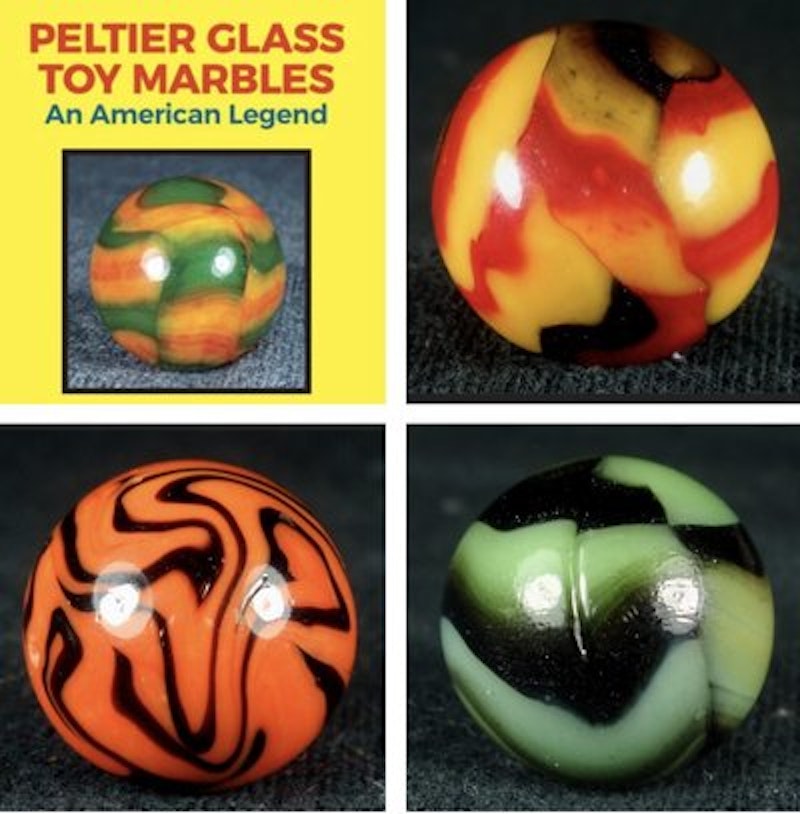 American marble fans, rejoice. There’s a new volume to pore over for use in identifying some of the classic American marble designs. A beautiful new hardcover volume Peltier Glass Toy Marbles: An American Legend has just been released by Sami Arim, Mike Johnson and Gino Biffany.

I asked Peltier Glass Toy Marbles author Sami Arim some questions about the development of his new book:

Splice Today: What inspired you to take on the marble topic?

Sami Arim: I’m a toy marble collector since childhood. In fact, I still have my childhood marbles. Later in my collecting years I picked Peltier Glass marbles as my favorite brand and got very serious in the hobby. I travel throughout the country for marble shows to find marbles for my collection. Naturally I met and befriended the collectors all around the US. I’ve also been selling marbles on eBay since 1999 and have become very good at taking marble pictures. Another important factor was becoming friends with marble historian Mike Johnson, who lives four hours away from me in Central California and has six marble books under his belt and also Gino Biffany, who was born in Ottawa, Illinois, where Peltier factory was and is called “Mr. Peltier” himself. When I put all these elements together I realized I had all the ingredients to create a book on Peltier. There was a huge void in the hobby about these gorgeous marbles.

ST: What are some other marble books that inspired you during your research?

SA: There have been many books on marbles written in the past. Mostly on antique handmade marbles. Whatever was done on any machine-made marbles was poorly done. Even better coffee table books on handmade marbles didn’t have quality pictures. Bob Block's book on Early American Machine Made marbles gave me a good idea on what format I wanted to do my book.

ST: How did you choose Peltier as a brand? Tell me a few quick highlights about the brand and history.

SA: I have been concentrating on collecting Peltier Glass marbles for a very long time. Peltier Glass was a master in glass-making decades before making marbles. The eye appeal, colors and pattern of the marbles, and quality of the glass is unmatched in any other company marbles. The history is very interesting. We tried to cover that part in the book as best we could without boring the reader who probably wanted to see special marble pictures.

ST: What are some of the things you found interesting in your research about American marble history?

SA: The first marble machine was invented in America early 20th century. Since playing marbles was a big part of child's life, there was a huge market for marbles. The competition between early machine-made marble companies created some amazing specimens.

ST: What did you learn as part of your book research that was most fascinating/surprising?

SA: When taking pictures of special collections throughout the United States, I was able to see some very rare marbles that we shared through this book with marble collectors.

ST: Which Peltier marble is your favorite and why?

SA: That’s a difficult question because Peltier Glass made so many magnificent marbles between 1924 and 1939. The company continued making marbles through early 1950s but the book covers only until end of approximately 1939, end of National Line Rainbo style. To me it’s not a color combination or a name. It’s the whole marble including rarity, size, condition, color combination, aventurine, pattern and eye appeal. I can choose easily 20 marbles from my collection as a favorite, but a few include Golden Rebel, Blue Panther, Blue Galaxy, Green Lantern, Superman, Christmas Tree, Liberty, Rebel, Silver Surfer, and Blue Lagoon.