The Last Emphysema Gasp of the Marlboro Man

I've given myself a great gift. 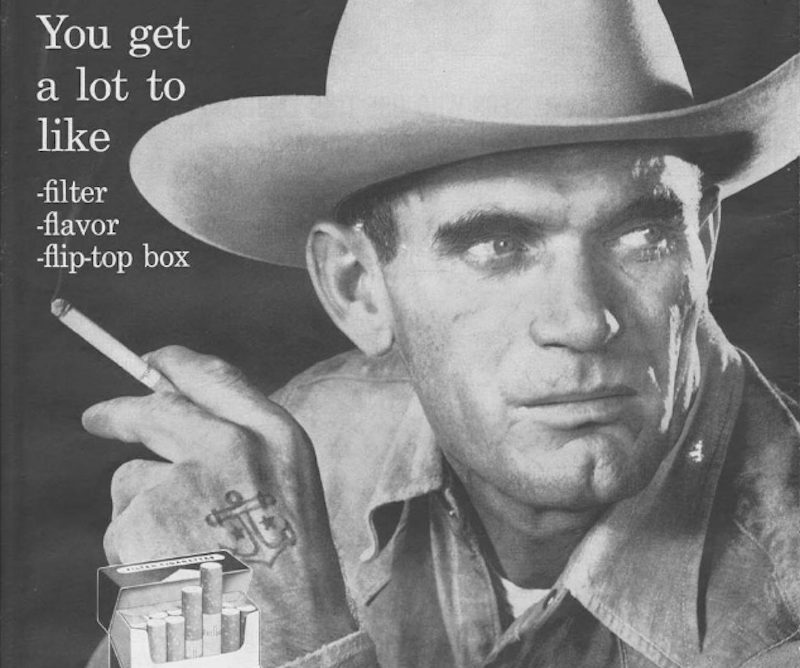 I'm in that last phase of nicotine withdrawal
I can't sleep and have weird dreams
I woke up last night dressed in a white nightgown
There was a commotion at the window
I peeked out saw David Lerner a poet on my fire escape
Apparently attempting to get in
Across the way a SWAT team of cops had M-16s trained on
his head and a police captain in a baseball cap shouted
through a megaphone: "Get off that fire escape now!"
And Lerner who is 270 pounds of angry
shag with tortoise shell glasses and an ax murderer's
wandering eye growled back: "Go fuck yourselves! I'm here
to kill for poetry" and I could see
his point even though I was the intended victim, I could
see his point

Since I've stopped smoking I can't concentrate;
woke up just before, feeling desolate
Came to the typewriter sat down to try to write this poem So,
I might as well tell you the rest: I want to fuck everything in
sight have unbelievable energy now regard fucking as
some do smoking: am prepared to have sex 50 times an
hour for 23 hours a day in every position known to
humankind. I am even prepared to fuck David Lerner if that
will stop me from smoking!

Yeah, I'm working a good program: Have already made
amends to the children of two of my neighbors for the
baseball bat bludgeoning of their dogs; promise to replace the
old woman's arm with a prosthesis as soon as I can afford
one and as recommended in the stop smoking handbook I go
to lots of museums—treat myself nice—do things I've never
done before—went to the Picasso exhibit, stood before his
painting Mademoiselles D'Avignon and when no one was
looking called up a big gob of phlegm—all that mucus
breaking up inside—and spat it right into one of the
mademoiselles' cubist eyes. It was great! I then ran out of the
museum into the park knocked down a hot dog vendor and
positioning myself on the banks of the pond picked off
passing ducks with rocks: I killed several
I treat myself nicely now
I've given myself a great gift
I don't smoke anymore
There's other things I do
I dismember hamsters
I gorge myself on Captain Crunch
I've got contact with a Higher Power
I'm living the spiritual life
My face is out there for everyone to see
No more hiding behind that smoke cloud
I'm making gratitude lists: thank you for my new proficiency
with home repairs—The other day the toilet got
blocked up with too much paper so
I took an axe to the bathroom mirror
knocked open the drainpipe and as the shit-covered paper
flowed out over the floor, I got the roommate
responsible and wiped his face in it and now when he
hears a flush he sighs with loud relief and I laugh good-
natured as Josef Stalin and say: "Remembering that little
nose-rubbing, huh? Ha, ha!" Also lately I've taken to
punching out windows around my neighborhood with a
screwdriver/ground floor stuff mainly
Once, I didn't look before I stabbed and sank the blade
to the hilt in the socket of this young kid's face that
was leaning out of a window but I got away in time
and the urge to smoke left me completely!
I fell to my knees on the steps of a church and thanked God
for lifting the imperious compulsion and now I know there's
more fun things than cigarettes out there like rape and war
and racism and I'm never lighting up again though I may
burn a few crosses to get by/I may register to vote for the
Republicans but at least my lungs are pink and my breath
smells fresh and look at the bright smile I crack!
It's great the girls love it when I chat them up
with the suave knowingness of a Ted Bundy/and I'm leaving
their bodies in ravines/I'm rolling them into unmarked graves
in southwestern deserts/Yes, I've bought me a car I'm learning
to drive at last/and I'm barreling down the road with shot gun
chainsaw garrote instruments of torture because I'm goin' out
there to maim, not smoke I could white-knuckle it but this is
what my Higher Power planned for me: kidnap murder and
torture bunker fun
So I've bought me an inconspicuous Dodge dart
with beat peace symbol seat coverings
And wear cut-off denims with a Born To Be Free
decal and tattered American flag and I'm out there
ready to be whatever people want me to be
A Merry drifter, a charming young guy on the bum
but most of all I'm smoke-free on Route 66
Because I've thrown away my coffin nails
Instead I'm picking off whatever gets my goat
in the landscape/and that's lots of things
I'm pouncing on my resentments with a vengeance
I'm pulling the fly wings off America
I'm bottling my sex urge in a specimen jar
I'm holding childhood captive
in the cellar of depravity
I'm mixing my Maypo with blood
I'm eating my Cocoa Pops
from scoured skulls
I'm boiling head soup on a sterno stove
along the fabulous American road
and it's so beautiful I want to cry,
with a headless armless legless torso
comfortingly buried just a few feet away in a fresh grave all
happy, and me squatting here eating brains
under the Kerouac sky, a smokeless hipster a recovering
smoker and letting those feelings I once tried to stuff with a
Newport or a Camel,
letting those stuffed feelings erupt
like a geyser of blood from a butchered neck,
just letting them flow out as they come and not trying to stuff
them or anything
because I'm powerless
but just letting them flow out
of me and all over the bound and gagged
bodies of my fellow nicotine addicts
because I'm killing the smokers now
I'm ridding the earth of hopeless
tobacco fiends
I realize that as long as a single smoker
is left alive I will want to smoke
because they are the toxic relationships
Bradshaw talks about
they reinforce my low self-esteem
which causes me to smoke in the first place
and being powerless to change that
I'm killing them off one by one
in Mississippi in Texas in Minnesota
in those little towns where you find them perched
like lovers in a Salem cigarettes ad
against Kentucky horse farm fences
with unblemished lips and cherry lips
and a wanton gleam of smokers numbed lust
twinkling in their eyes and it's the eyes I go for first with an
icepick/It's the eyes I show them first—one eye to the other—then the fingers one by one/It's the toes then and the ears and
the nose until I hit the smoker
s hole-mouth and stuff it with
twenty cigarettes and leave it like a totem on the sacred
smoking grounds of Philip Morris America, souvenir
of my spiritual growth!