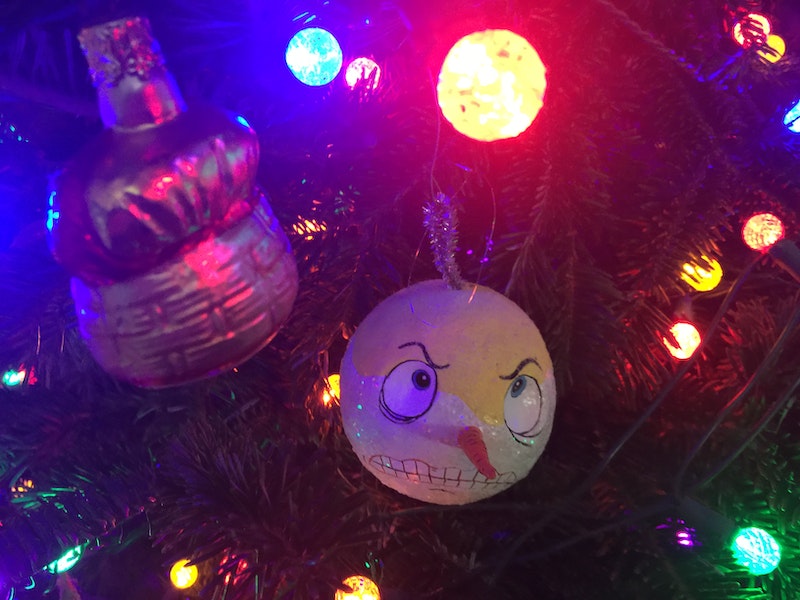 The Christmas tree was decked out Saturday night, and we now have the benefit of its medicinal aroma for about a week, I’d say, before its demise is plain to see. Our family has a scattershot slew of traditions when it comes to holidays—Easter and Thanksgiving get the short shrift—but the Big Dog of the year captures our attention. It’s a group effort: my wife Melissa is the light master, which works out since I’m all thumbs when it comes to laying out strings of sparklies in a neat fashion. On the other hand, my son Booker and I take enormous pleasure in placing the ornaments—a few survivors of World War II and the Depression era, which I marveled at as a boy in the 1960s—and we don’t rush, relishing the 90 minutes or so devoted to the operation, getting lost in back-and-forth patter and our own reveries.

I’ll jump back to that thought, but first I must relate a story from last week, when Melissa was talking Christmas with a friend. She let on, a touch embarrassed, that when it’s time to chuck the tree, we put it out on the sidewalk, lights and all, and let the sanitation engineers take it away. Whether it’s recycled or not I’ve no idea, and don’t really care. Melissa’s friend was taken aback, both at the waste of money and, I’m guessing, harm to the environment. “That’s so American,” she told my wife, and I suppose it is, although probably not very common. (In fact, I imagine moral arbiters might pronounce me a white man for such wanton lawlessness.)

The guilt, if you choose to go that route, falls on my shoulders, for a decade ago, tired of untangling lights—and the concomitant truculence when several no longer work—I decreed that our funds were sufficient to buy new lights each year and avoid the aggravation. (It’s nothin’. Just something I learned in England. [Ed. Note: a shameless crib. This would disappoint Professor Walters.] Another voice in the crowd! I might have to fire myself.)

It’s not so extravagant: unlike, say, razor blades (a real peeve of mine; good thing razor need only scrape chin twice a week) or light bulbs, which have outstripped inflation. Christmas lights, at least at Target, are surprisingly inexpensive. That wasn’t the case when I was growing up—when chicken, too, was pricier—although my mom thought penny Tootsie Roll lollipops were a gyp. I always wondered what the thinking was there, a penny’s the lowest rung, unless she was nostalgic for the ha’penny.

Long ago, in Huntington, my family of seven also had the spirit of Old Fezziwig in our hearts at this time of year, and my dad, several days before Christmas, even put up a small outdoor display. It’d be after work, so it was dark, and he’d enlist one of the boys to help him wrap big bulbs around the one bush in our yard that wasn’t shabby, and then it was onto the house’s shingles. The sheer patience of my father still leaves me short of breath: it was always freezing, of course, and the project wasn’t an in-and-out exercise.

It lasted a solid two hours, mostly because of the inevitable three or four bulbs that became duds in the preceding 12 months, which meant that none of the lights worked. I remember being dispatched to the attic to find spares, some of which worked, and scurrying back outside to hand them to him high atop the ladder. After several attempts, it all worked out, and I’d take my frostbitten digits inside, a hot chocolate with a big old marshmallow my reward. The same scene played out in earlier years with my four older brothers, and on the occasions we’ve recalled this ordeal, we all raise a toast to our stoic New England-bred dad, who not only never swore, but didn’t mind putting those fucking lights up. Never a complaint from Dad, even when our mother packed a bag with two peanut butter and Velveeta sandwiches for lunch at his car wash.

Does that add some fabric to my later-in-life practice of purchasing new Christmas lights each year? Oh, probably not in today’s rancid cultural environment for unearned guilt, usually foisted upon an innocent like me by fifth-rate Jiminy Crickets whose own houses are made of the most crinkly glass.

Anyway, for some reason this year, Booker and I skipped our usual listening to Highway 61 and Blonde on Blonde, and trimmed away without music. Not a problem: I harmonized with Bob Dylan, a duet in my head of “Open the Door, Richard,” with these spare, out-of-Americana lines: “Now, take care of all of your memories, said my friend Nick/And remember now you cannot relive them/And do not forget that when you go out to heal the sick/That you must always first forgive them.” As it happened, my older son Nicky wasn’t around for tree-dressing, and I chuckled thinking back to when he lived at home and was nearly useless for hanging ornaments. He’d sit in one of the sunroom’s easy chairs, participating in the chatter, and maybe affix three or four favorites in prime spots. “We did a great job, guys,” he’d proclaim upon the finish, and I’d grin like a rooster and say, “Indeed we did, Top Cat!”