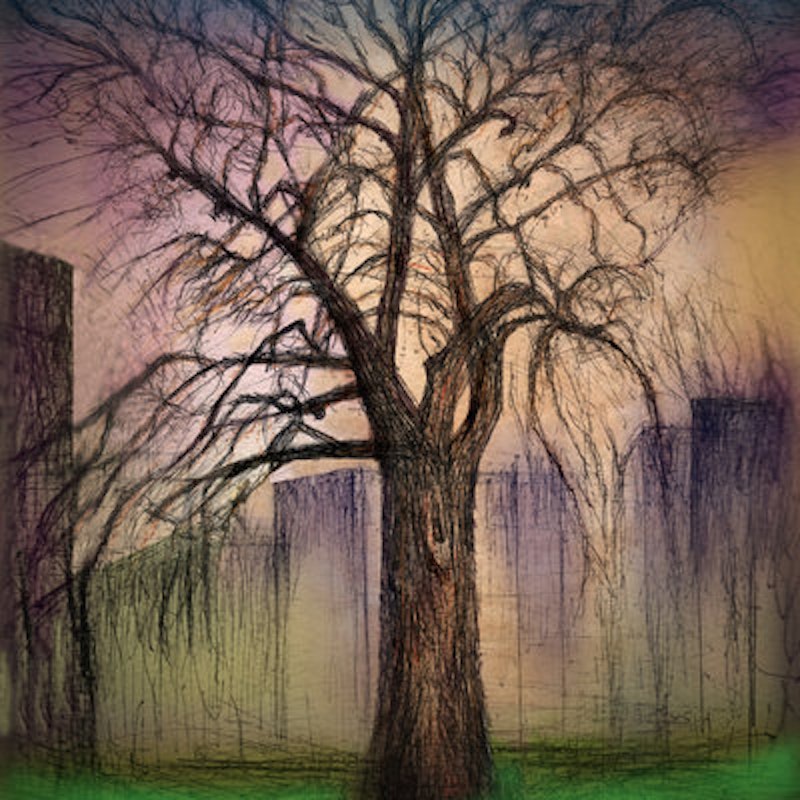 A noble English Elm guards the northwest corner of Washington Square Park like a rook on a chessboard. The tree’s majestic silhouette fills the pale late afternoon sky overshadowing the park. Students cautiously walk under the tree. They notice its monstrous branches and wonder if one might reach down and grab a friend. It’s that kind of tree.

The enormous piece of wood, sublime in beauty, shares a dark history with the park. “Elma” or “The Hanging Tree” is 110 feet tall and 338 years old. According to legend, people were hung from the tree—although no public records exist to confirm the rumors.

New York City was a different environmental tapestry in the late-1700s. The city’s pastoral edge provided a growing home for churches and cemeteries. Washington Square Park was a marshland fed by the Minetta Stream converted to a clumpy potter’s field. The graveyard quickly filled to capacity, mostly the poor, slaves and yellow fever epidemic casualties. Death was always near the tree. Executions were performed about 500 feet away from the elm—where the park fountain is today, a wooden gallows once stood.

On July 9th, 1819 at the gallows, thousands of onlookers gathered, some climbed surrounding trees for a better look. Rose Butler a 19-year-old domestic slave would be executed. Butler allegedly set fire to her employer’s house. Arson was a capital crime at the time and it was unusual for a woman to receive the death penalty. In the summer heat, a hood was placed over her head before the noose. Like the snap of a twig, the trap door dropped and Butler’s body hung silent.

The dark watershed moment presented a new set of challenges for pre-Civil War America. It drew attention to capital punishment, how it was handled, along with the problems of living in a segregated society.

In 1825 the gallows were torn down, the mass graves covered, and for a brief period of time the area became a military parade ground. With the city’s increasing development, Philip Hone, then one-year term New York City mayor, wanted to recreate London’s West End. Within a few years, Washington Square Park was declared a “public space.” New York University (NYU) purchased the surrounding land in 1832 and built a quad campus adding prestige to the area.

Decades later, on a balmy March 25, 1911 a wisp of smoke surrounded the elm around 4:40 p.m. On the park’s northwest corner, The Triangle Shirtwaist Factory was engulfed in flames. Within minutes doomed victims fell to their deaths, sometimes three and four at a time as helpless crowds watched. Trapped workers, mostly women between the ages of 17 and 25 tried to escape but found blocked doors. There were no water buckets in the factory. Firefighter’s ladders were only 60 feet, unable to reach the top floors.

From the inferno’s ashes, the loss of 146 people brought to light the inhuman dangers of sweatshop working conditions. Public outcry made sure the deaths weren’t in vain with vigorous new safety regulations and government ordinances. A garment workers’ labor union formed. The building survived and is now NYU’s Brown Building of Science—a campus with a history of student suicide clusters.

Over days that began calm and ended turbulent, both the tree and the park have stood the test of time. Every day in Washington Square Park students, chess players and performers mingle with tourists and locals. It’s hard to imagine these tragedies occurred in what appears to be such a pleasant setting. Today, few are aware that underneath the shadows of the park’s gardens, grass and benches, an estimated 20,000 bodies still lie buried. Their forgotten souls unveil a secret sanctuary of unheard distant voices and lurking spirits.