The Hottest Take Ever

A Millennial media hot take writer grapples with the scoop of a lifetime. 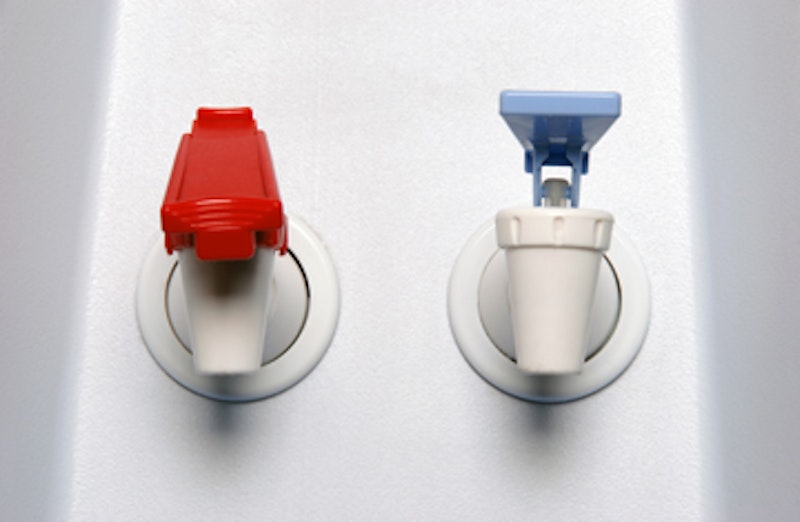 How did he get here? Brian Powell wondered. The small office where he worked had three cubicles, and he sat in one of them. His cubicle was adjacent to the water cooler, and he spent most of his shift listening for its tell-tale glug and recording the time when he heard it. Dozens of yellow legal tablets were filled with notes on this subject. Perhaps this work would enable him to fashion order from chaos. Once the operation of the water cooler came into relief, things might change. And oh how he needed a change. He couldn’t keep writing these hot takes.

The cooler hadn’t glugged for several hours, though, and Powell’s interest in it began to wane. Since it was early afternoon and he was already tired from all the nothing he did in the morning, he allowed himself to doze off, only to be startled awake when he felt the Chief’s clammy, calloused hand on his neck.

“How are those articles coming, Powell?” he asked. “Our site sure could use the content.”

“Fine, fine,” Powell replied. He wasn’t exactly sure what articles the Chief was asking about, since he hadn’t done any real reporting in his entire six-month career. He was a take man, pure and simple. “The takes are hotter than ever,” he said after a lengthy pause. “‘Is Lana Del Rey rey-cist?’ That’s one I’ve got. Could be great, but we need to phrase the headline as a statement, not a question. Wokepoints from here to eternity. And I’m working on some hashtags we can use to flood the zone and boost my own Patreon side hustle in the process.”

“Don’t mean to rain on your parade,” the Chief began, only to trail off after the flickering of two long bug-filled fluorescent lights seized his attention.

“Huh? Yeah, I’m real swamped with that one about rey-cism,” Powell said. He flipped his calendar from April, which was last month, to May in order to emphasize his point. “Not to mention all the other pop stars who are due for hot takedowns for one reason or another. I’ll get them all, Chief.”

“Forget that trivial blog boy shit, son. I’ve got a real story for you,” the Chief said. “The kind of honest-to-goodness reporting that could turn this shop around and make my life something other than a constant source of embarrassment for the ol’ ball and chain.” He patted his right leg for emphasis, since he was wearing a house arrest ankle monitor that he often referred to as “the ol’ ball and chain.”

Powell turned his attention to the computer, where his attempt to minimize Solitaire had caused the screen to freeze. “Hey, when are we going to upgrade Windows 3.1x to 95? I’m losing my pieces and hot takes all the time,” he said.

The Chief pointed to a small office in the corner. “How many times have I told you to ask Georgiy in Tech Support to back up your work on the tape drive? Or to get a floppy from the office manager?”

“Since when do we have an office manager?”

The Chief toweled his forehead with a McDonald’s bag that lay discarded on the edge of Powell’s desk, and then paused to consider the question. “I might be wrong, but I believe our office manager is that one girl I hired from the staffing agency. Cammy Camden or something like that. Remember her? A real ripe tomato, if you get my drift, but don’t go telling Georgiy in HR lest that H1B visa bastard go off half-cocked and #MeToo me because my #TimesUp. We’d have to erase the tapes à la Tricky Dick and his ‘dirty tricks.’ Say, what’s in those yellow notebooks? Looks like some mighty important Deep Throat-type reporting.”

“Facts and data and so on,” Powell said. “Hashtags, too. Things the kids and hipsters like, things you can punch in the Tweetdeck to build your social media lifestyle brand to appeal to more kids and hipsters.”

“Good for you, Howell. That’s the kind of legwork we did back in my day. I was always out pounding the pavement, searching for the next big scoop. Even back then it was all about churning out content for the kids and the hipsters. They sure did hate that son of a bitch Nixon, so his ugly mug was great for business. Sold so many papers I used to be able to afford the mortgage on a house with a two-car carport.”

Powell ignored him. What he was working on with this Lana Del Reycism take was big, bigger than whatever idiotic 4000-word research assignment the Chief was about to suggest. “I don’t want to oversell it, but Reycism could be the one. It will go viral, Chief.”

The Chief nodded. “Well, put that on hold for a minute. The best stories always need to percolate, even these breaking scoops. Now here’s what I’ve got for you: Have you ever been to one of those new big-box retail stores? One of those ones with the dry goods, baby clothing, produce, and such?”

“That’s the ticket. That’s what I’m talking about. I went into one of those for the first time the other day and couldn’t believe what I saw. Aisle after aisle of products, Howell. Five hundred brands of baby food. More Milk Duds than you could ever eat, too, and they’re way cheaper than at the theater.”

“Yeah, they sell a lot of different things there,” Powell said. He was pleased to see that his solitaire window had minimized without crashing the system.

The water cooler glugged. Either Oscar or Georgiy (from both Tech Support and HR) must have decided to quench his thirst.

Powell made a hasty notation on one of the yellow legal tablets. “Chief, I’m a little busy here sliding into some Suicide Girl-looking barista’s DMs on account of my awesome verified blue check. Anyway, this sounds like the kind of assignment that J-school blockhead Ohvuh Bimmin would appreciate. He’s more of a shoe leather newshound.”

An old-schooler like the Chief wasn’t about to take no for an answer, not from his office manager Camden Camden and certainly not from Brian Powell. “Kid, I always say you’re like a son to me, because when you sparkle, you shine. When we break this story, the company will be back in the big leagues. No more of this bush league Millennial media search engine optimization monkey shines, no more paying my mortgage with a combination of clickbait, promoted advertisements, and secured credit cards…”

“Alright, I’ll listen. Boil it down. Give me a taste,” Powell said. “Where exactly is the story here?”

“The baby food jars. It’s a fraud on the consumer, Howell. It’s a disgrace to the legacy of the great powdered-wig guys who founded this country. This is some ProPublica, Pew Research Center-level material.”

Oscar Berkman rounded the corner, a paper water cup in his hand and an idiotic smile across his big block of a head. “What’s the haps, fellas? Got a little bulls-in-the-pen session going here, I see.”

“Bimmin, where’s that story I wanted from you?”

“I gave you that assignment six weeks ago!” the Chief said. “Snakes alive, why do I even pay you people?”

“Chief, you don’t even pay my kill fees. I haven’t received a check in 18 months. And anyway, I’ve been under a lot of pressure,” Oscar said.

“That he has, lots of pressure,” Powell agreed. He had returned to playing solitaire but felt compelled to substantiate his frenemy Oscar’s claim. He didn’t think the claim was true, but since when had things like that mattered?

In spite of this remark, Oscar and the Chief continued to argue. The people around Powell always seemed to argue. He wasn’t entirely sure what they actually did for a living or what any of it meant. The temperature in the office was a balmy 68 degrees and it seemed impossible for things to continue as they had been going.

The night before, Powell decided there were 16 reasons to believe in God. Fifteen of them didn’t make the least bit of sense and the last one had something to do with the Boston Red Sox winning the World Series. It was all very stupid and pointless, yet try as he might, he couldn’t think of anything that was even less important at a time like this.

The Chief poked a fat finger into Oscar’s chest. “You’d better straighten up and fly right, Ohvuh. Look at Howell’s desk. It’s filled with important notes, which makes it clear to me that he’s on the right track. He’s showing his exhaustive busywork like any good, red-blooded American. What about you, you Gen-X slacker? Are you on the right track?”

No, it wasn’t easy for him. Not in this context, anyway. In another setting, another world, a more perfect world, a world that wasn’t this one, Oscar might be perceived as a real go-getter and Powell might fall in love with Camden Camden after a Nora Ephron-penned rom-com meet-cute. And the Chief? Why, what a fine Ed Asner-as-Lou Grant kind of father figure he could be!

Powell had results, months of them. After all, he had tried to understand the water cooler in the most systematic way possible. That story was important, almost as important as Lana Del Reycism, and he needed to share both of them with the rest of the world.

Oscar turned to Powell. “I’m so tired, Brian. Man, I’m so tired. I can’t write another goddamned 5000-word story. What’s the point? Nobody reads anymore. They just rush to share articles about the same five or six topics while competing to see who can be the most prim and proper per whatever standards of decency obtain in their little corner of extremely online. Do you know why, Powell? Can you tell me?”

The Chief grabbed Powell by the shoulders and yanked the scrawny writer’s child-sized head into his ample bosom. “Can’t you understand why this scoop matters, you punks? The baby food scoop, you know? We’re talking a Pulitzer, boys. We’ll be back in the news game. Fifty-fifty-fifty, even stevens! Don’t you know that’s what this is all about?”

Just then, the water cooler glugged. Trapped within the folds of flesh around the Chief’s chest, it took everything Powell had left to keep from laughing hysterically. “No,” he mumbled into the Chief’s loose, saggy pecs. “Dude, I don’t know anything at all.”