The Gypsies in the Pointy Towers

Those in the Gypsy Mafia are nobles of feudal times. 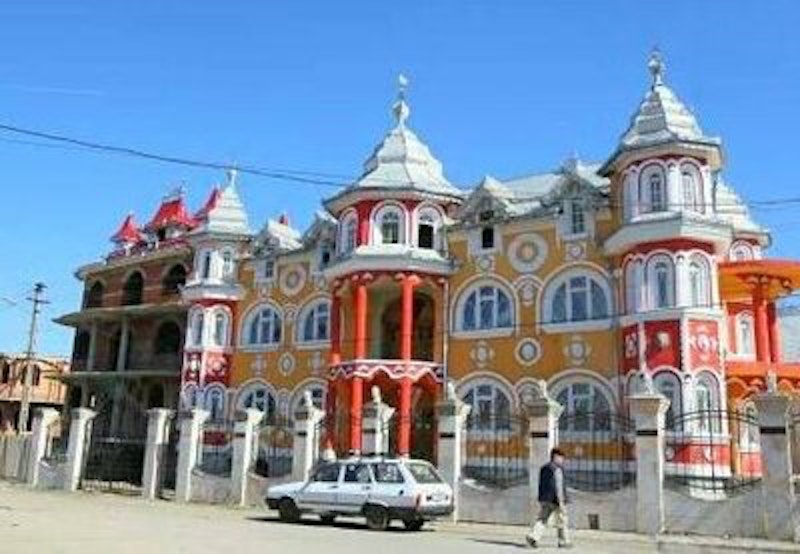 Gypsies in Romania, like every other ethnic category, come in three groups—the poor, the middle class, and the rich. I’ll share some interesting questions about our wealthy gypsies. How did they obtain the funds and building permits to construct large and luxurious villas with pointy towers? Why build villas with pointy towers? Because they want them to look like castles.

How did they manage to raise such buildings? How could they afford them in regions where the economy has been moribund for decades? Especially since the families living in these places, more often than not, attack journalists and photographers when they’re asked about their jobs, incomes, and tax obligations. The language they use also makes one wonder how they generate so much money. The swearing and the threats aren’t the problem. The issue is their poor grasp over basic grammar. That, and the fact they also claim welfare benefits, while showing off large rolls of cash and running around in expensive foreign cars (BMWs are popular). Accompanied by traditions such as donning as much gold as possible, and having BBQs in the cemetery during the holidays. Nobody got rich in this country off hard work. This was true during the communist years, during the transition years, and it’s still true today.

Where does the money come from? It’s from activities such as: organized beggary (the largest earners are children), muggings, protection rackets, theft (emptying stock rooms of materials and equipment, and selling it at the scrap yards), the shipping “business,” money lending, drug trafficking, human trafficking, and prostitution.

How did they start out or gain so much footing and leeway? Post-1989, after the end of Ceausescu’s regime and his faux trial and execution at the hands of his own people (traitors within the party), the so-called transition period began. The second line within the party delivered a counter-revolution to the revolution. They concocted various schemes to dispense with the government’s assets. Their most successful formula was to pick various names from the party nomenclature (people with allegiance and dirt on them, so they could be controllable), give them loans through various means (including some obtained from the outside), so they could buy state enterprises and liquidate them as fast as possible. In other words, profits were privatized and losses were socialized. A little later they discovered that the fastest way to become large landowners and plutocrats was to simply manufacture inheritance documents and claim to be the “lawful” heirs to the various lands and landmarks before the arrival of the collectivization after WW2.

Romania is the only former socialist country in the Eastern bloc that chose this route—that chose to privatize in this manner and to such a large extent, creating overnight a renter and landless class. How do the Gypsy mafia families come into this? Simple. The corrupt administrative and political figures used them as henchmen to carry out their looting schemes. Every brain with ideas needs a strong arm to do the work. And you have to take care of the help, which means giving them a piece of the action and looking away when they break the law—even when they break it for their own petty interests. It’s all about doing favors and obtaining favors.

When trade with the outside was liberated, speculation flourished. Cash and merchandise off the books meant opportunities. People were selling Turkish jeans and other wares at street corners, and they regarded themselves as “business owners.” So as private initiative went up and money exchanged hands, the Gypsy mafia clans seized the opportunity. Local businesses had to pay tribute. Since the authorities gave them room to maneuver, their local networks grew, extending into nearby towns and villages—sometimes giving way to clan on clan warfare. Fortunately, this meant the use of melee weapons and rarely firearms, due to the country’s strict gun laws.

They managed to diversify their clients as well. From people like priests, doctors, and lawyers requesting prostitutes (adults and minors) and drugs, to politicians hungry for votes during election times—votes which the mafia clans could ensure. And not just local politicians: it goes to the president himself. Here’s Traian Basescu (who stood ten years in power 2004-2014) with his wife alongside the infamous Bercea Mondial. The president’s security and intelligence staff knew who Bercea Mondial was and that he would attend the event. Everybody knows, but they never comment; if they do, nobody in official capacity puts them under the loop. Prosecutors and judges take orders as well. Worse still, prosecutors in Romania are de jure magistrates. To quote the Ancient Athenian lawmaker Solon, a good society is that in which the people obey the magistrates, and the magistrates obey the law. Romania is definitely a bad society in this regard.

Here’s a list with the most dangerous Gypsy clans in the country.

Such organized crime rings cannot function without the aid of state authorities. That means town councils, bailiffs, local police, the Department of Internal Affairs, corrupt prosecutors and corrupt judges, corrupt party leaders, corrupt members of the executive and legislative branches of Government, and the aid of dirty people (high and low) inside the Intelligence Services.

Almost half of Romania’s population is rural, and many people live in poverty. Ceausescu’s old industrial towns that he started out, but never finished, are now ghost towns. The few souls who live there have to endure a very primitive existence, dearth being the norm. Most Gypsies in Romania are poor. Social Services are incapable of handling the situation, just like they were during Ceausescu's reign. Children in Romania’s orphanages have to endure constant competition and abuse among themselves, from themselves, and from the staff as well. When a child becomes 18, they’re invited to leave. Social Services don’t care if they have a job or a place to live; they’re no longer bound legally to house them when they turn 18.

Yes, there are prejudices. Romania’s population holds many reactionary views and customs, but at the grassroots and higher, money opens all doors. In Romania, class (wealth) matters most. Everything else is noise. It’s not enough for the Gypsy clans to be rich, they have to display their wealth loudly, their “talent and coolness,” although other ethnicities engage in this obscene practice too. They take pride in others seeing their opulence. They are the nobles of feudal times.