The Groypers Emerge As the Far Right’s Enfant Terribles

Ben Shapiro and Charlie Kirk are too liberal for them. 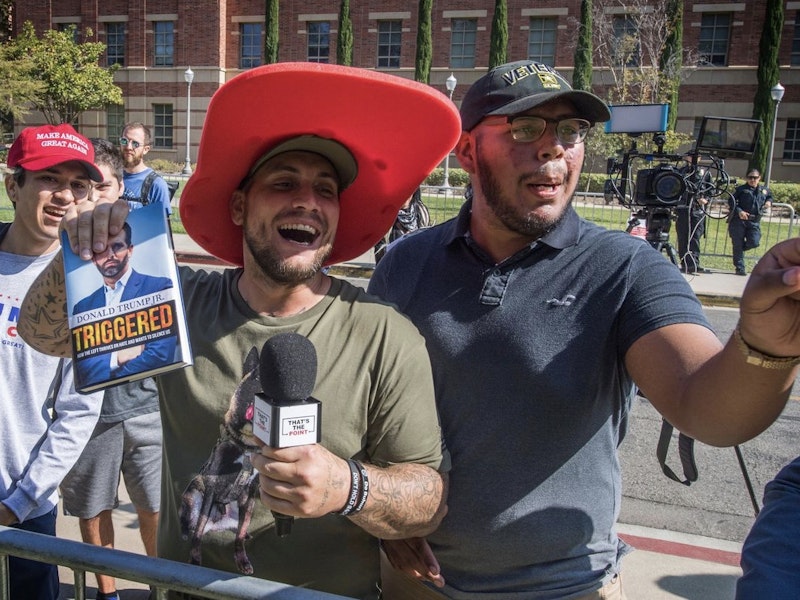 I initially assumed that angry students had heckled Donald Trump Jr. off the stage last week as he was promoting his new book at UCLA. I was wrong. Junior's big on "owning the libs." He surely showed up at the event armed with snappy comebacks aimed at collegiate "snowflakes," but ended up getting a bitter dose of what Republican politics of the future may look like, courtesy of an emerging right-wing political faction known as the "Groypers."

The Groypers (aka the Groyper Army) call themselves "America first nationalists," so you may wonder what sort of beef they have with a Trump. Their leader is Nicholas J. (“Nick”) Fuentes, an unwavering Trump supporter and Holocaust denier who marched with white nationalists in Charlottesville. His grudge isn’t against Don Jr., but rather with the book event's moderator, Charlie Kirk, founder of Turning Point USA, a conservative activist group focused on college campuses. Kirk's transgression was fearing alt-right contamination of his "respectable" organization and firing a woman for associating with the Groyper Army’s commander-in-chief, who runs a YouTube channel called “America First" which promotes views that aren’t respectable.

Fuentes and his Groypers are trying to fashion themselves as the uncompromising outsiders of the Right—rebels who refuse to sell out to the Republican establishment. As Trump rose to power on his outsider stance, it's a claim that could carry clout. Fuentes' problem with making it stick, however, is complicated by his anti-Semitic, anti-gay, and anti-immigrant rhetoric. When your views appear indistinguishable from Richard Spencer, a claim to being the wave of future conservatives is a hard sell.

The Groyper symbol is a version of the alt-right’s Pepe the Frog. As political guerillas, the Groyper Army stages stunts at conservative events, films them, and distributes the videos on the Internet to broadcast their power. Trump Jr. cancelled the Q&A session to prevent getting “Groyped,” which is what got him jeered off the stage. Groypers like to use Q&A sessions to ask embarrassing questions about such loaded issues as the changing demographics in the U.S. ("white genocide" is the term they use) and the Republican preoccupation with Israel—i.e. the Jews.

Nick Fuentes, a Boston University dropout, was once caught on a hidden microphone saying he's "not a fan of race mixing." He believes homosexuals and transsexuals are degenerates, and talks about the "mannerisms and customs of white people.” Fuentes, who uses the word "liberal" when discussing the ultra-conservative views of Ben Shapiro, is part Latino, although he considers himself white. But he won't call himself a white nationalist. Instead, he talks of the need for America to maintain its "European" dominance.

Fuentes' reticence in embracing certain poisonous labels associated with the alt-right gives the impression of a marketing-savvy messenger who wants to be allowed to nibble around the edges of respectable political discourse. If he's able to seed conservative culture with his extreme views now, perhaps the day will come when such coyness is no longer necessary. But debating whether or not the Groypers are a part of the alt-right is little more than an academic exercise. If Fuentes and his band of pranksters somehow found themselves in power, they'd shut the borders to non-whites and target Jews, gays, transsexuals, and other minorities. The alt-right would have little to complain about.

The Groypers, who brag about "wins" at Republican events they target, are capitalizing on the divide within pro-Trump conservatism that surfaced after the Charlottesville rally. Richard Spencer thought the naively designated "Unite the Right" protest would be the impetus for getting a seat at the political table, but instead it relegated him to irrelevance. Spencer now has to endure ridicule after a leaked audio reveals him spilling racial slurs in an apoplectic rage, while Fuentes burnishes his reputation as an authentic defender of “conservative values” from the paleoconservative point of view.

Fuentes believes the pro-Trump movement has been diluted by “fake conservatism” and deep state operatives. The Groypers disparage putting the economy ahead of their race-based vision of the American nation. They prefer the Pat Buchanan vision of this nation over that of Shapiro and Charlie Kirk, and rail against the degeneracy of those rejecting what they call their traditional Christian values. While some of his fellow extreme right-wingers have been censored on YouTube and other social media, Fuentes continues to gain followers. Twitter took Richard Spencer's blue check away, but Fuentes still has his.

The Groyper Army rejects the concept that this nation is based, above all, on ideas. To them, America is a "people" and a "land." That's what the Charlottesville protestors were referring to with their Nazi-derived chant, "Blood and soil!" In their world, the Jews are bankers and industrialists holding down those who, by their ethnicity alone, have a natural right to power.

The Groypers are a younger and fresher version of the alt-right that went into oblivion on the day after the Charlottesville rally ended, but they've just slapped a fresh coat of paint on the same old white nationalist ideas. Fuentes, a Catholic, wants you to believe that his politics are religion-based, but his differences with Spencer are mostly stylistic. They might have a heated debate over whether or not Donald Trump is awesome, but not over matters of substance.