In 2009-2010, the old Yankee Stadium underwent a long-drawn out demolition after its successor opened (by the contrast, the city tore down Shea Stadium mere months after the Mets moved out). 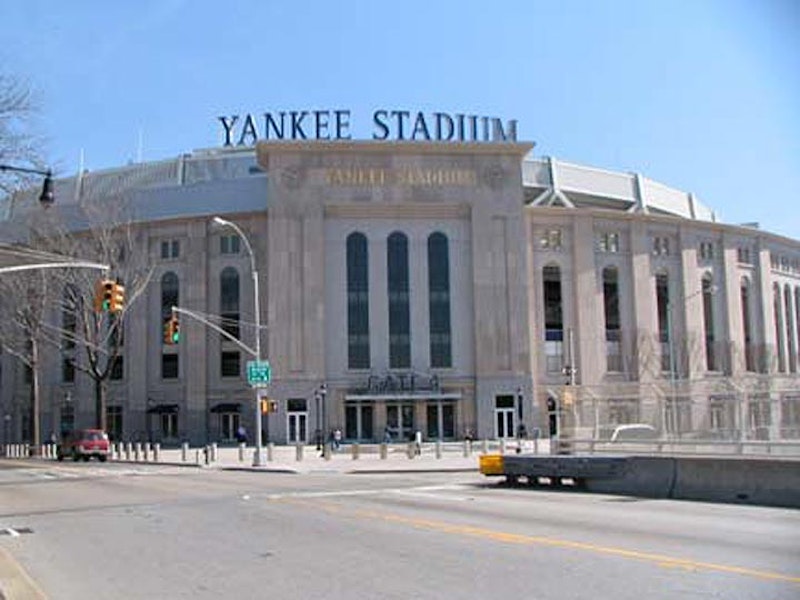 The western Bronx consists of a chain of high hills and valleys arrayed on the eastern banks of the Harlem River, heavily urbanized now, but formerly home to wealthy estates and thickly-wooded meadows. Highbridge Heights, today’s featured neighborhood (roughly bordered by the Harlem River, Jerome Ave., and the Cross-Bronx Expressway) was in large part once the Marcher estate. The lord and lady of the property maintained a formal garden dedicated to the works of Shakespeare and displayed busts of him and some of his best-known characters. The heavy hand of modernity eventually encroached, and the property was sold off. Only Shakespeare Ave. is a current reminder of the Marcher estate and its garden.

In 2009-2010, the old Yankee Stadium underwent a long-drawn out demolition after its new counterpart, above, opened. In March 2010, the last bits of the upper deck were demolished. By contrast, the city tore down Shea Stadium in months after the Mets moved out.

The Stadium was constructed throughout 1922 and opened in time for the 1923 season. Babe Ruth beat his former team, the Red Sox, with a home run on opening day of that year; the Yankees won win 26 World Series while playing in this building. The Bombers christened their new park with a World Series victory over the Phillies, but the championship well had dried up since, and the Yankees went a decade without a championship for the first time in a century.

Macomb’s Dam Park, between the bridge approach road and Jerome Ave. north of E. 161st, is named for the nearby Macomb’s Dam Bridge that connects Highbridge Heights with W. 155th St. in Washington Heights. The park itself opened in 1899 and, in the past, contained an Olympic-style track; three-time Finnish gold medalist Hannes Kohlesmainen trained here in preparation for the 1912 Olympics. 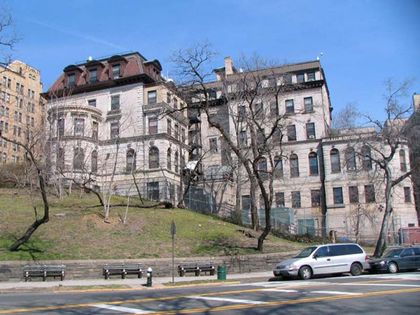 The most distinctive building in the shadow of the new Yankee Stadium and overlooking Macomb’s Dam Park is the 1901-1902 American Female Guardian Society and Home for the Friendless, and current Highbridge Woodycrest Center, 936 Woodycrest Ave. It was constructed to house abandoned and needy children by then-prominent architect William B. Tuthill in limestone, brick and terracotta. It now serves as a long-term health care facility. 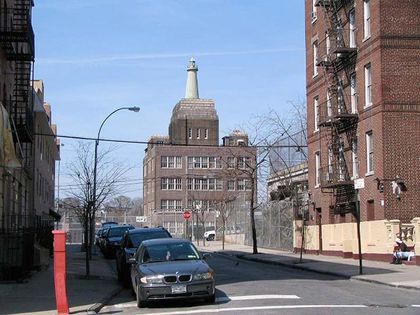 The H.W. Wilson Company, a bibliography, general interest, and periodical index publisher that’s been in business for over a century, has its headquarters on Sedgwick Ave. just north of its fork in the road with University Ave.. Its distinctive “lighthouse” was constructed in 1929. The lighthouse, shown positioned on a book, is meant to symbolize “guidance to those seeking their way through the maze of books and periodicals, without which they would be lost.” Seen here from Ogden Ave. and W. 162nd St. Now a division of Grey Publishing, its headquarters are no longer here, though the lighthouse still features in its logo. 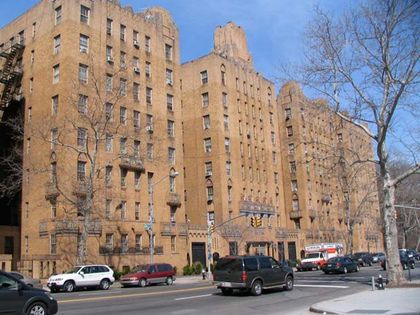 Park Plaza, 1005 Jerome Ave. opposite John Mullaly Park, may be the Bronx’ most famed apartment complex not located on the Grand Concourse. The massive Art Deco building was designed by architects Horace “Harry” Ginsbern (interiors) and Marvin Fine (exteriors) and constructed between 1929-1931, at about the apotheosis of Deco-ism, at least in the States. In the early-1930s, polychrome terra cotta was in vogue, and Park Plaza does it better than just about anywhere else. Ginsbern was known as “the genius of the Bronx” as he designed 137 apartment buildings in the borough. Designer Fine’s taste in gargoyling was eclectic—besides the standard-issue pondering long-eared beast, of the type seen on Notre Dame in Paris, there are also frogs and squirrels. Other terra cotta elements depict an architect presenting a model of his new building to the Parthenon for approval. 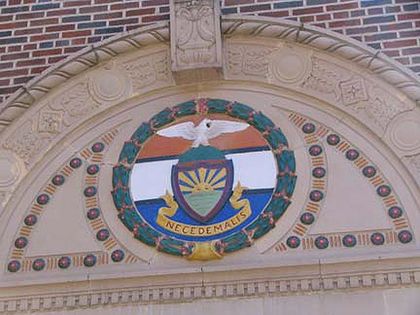 John Mullaly Park, which at present runs from E. 164th north to just past E. 166th between Jerome and River Aves., was truncated at its southern end to make way for the new Yankee Stadium. The park house has a colorful rendering of the Bronx flag.

The Bronx borough flag was adopted in 1912. It is described as the Dutch colonial flag (the Prinsenvlag of orange, white, and blue horizontal stripes), with the addition of the Bronck family arms encircled by a laurel wreath denoting honor and fame. The shield shows the face of the sun with rays displayed rising from the sea, signifying peace, liberty, and commerce. The crest is an eagle with its wings “displayed” on a hemisphere facing eastward, representing “the hope of the New World while not forgetting the Old.” The motto is the Latin phrase “Ne cede malis,” meaning “Yield not to evil.” 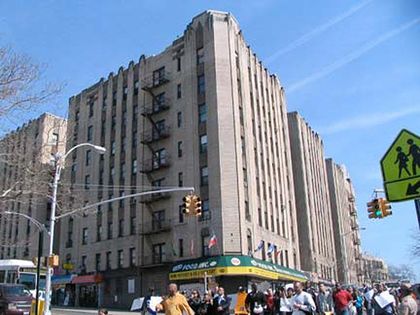 Noonan Plaza, W. 168th from Nelson west to Ogden, is another Horace Ginsbern creation second only to his Park Plaza in neighborhood apartment complexes. This group of buildings also echoes Mayan ornamentation, as did Park Plaza. When it was opened it was among the grandest residential residences in the borough.

According to Constance Rosenblum in Boulevard of Dreams, an examination of the Grand Concourse and the grand apartment houses found on it and on surrounding streets, the building was “so elegant that its doormen were attired in uniforms, adorned with small capes… Residents lucky enough to occupy apartments that overlooked the fifteen-thousand square foot interior garden were treated to a spectacular tableau; a waterfall splashing into a pool that was home to swans, goldfish, and water lilies… crisscrossed by a series of Japanese style bridges. Amenities inside included mothproof storage closets, Electrolux refrigerators, and an elevator roomy enough to accommodate wheelchairs for the elderly. Bathrooms featured built-in-tubs, colored tile walls, and hampers—all luxuries in their day.”

By 1975 the building sunk into disrepair as welfare families had moved in. Perhaps some equilibrium has been achieved since. 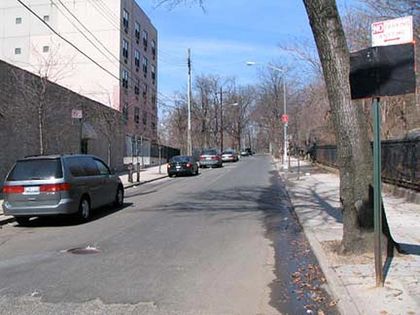 University Ave., which runs from Sedgwick Ave. near Macombs Dam Park all the way to Jerome Park Reservoir, has had three names at one time or another; it started as Lind Ave. in the 1860s, switched to University Ave. in 1917, in honor of the New York University campus it ran past (now occupied by Bronx Community College and containing the little-trafficked Hall of Fame). The street was further named for Martin Luther King, Jr. in November 1988.

Quiet and unassuming at W. 168th St., University Ave. gains several traffic lanes a few blocks north of here at Edward L. Grant Highway and the Washington Bridge approach; University Ave. is once again subdued in its final few blocks near the reservoir. 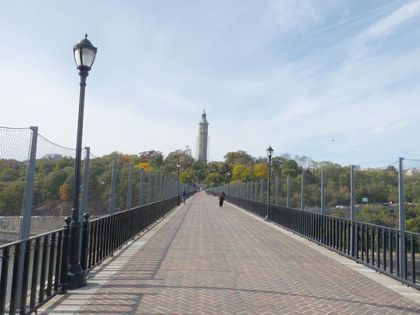 Between 1960 and 2015, it had been impossible to walk on High Bridge (the third bridge built to span the Harlem River (1845), following Kings Bridge (late-1600s) and the first Macomb’s Dam (1815). Hooligans throwing objects off the bridge prompted the City to close it. A high cyclone fence would’ve done the trick; a high fence was added during its refurbishment in the early-2010s that allows urban mavens to stick a camera lens through its openings to get photos up the Harlem River or down.