The Polarities We Live By

And their deeply political implications. 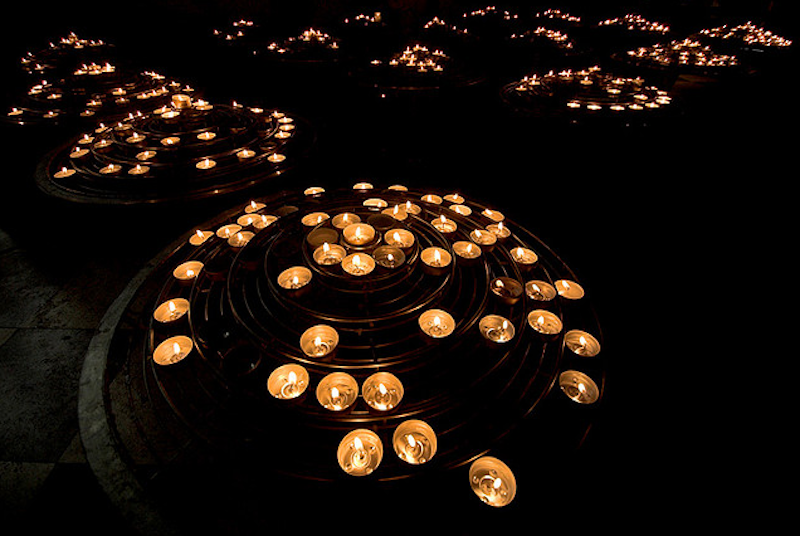 "The Struggle Between Good And Evil," "Light Vs. Darkness” and “The Battle Of The Sexes" are catch phrases of polarity. Ingrained in the collective American consciousness, they serve only to simplify the complex nature of modern life and result in dangerous consequences for effective democracy. Dominance of the polarity imperative has marginalized perspectives that exist on the fringes of American politics, but the obsession with polarity has made the once mainstream idea of compromise seem like a destructive deviant form of behavior. Some would argue that this extreme of "dark" and "light" is maintained through a great conspiracy perpetuated by those bureaucratic superpowers who control the world's strongest governments, most of which are defined by a system of two political parties. Regardless of whether or not such a conspiracy exists, I believe that the effect of those sketchy political moves would be cursory at best when compared to the way in which polarity's strength crushes the voice of independent American political movements via its influence on this country's prevalent cultural lynchpins of religion, courtship, and the legacy of America’s formerly immense agricultural economy.

The most intense example of polarity's influence on American politics is found in our country's connection to religion. This is illustrated by the words of “The Pledge Of Allegiance.” According to the Pledge, our country is "one nation under God, indivisible..." In that obsessive declaration of oneness, America is portrayed as right with all others potentially representing that which is wrong, a presumption which automatically creates the illusion that Christian America must be locked in some kind of conflict with the "wrong"/"pagan" non-American nations. It is not unreasonable then to think that independent political parties are a threat to the established order of good and evil indirectly referenced in “The Pledge,” as the current system is dominated by two parties who are often also identified as purely "right " or "wrong" by their most zealous/loud supporters and detractors.

Matrimony viewed through the prism of American morality further solidifies polarization as a righteous way to uphold "order" in society. From the tax breaks given to two-parent family units, to the administration of death benefits, to the content of pre-nuptial agreements, every aspect of the law that affects marriage and domestic partnership is tailor-made to promote traditional monogamy. As a standard bearer of emotional security, financial security, and accepted social behavior, the two-partner relationship's commonality then also casts a negative shadow on third party politics. The third party in this context subconsciously can represent a deviation from the dominant/submissive power dynamic that also often thrives in a monogamous romance. With a political system whose utility is based around the dominance or submission of only one or another party, the third party becomes subject to criticism for standing in the way of the two party system's progress (for example the opinion that, by simply existing, the political campaigns of Howard Dean and Ron Paul were sabotaging the success of those waged by their Democratic or Republican counterparts). Just as a plural romance receives disapproval for being anti-social and sexually perverse, the third party's role in American politics catches a similar kind of intensely negative scrutiny in being perceived as a needless bureaucratic perversion.

Prior to the Industrial Revolution, most Americans worked in agriculture. This industry gave birth to the ubiquitous eight-hour workday, a concept that emerged from the time when the agrarian lifestyle was defined by the credo “early to bed, early to rise.” Getting up early in the morning makes perfect sense if your day involves brutal hours of sweaty back-breaking work in a farm field. In the morning the weather is usually cooler and there's less sunlight, two factors which make physically demanding tasks much easier to complete. Needless to say, the agrarian way of life is far less prevalent now than it was in America's early days, yet legions of people in this country still wake at the crack of dawn every morning in subconscious response to the “early to bed, early to rise” mantra.

The two polar opposites of light and dark are represented here in full: productive activity is associated with light, while darkness is associated with rest and inaction, yet an average person working in the temperature-controlled environment of an office, a retail shop, or restaurant is never engaged in any kind of work directly affected by sunrise or sunset. This wholesale acceptance of the completely anachronistic, irrelevant, polarized concept of the eight-hour workday can then also be seen as another cultural factor that subconsciously influences not only the power of the two party political system, but also the blind acceptance of that system's tenants and traditions.

As American society becomes increasingly defined by ethnic and cultural diversity, it's only a matter of time until people realize that the dream of our country becoming "the great melting pot" is no longer fantasy, but instead an ever-expanding reality which is exemplified by the fact that the average 21st century American is a sophisticated individual privy to any number of cultural and political influences. Once this "new normal" receives wider acknowledgement, I believe that independent political voices will not only become louder, but dominant. Until then, the power of traditionally polarized cultural narratives will stifle American democracy's ability to reflect a greater ideological perspective.