Notes from a Series of Stock Photo Shoots

A carefree, United Colors of Benetton vibe is what I’m aiming for. 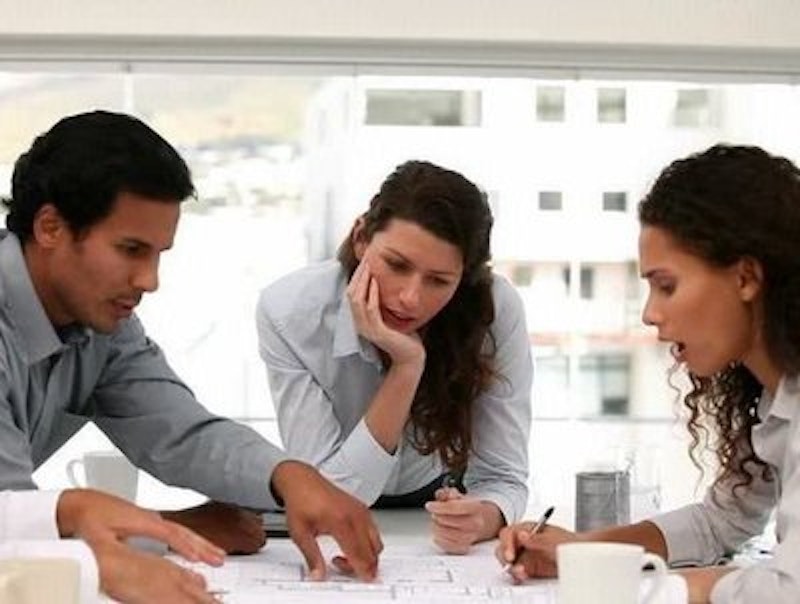 Valerie is seated in front of the monitor, while Brian is seated slightly to her right. Both lean forward, slightly, focused on the monitor. I watch them, take a wide shot and then a tighter one. Then I touch Brian on the shoulder, direct him to watch through the mounted camera. I settle into the seat, lean forward, and freeze, locked on that screen. Twenty minutes later I turn to Brian, elevating my eyebrows. I rise, replaced by a noticeably more pensive Brian.

Valerie is seated in front of the monitor, while Brian is seated slightly to her right. Both lean forward, slightly, focused on the monitor. I watch them. Then I touch Brian on the shoulder again, direct him to watch through the mounted camera. I settle into the seat, lean forward, and freeze, locked on that screen. Twenty minutes later I turn to Brian, elevating my eyebrows. I rise, replaced by a noticeably more bemused Brian.

Valerie is seated in front of the monitor, while Brian is seated slightly to her right. Both lean forward, slightly, focused on the monitor. I watch them, barely.

“What’s up, Neil? What am I doing wrong?” Brian asks, fumbling with his tie.

“Dude, you look constipated sitting there,” I moan. “You look like you ran out of prune juice last night and never bothered to buy more.”

“But there’s nothing authentic about your concentration, Brian. It’s phoned in. It’s as though you were walking down the street, a stranger, and Valerie rushed outside and dragged you in to look at something far beyond your grasp.”

“Maybe we need to put this into context,” Valerie offers. “Who is Brian tome? Is he the IT guy? A co-worker? A subordinate? Why is he at my desk, and what are we looking at? Some motivation might make the difference.”

I’m tense, coiled, pacing in the large, bright office space, willing myself not to swear or smash the Nikon. “Look, you’re professionals,” I finally spit, through clenched teeth. “You’re bright kids. Put your heads together. Figure it out. Come up with something convincing enough that when this photograph surfaces in a Risk Management webinar three years from now, students walk away more dazzled by notions of ‘mitigation’ and ‘acceptance’ than by how wooden and unconvincing the two of you looked peering into the soul of a Dell that wasn’t even fucking plugged in.”

Megan, Mike, and Jack wander down a hallway towards me, in an effortless imitation of a trio of well-appointed junior executives en route to lunch, oblivious to the dark glass surfaces that surround them. Five, 10, 20 shots, then we try out versions where a colleague, Abe, approaches them. The idea is that they’re all successful and know one another. Abe has a portfolio under one arm at first but I decide this is unlikely, so the folder is replaced with an expensive umbrella we ripped off from the tony bistro we stiffed earlier, at lunchtime.

Later, a studious Megan pretends to make notes on a legal pad in an empty conference room. A forthright Jane gestures towards generic sales figures on a large whiteboard. Dwight, perched over a broken laptop, regards me with an expression of “Oh shit, what now” distress, arms wide and fingers spread, verging on spirit fingers. I’m in a ridiculously wonderful mood until I realize that everybody in this labyrinthine, anonymous office complex actually believes that we’re employed here—as though I’m a data analyst and not squatting in the basement of a condemned tenement, as though these actors aren’t working for expired AMC Cinema gift cards.

The light is exactly where it should be for this time of day, and the kids are in decent spirits. Sachin has a thousand-watt smile and a knapsack slung over his left shoulder, and he’s watching me watch him through the viewfinder while actors his age mill around behind him on a shallow set of steps; they’re also grinning broadly. A carefree, United Colors of Benetton vibe is what I’m aiming for but I want total coverage, every angle, an unimpeachable variety of options, which is why we’ve been here for an hour and why I can sense everyone’s patience flagging. “Okay, take five,” I call. “You’re all doing great!” An assistant dispenses miniature cans of Coca-Cola to everyone. Today we are shooting on a recently shuttered state college campus, within shouting range of four or five other stock-photograph crews. So there’s a lot of polos, hormones, positivity. Marcel, another stock photographer whose crew is also on a break, bums a cigarette and we stand together awkwardly, not speaking, because there isn’t too much to say. A tattooed skateboarder in a Danzig tee wanders over, gobsmacked, hard-selling a compositional expertise he can’t prove, and wonders how to break into our business. Marcel is pretending not to hear while I’m noncommittally mumbling things like “Don’t do designer drugs” and “Stay in film school.”