Across the Bay Bridge. 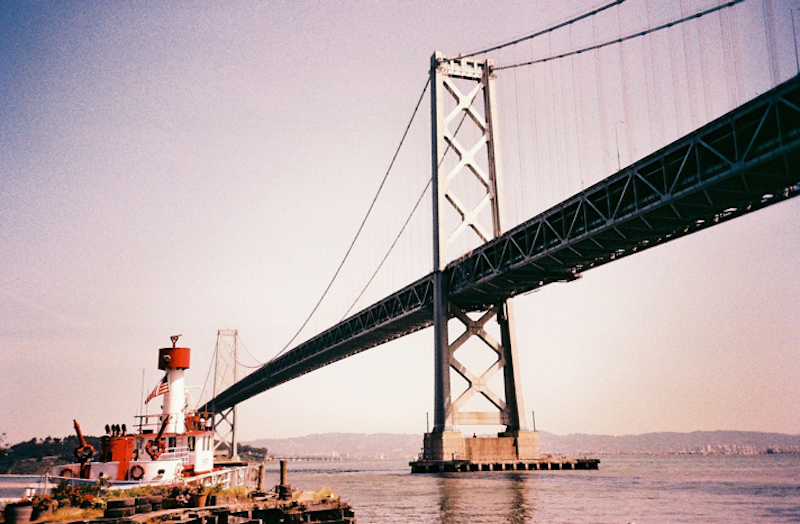 A car only becomes a car when stopping and going.
When moving 60-70 miles per hour
There is too much happening
To notice that you happen to be in a car.
Too busy thinking about the destination.
Too busy navigating the perils of the open road.
But this road is closed, or should I say, “sluggish,”
Because it is so heavily traveled every morning.
It is the road taking you to San Francisco,
Over the Bay, on a Bridge,
All of the people in all of the cars
Become familiarly strange in stop-and-go traffic.
Who is merging where, and how aggressive?
Who is cutting the line, just as they did in third grade?
The trucks are the big kids, the motorcycles the greasy kids.
The smart cars wear extra thick glasses.
What does my old Civic with its dents make me?
The kid without new sneakers when the new year starts.
But I remain more reflective than self-conscious as I drive.
Never having had the desire nor the opportunity to impress via vehicle.
I almost collided with another old Honda this morning,
But neither of us honked or suggested we go fuck ourselves
In gesture or otherwise.
We seamlessly entered the center lane,
Me from the right, him from the left.
Then I was ahead of him,
Stopping-and-going for quite a while.
He kept a distance behind me.
I don’t know if he was texting on his phone,
Or thinking about his child,
But there was a familiarity and an ease.
Though our cars had nearly touched,
There was no animosity.
The gentle merge… it’s rare.