Camping and the Art of Bullshit

Things my dad taught me. 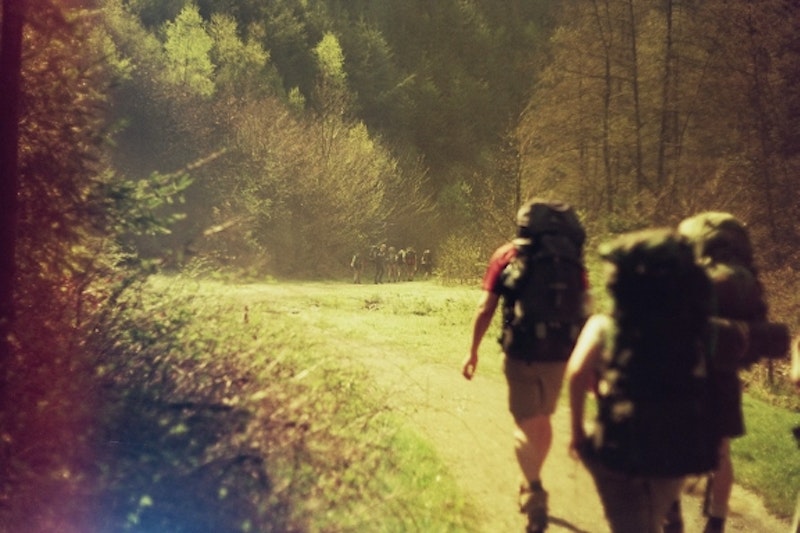 For someone born and raised in the Appalachian Mountains, I’m a pretty inexperienced camper. Unless it’s a pop-up, I don’t think I could set up a tent without watching a how-to video. I can start a fire but only with a lighter and a wad of newspaper for kindling. I enjoy hiking, but most of the hikes I’ve done have been day hikes—a few miles up and back, some scenic vista that I can take a book to; drive out by sunset so I can still hit the bar. I will say beer tastes better when you’ve been in the woods all day; like you earned it.

Back in high school, friends and I used to skip class during senior year to hike around Cunningham Falls, but back then you could park right on route 77 all of 50 ft. from the water so it was more like a nice stroll. All those friends though did their fair share of camping, and owned the requisite paraphernalia—backpacks, sleeping bags, pocket knives; the best I ever did was buy a used copy of Bill Bryson’s A Walk in the Woods and I never even finished it.

I haven’t actually been camping since I was a kid, when my dad would take me to Shenandoah National Park, usually with his friend John, who’s been hiking with him for more than forty years now. My dad still has old torn-up trail guides with more than a few trails that aren’t even listed online. There’s hundreds of trails over the 75 mile stretch of Shenandoah and my dad has done just about all of them.

After high school my dad enlisted and was sent to ranger training somewhere out west—they had him parachute into the woods and find his way back without radio help. He made it in record time, but was disqualified because he left his parachute behind. Apparently he was never sent to Vietnam because of some incident involving stolen explosives and a dumpster. Whether any of this is true I’ll probably never know. Kaufmann’s in general, and my dad in particular, are fond of bullshit as long as it makes for a good story.

I don’t remember much about those Shenandoah trips—I don’t even remember if they were fun, just that I was proud to be out in the woods with my dad. Anyone who missed out on that as a kid is definitely worse off for it. I know I can never hear Tom Petty’s Wildflowers without thinking of Shenandoah; my dad always had it playing in his old Isuzu truck (“the pup”) as we made our way up the Skyline Drive.

The last time we ever went camping I was probably 12 or 13. We were there with John and his son Adam, who’s maybe a year older than I am, and who I bonded with over an 8-mile hike that had us dragging until the last couple hundred feet, when we saw my dad’s truck and took off running for it. Late that night, as we all sat around the fire, John and my dad reminisced about high school—about kids who’d been teased, beaten up. Whatever happened to them… Then in middle school, I wasn’t exactly popular—I dressed awkwardly and didn’t play sports—but I wasn’t unpopular either. I was a goof, I got other kids to laugh but could still be relied on for homework help so I got a pass. Still I felt left out, as John and my dad talked. I made up a story about the fat kid who sat behind me in English class, who always had his books knocked off his desk, his locker kicked in. How one day he’d just had enough and punched Dylan Miss right in the face, in front of everyone. He was really bleeding. Like, a lot. And he was crying. And that kid, the principal didn’t even suspend him or anything.

Total bullshit, sure, but it was a good story.