The Future’s Running Out Again

Our fragile existence is held together by twine and spit. 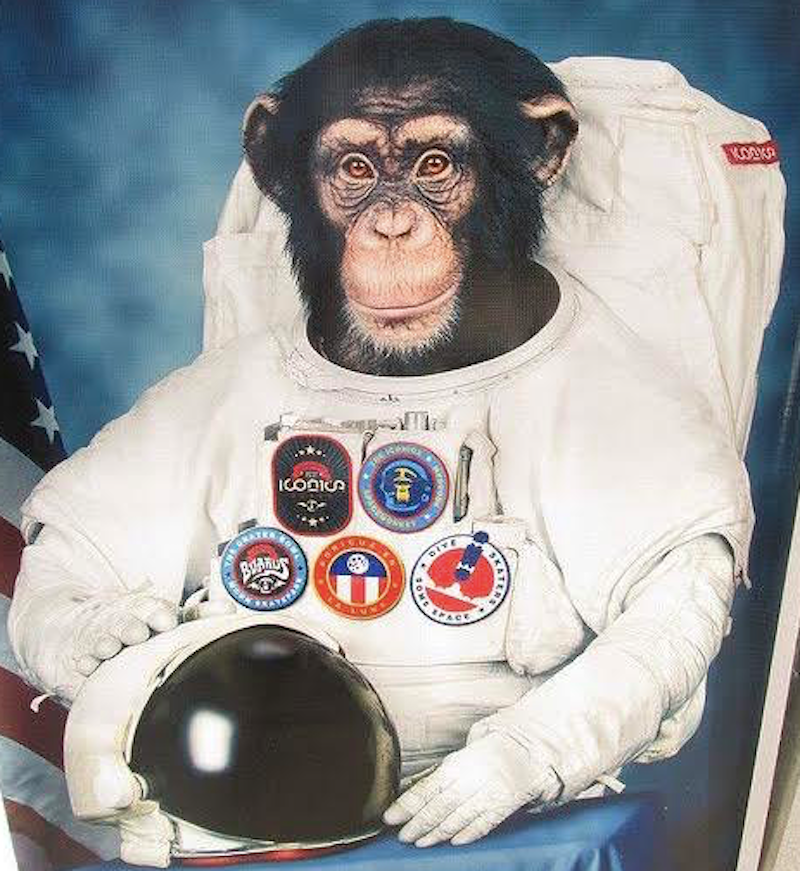 The Flintstones meet the Jetsons in my cartoon. I was laughing at the time, an empty face without a planet to lay my head anywhere in the cosmos—the pillow guys crack head fluffy. Light years ahead, traveling quicker than the fastest sound barrier’s boom. Under a starry blanket. Nuclear bombs of brass balls, gears, and guts sprung too tight, as intestines unravel, turning the long days into even longer nights as empty stomachs rumble.

To procreate and dream sleepy dreams of food on the rainy day tired of it all in a cold sweat testament to a sorry lot of fevered brows in humankind's simulated reality. Perhaps giant metallic monoliths pierce the sky. Phallic rockets fuck the stratosphere. Golden yellow arches hammer rare bloody hamburgers with a femur bone banging the primordial sunrise. Tools of rock and skeletal remains fashioned into crude weapons to kill prey or fight unknown adversaries. They look exactly like you or me, covered in greasy animal fat, and nobody makes monkeys out of us.

The first weapons of death and destruction were bare fists bashing, gnawing sharp fanged teeth tearing raw flesh. Until somebody picked up a rock, striking down your dinner before it eats you. And this was before the advent of sharp pointy sticks, spears, arrows, fire, or the wheel. They eat quivering flesh, throbbing hearts, livers, and brains while crunching bloody bones. These critters destroyed the world to prove their manhood. They bite the bullet. Every bullet has a name. Pistols and rifles and weapons of mass destruction, Spaceships with Hilton hotels and Howard Johnson restaurants. Galactic cruise ships in the ocean liner cosmos of a long buffet line. Zero gravity living on credit. Sneezing on the salad bar, a cryptocurrency fills the universal mausoleum. Money’s a dead virus. Floating in space is preferable to freefalling to earth with a dull thud. They explode in mid-air like cheesy fireworks rockets’ red glare. It gave proof through the night that the spangled banner rags were still there. No Indians, no Blacks, no Irish, no Chinks, no Japs, no Jews, no wetbacks, beaners, wops or dagos, spics or space aliens.

No ethnicity in outer space. Whites only, it's prehistoric prejudice. No Whites Allowed. Imagine how that plays out. Whites prohibited, created by the hand of an imaginary God in the image of man. Use the service entrance, invisible unoriginal non-entities of photo selfies. We've come so far out of the muck since crawling from the ooze. We were forgetting to take off our shoes, traipsing mud across your intergalactic floor. You’re talking about artificial intelligence that controls the plumbing of the world. Islands of plastic floating in a sea of space junk. Einstein's theory was proven wrong. And the dark matter that isn't there holds it all together. The universal super glue or a roll of duct tape and a screwdriver rule the world. Our fragile existence is held together by twine and spit. Used bubble gum under a desk circa 1963. The scotch tape and baling wire of a peaceful life. A delicate fragility of eggshell skin in a menagerie of glass hearts. That's what keeps us together.

The digital framework that makes up the DNA in our crazy banana splits. It’d be best if you weren’t from around here. This solar system ain't big enough for us. Are you living on some other planet? I’d ask you to take me to your leader, but I can see from the cut of your jib you're your own delusional boss. A chimp in an astronaut suit looks better than the average cave-dweller around these parts. Believe unbelievable beliefs in an extraordinary everyday life pervades throughout prehistoric times of the visible sights unseen. Unreal realities of spot-on facts concerning scientific truth are kept top secret. Nobody knows anything about anybody else. Ordinary nanoparticles in no particular order embody the nature of the beast in the body, a spiral staircase to the stars.

Influencers under the influence of aliens search for drunk extraterrestrials who are us traveling backward, stumbling forward. The future's running out again, and the moon was a missile firing range way back when. It was abandoned long ago before the end. After they ran out of ammo, they surrendered. The craters left over from target practice for the atomic fireball sun. The rays warm up our dead fish lifestyle, cold-blooded reptilians in an epic battle for the soul of humanity's lost ghost.

Battlefield Earth is in a death match with a grudge for star wars planet of the apes. The space force farce is forever losing the battle, the twilight limits of the outer zones' last war of the worlds. No great Freudian slip to Darwin's evolution of the species. Where Newton's theory was a quaint notion floating in zero gravity, our simian cousins ditched them long ago and swung on out of there.