And rules are made to be broken. 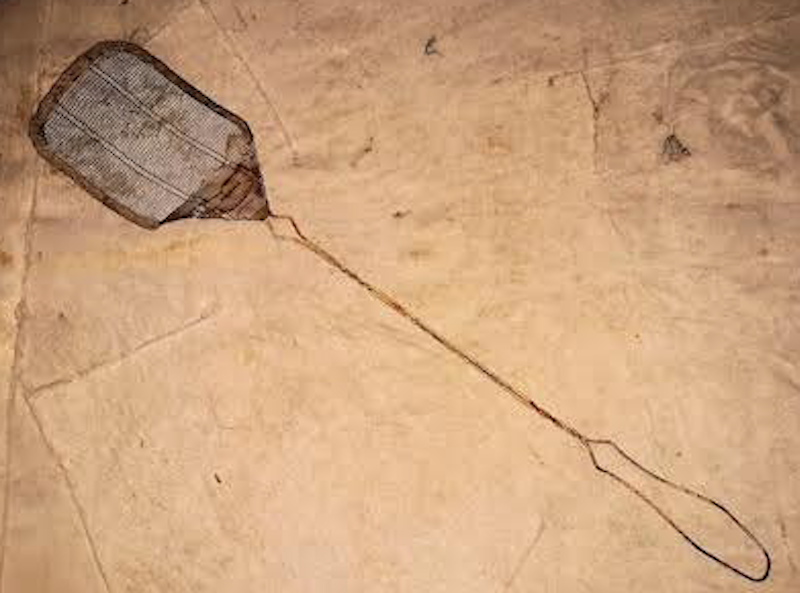 We were driving south, nearing the Louisiana border, when I first became aware of a car behind us, realized that a distant white Falcon had been in my rearview mirror for a while. How long? Yesterday? Hard to say. A white Falcon is almost invisible. I exited onto an interstate and lost them. That evening we pulled into a Howard Johnson's Motor Lodge. "Mr. and Mrs. Roger Cheshire" booked a room, in the back. We cleaned up and relaxed for a bit. On the bed, my arm was around Darla as she read a comic book. I watched Cronkite, choppers hovering a rice paddy. I hugged her to me, kissed the top of her head. She looked up with an adoring smile. Then we went to dinner.

We took a booth, in the back.

Our cheery waitress chirped, "And what will you and your daughter have?"

"My wife! Will have three shrimp cocktails! And two orders of French fries. And I shall have the Salisbury steak dinner. And we will have two Martinis."

"Um, yes, sorry. Yes, sir. Um." And she scurried off as fast as her fat little feet and varicose veined legs could carry her. On the other side of the room, at the counter, I noticed a dumpy gray man, about 40, in a gray suit. His presence bothered me. But why? He was just a gray man, one of a million gray men. Then Darla laughed, her laugh like chimes. She was reading a Jughead comic. She looked up at me, rolled the funny book into a tight cylinder, tapped the table edge with it, leaned forward. "Roger, do you love me? Do you really love me? As much as I love you?" She removed her glasses and bit the end of a stem. It just killed me when she did that. By the by, she doesn't need glasses at all, 20/20 vision. But they make her appear older, and brainy. Hence the prop.

"Darlingest dearest darling Darla, I love you as much as any man could possibly love a woman. My love for you dwarfs the mightiest mountain, is deeper than the deepest bluest sea, deeper, in fact, than the blue of your heavenly eyes, my sweet." I reached out and held her little hand. "My love for you shall never ever dim. In veritable truth, every single day it is twice as big as the day before, but not half as big as tomorrow." She scrunched her shoulders and shuddered. "That's what I like to hear! Yah!"

For desert Darla ordered a banana split. "Yah, with extra fudge sauce." And I a second Martini.

Exiting the restaurant, I held the door for milady. 'Twas night, pitch black. Poolside, I pulled a couple of chaise lounges together and we held hands in the quiet. The scent of the night was a mix of Deep South humidity and chlorine. Skeeters proved bothersome, so I said, "They hate smoke. Let's light up," reaching into my jacket pocket only to remember I'd smoked the last one back in the room. "Huh! Out. I'll get a fresh pack in the lobby."

The boy made change for a dollar and I dropped three dimes into the vending machine and pulled the lever for a pack of Tareyton, Darla's favorite. I was fine with Tareyton, but preferred L&M. As I scooped up the smokes, I noticed the gray man at the magazine rack, his back to me, leafing through a Newsweek.

I left the lobby, was hoofing it back to the pool when I noticed a white Falcon parked. I looked closely. A Hertz rental. Hertz, not Avis. First class. Same white Falcon I'd noticed earlier? I shrugged. Common enough of a vehicle. Fitting that Falcon used Peanuts in their ads. If Charlie Brown ever owns a car, a Falcon is a match. Make it a six-cylinder, three-speed, no whitewalls for Mister Loser. That comic strip is pretty funny, but there are times I'd love to punch Charlie Brown's face.

Back at the pool I ripped open the cellophane and tore back the foil, tapped the pack, offered a Tareyton to my love. I lit a match, cupped my hands and leaned toward her. Her cobalt eyes, illuminated by the tiny fire, glowed, like a cat's. We reclined and enjoyed a sweet aprés dinner smoke. We held hands and were silent, a good silence, the sort of silence that settles when the world seems to have taken a vacation from spinning and all is still. Quiet, except for an occasional car on the highway, its headlight beams approaching then receding. Darla said, “I love taillights disappearing into night. It's pretty.”

She hopped onto my lap, straddled me, palms against my shoulders, her shift hiked way up. She said, laughing, "Oh, does it hurt and have a tempa-tuh?" She put her forehead to mine and whispered, "Yah, let's go back to the room." She flung her cig behind her. I heard it hit the pool with a hiss and I kissed her, my Darla, my darling. I knew this was wrong, all wrong, so ineffably incorrect, yet so very right. Rules are made to be broken. Such an odd pair we. Me, the combat veteran who'd slaughtered Lord only knows how many. And she, as innocent as a lamb.

The next morning we were on the road, the top down on our little MG, wire wheels spinning up a storm, driving, diving deeper into the Southland. For nourishment, there was a thermos filled with gin, a few drops of vermouth, and a dash of olive oil in an ice bucket seated between us. Fueled thusly, we became ever more determined to tie the knot, make it all quasi-legal. And Lizzy-anna seemed to be the place where one could get away with it. In Lewisville, a fly speck of a hamlet, we found a justice of the peace, one Reverend Travis Wolcott. I don't know how legit his ministry was; he reeked of rye. But he asked no questions. Squinting, the rheumy-eyed reverend filled out a page of paperwork. His bony liver-spotted hand was shaky. Mrs. Wolcott was called from the backroom to serve as witness, with a smile, after shutting off Monty Hall's deal making. Seeing her I thought, "Jack Sprat ate no fat, his wife ate no lean."

The bright blushing bride wore a white skirt and a white blouse, held a small bouquet of forget-me-nots. Her posture was erect, expectant. Her eyes were never a deeper hue of blue. She wore a pair of pink Mary Janes and white socks, twisted her toe and bit her lower lip.

"I do, yah!" We kissed, sealed the deal, now legally Mr. and Mrs. Roger Cheshire. Legally if one overlooked the phony surname, and my currently running marriage to Mrs. Kane.

Let me tell you this, there is nothing in God's good world as pure or as glorious as the heart of a young girl on the threshold of womanhood.

An aside: consider the women in my life. Placid, somewhat younger. What's her name, my LA neighbor, about my age, as I recall. Audrey, long of tooth. (Her perfume couldn't quite suffocate the odor of old.) Now Darla. There’s no denying it, I like the ladies, the spectrum of ladydom. And leave us not forget Sheri. And a slew of others. Gals! Why would a fella ever choose the life of a pansy when our planet is crawling with gals? There are, on any given day, billions of females. And I'd guess a million of 'em are, to one degree, gorgeous. And lonely, dying to be appreciated.

Another aside: you could think me a degenerate for loving a woman so young. And you would be off target. What I love, adore, about Darla is, yes, endemic to youth: an innocence. But with that, also, comes the keen perceptive abilities of the noble savage. To wit: I can sneer at a comic book. Obviously, it’s a crude vulgar object designed to appeal to a feeble mind. Yet Darla can read a comic book and perceive layers of meaning invisible to my Ivy League thinking! She seethes with an unvarnished anger when Moose is cruel to Jughead. She weeps big tears when Archie and Betty have a falling out. In short, Darla has verve! (Funny little word, verve.) There was a premonition of Darla in the cathouses of Seoul, they of the plain brain and teacup breast and lust for life.

I love women! Even Placid's mom, Marjorie. Granted, a bit of a pill, a square. But I could tell she liked me. I'd give her a tumble.

A couple of weeks before the wedding of Roger and Darla, Placid clicked on the kitchen radio expecting to hear her hubby's voice. Instead it was a fill-in, some adenoidal kid playing a raucous rock ‘n’ roll number. She called the station, but the line was busy. The line stayed busy. Prentice citizens were furious that their routine had been toppled by barbaric drumbeats. Womp! Womp! Womp! I'm in pieces, bits and pieces!

In the days that followed, Placid's world, as well as Zeke and Marjorie's, cratered. What happened to Roger? Gone? Again? Where? Why? Zeke retreated to his study, sat at his desk, fidgeted a pencil, stared out the window. Marjorie glowered, assembled a plan, then ditched it and assembled a new plan. And, grinding molars, ditched that. Placid took to bed, under covers night and day, curtains drawn. Anne tormented Luke; torturing him became her favorite pastime, a hobby. "Let's play a game of human and fly. You be the fly."

"No!" He'd been sitting peacefully on the living room rug, dressed in shorts, playing with blocks.

Anne held up the flyswatter. "Yes. We'll see how hard I can hit you before you squish or fly away."

Smack! On a knee.

Smack! On a hand.

"Ow!" Luke began to whimper, got up and tried to run away.

Smack! On the back of his head. "Owww!" He fell on the hardwood hallway floor, skinning a knee, bawling as Anne rained blows to his head, his arms, his face. "Ow! Mommy! Ow! Mommy!"

"Mommy's in bed. She don't care. You're a crybaby! No one likes a crybaby!"

"Everyone hates you!" Smack! "They say you're a sissy-britches crybaby!"

Smack! Anne's ash-blonde pigtails swung, brazenly, as she beat her little brother, his wail rising to a shriek, filling the house, his pleas for mercy or help or something falling on deaf ears.