The Folly Of Valuing the Well-Meaning

It makes us soft-headed and lazy. 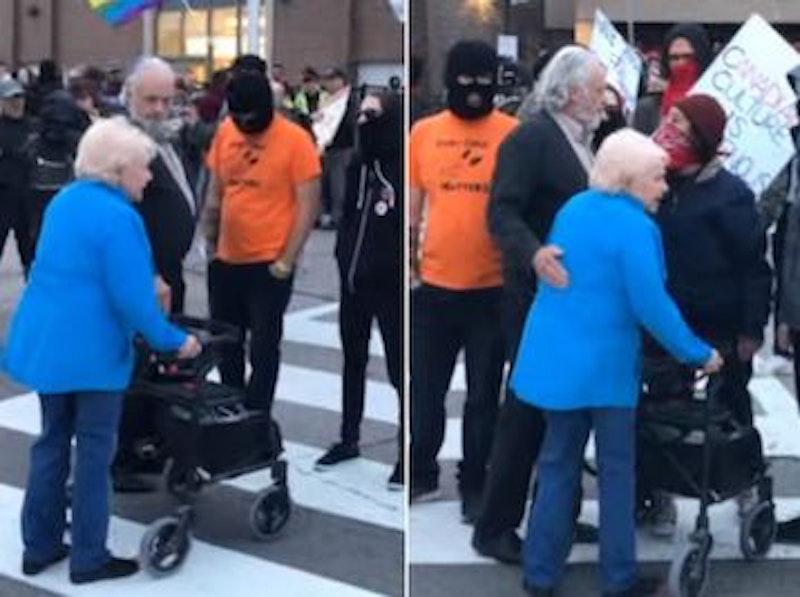 I was just looking at a video of some masked Antifa types harassing an elderly couple—one of them was using a walker—who were trying to attend an event that the "anti-fascists" wanted cancelled, and thought once again about how the MSM generally characterizes them as "well-meaning" (or "well-intentioned"), and how misused and misinterpreted that term is. People who try to physically intimidate people so old they can hardly walk aren't well-meaning—they're thugs.

This is a left-of-center problem. You won't turn on Fox News and hear someone lament failed conservative initiatives that were, at least, well-meaning, but you can go over to CNN and hear Don Lemon and Chris Cuomo make excuses for Antifa because they're "good guys fighting fascism." As Lemon put it, "No organization's perfect," a dispensation he'd never grant to an organization he disapproved of. Even worse, Lemon also said this: "It says it right in the name: Antifa. Anti-fascism." If only someone had asked him to explain why the Nazis chose to call themselves the National Socialist Party. If Lemon had only read T.S. Eliot he'd know that "Most of the evil in this world is done by people with good intentions."

Some will explain that this is all about conservatives not having any good intentions—that they just want to allow their beloved laissez-faire capitalism to impose its Darwinian cruelty on the population and let nature take its course. Then they'd have to explain why New York Times columnist Paul Sullivan wrote this, based on a study covered in an academic journal: "The more Republican a county is, the more its residents report charitable contributions.”

Beto O'Rourke and his wife are wealthy, and both come from wealthy families, but they gave only $1166 to charity in 2017—0.3 percent of their income. He says he does his giving through public service as an elected official, but that's a paid job, not a charity project. A garbage collector provides a valuable public service too—and works much harder than a Congressional representative—but would never claim that's why he doesn't donate to charity. He's not that arrogant or dishonest.

Public servant Mike Pence and his wife gave nine percent of their income to charity in 2015—30 times what the O'Rourkes donated in 2017, proportionately. Could it be that Beto and his fellow progressives are disingenuous about their good intentions? If I had to rely on one of two people's good intentions to survive, I'm taking Mike Pence's, because they're tangible.

The well-meaning Antifa screaming at the elderly couple were in Hamilton, Ontario, protesting a People's Party of Canada event. The PPC is "fascist" party because its views don't align exactly with Canada's current liberal immigration policies, although it's doubtful that more than two of the protesters, if any, have even read the party's platform. But that didn't stop the mob from violently attempting to shut the event down, so I'm not putting much stock in their good intentions. I'm not prepared to let people too cowardly to show their faces decide which groups may and may not hold a public meeting.

According to a study published last year in the Journal of Personality and Social Psychology (a peer-reviewed scientific journal published by the American Psychological Association), white people dumb themselves down when communicating with black people. Why would they do such a condescending, racist thing? Because they're well-meaning and they don't want a black person to struggle to understand what they're saying. The study found that if a white person thought they were writing a letter to a white person that they'd use words like “melancholy” or “euphoric” to describe a book, but if they thought they were writing to a black person, they'd tend to use “sad” or “happy."

That wasn't a study of Trump-supporting white supremacists. There were many good liberals in that study group who were displaying the bigotry of low expectations. These are the same people who call anyone criticizing the homophobia and misogny associated with Islam an "Islamophobe," as if Muslims must be held to a lower standard because the general wretchedness of their lives has rendered them too unlettered to do any better. Such "good intentions" rob Muslim women and LGBT people of much-needed allies, all in the name of not offending people who are overly sensitive to criticism, an attitude that's also condescending.

Well-meaning whites and blacks sit around and talk about white privilege because it makes them feel they're doing something positive when they're really just sitting around talking rather than taking action. People with good intentions push the concept of "microaggressions" on college campuses because they think they're protecting minorities. Saying that you don't see color is now considered a microaggression when coming from a white person's mouth, but how does teaching people of color that whites are being "aggressive" towards them with an anodyne, clumsy phrase that's lately fallen out of favor do anything but hamper their ability to function in a world where most people don't study up on speaking to them using only the latest approved nomenclature? Looking for aggression where it doesn't exist is the route to constant anger.

Let's stop letting people off the hook with the excuse that they're well-meaning when they're often just meddlers, because it's making us look as dumb as Don Lemon. Lemon's "well-meaning" too, a major contributor to the fact that he's such a poor excuse for a journalist.

If you try to fix a problem and do something stupid that makes it worse, you don't get a pass because because your heart's in the right place.