The False Horizons of Credentialism

We could avoid a lot of existential dread if we didn’t make the present a hostage of an ambiguous future. 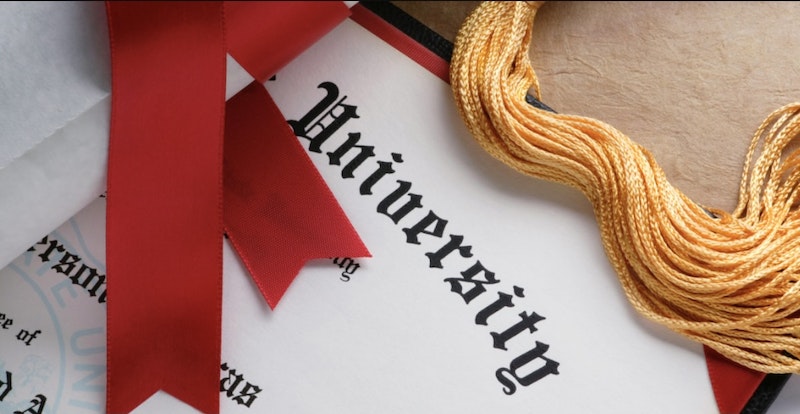 “Bro, you know high school never really ends, right?” Your acquaintance tells you this, like he's the first person to say it. While the metaphor has its limits, this Mensa-aspiring trailblazer has a point, doesn’t he?

Cliques never go away, they merely adopt new modes of expression. People often retain the social costumes from adolescence, updated through their behavior in adult settings. Perhaps the most salient example for our time is the college admissions process, consisting of SAT prep, essay writing, andthe curation of extracurricular activities. Before we can even drink, we’re tossed into the mines of reputational capital, sifting through the dirt of reality in search of “credentials.” But even after they get into their school of choice, many people stay in this preparation stage for life. It’s as if Junior year never ended,and we’re all still signing up for “volunteering” opportunities to better hone our personal story to gain entry into the racket of elite institutions.

When you look at the behavior of many young (and not-so-young) adults, the long years in the credential pits have left an epidemic of moral black lung (symptoms include pettiness, self-righteousness, and a glaring insecurity). So many people in their careers, their “activism,” their social media activity, and even their behavior in private reflect a desperate, paranoid, and delusional striving.

Talking about social justice movements, one friend told me he avoids radical and strident language — not because it’s so destructive to the cause — but because it goes against his “personal brand.” He used that term, unironically, in a private discussion with a friend. I wanted to say, “Dude, I’m not from HR, I’m your friend.” This anecdote sums up our era. It’s all about cultivating a reputation, a supply of status to cash in for more status. It’s about building your resume, with the goal of gaining more opportunities… to build your resume. You might land a job at a stable company that will sustain you for life, but why stop there? You don’t want to get “stale” do you?

It’d be like if the Israelites wandered through the desert for 40 years, came upon the Promised Land and said “Fuck it, let’s keep walking!”

You might have reservations about this or that social movement. Doesn’t matter. You’re one of the good people. Your standing among well-connected friends demands that you show up.

You may have an old friend on the verge of financial ruin. A little help could make a huge difference. But why bother? Help a friend from the old days? One who was always there for you? Oh, come on! Where’s the section on LinkedIn for that? The world needs your help. Do this reading. Share these hashtags. Donate to these NGOs. Change your profile picture. Vote for this person. Buy this product.

We all have to make some concessions to reality. You can’t just “do anything you set your mind to." There's a whole world of society, convention and other people. More often than not, you don’t necessarily do what makes you “happy.” Even if you’ve got a well-paying job following your passion, it probably won’t be your passion for much longer. Work-related financial stress has a way of turning any idealist into a jaded burnout. Rather, the best approach is to take something you’re really good at and find the most lucrative way to manifest it.

My Dad gave me some solid advice when I was in high school. “Listen, a lot of this stuff? It’s stupid! It’s bullshit! I know you want to rebel and do your own thing. I did too! But you gotta play the game a little bit.” In other words, if you want to gain some self-sufficiency, you need to play along with society just enough. When you’re with friends you trust or in the right setting, you can let your guard down and relax.

Good advice. But the key insight was that it’s a game. Do what you gotta do. But don’t make the game your life. Don’t take it too seriously. Don’t be that kid at camp who actually enjoyed singing the songs.

I got decent grades. I got solid SAT scores, with the help of a prep course. I could’ve taken the test again and received an even high score. But why bother? I got what I needed and never wanted to think about “analogies” ever again (or as the twentysomething dudes who taught the course called them: ANAL-ogies). I would have to go back to them when I took the GREs, before deciding that grad school was a waste of time and money.

I had a few activities I could use to polish my college applications: Boy Scouts, a couple of retail and clerical jobs, martial arts. But I never thought of them as “assets” in my “portfolio.” I did scouting because I had close friends there and enjoyed the camping and ski trips. I did martial arts because I wanted to learn self-defense. And I held down a job because I didn’t want to hit up my parents for money.

I remember a girl in my SAT prep class, frustrated and on the verge of tears: “I’ll never get a good score, I’m so stupid!” My teacher, one of the best mentors I ever had, calmed her saying,“No, you’re not stupid. This fucking test is stupid! You’re going to do great!”

You also see the power individuals have over your future. At one point in college, I took a philosophy course with a particularly difficult professor, who never seemed satisfied with anything. I’m lucky I passed the course, but other students (including philosophy majors) struggled so badly that it put their graduations at risk. This professor probably could do nothing else but teach philosophy. But he could put more productive futures in doubt.

It amazes me that some HR departments still care about GPAs, even for older applicants. If you’re evaluating someone in their 30s or 40s, and everything else looks good, do you really care about how diligent they were at age 20? Have you met most 20-year-olds? Plenty of people slack off then and shape up later on.

This isn’t a jeremiad against high achievers. It’s good to be busy, focused and productive. But I think we could avoid a lot of existential dread if we didn’t make the present a hostage of an ambiguous future.

You should play sports because you’re athletic, enjoy being part of a team, or get off on the thrill of competition. If you’re a student, apply yourself to subjects that line up with your natural strengths. Otherwise, as long as you’re passing and fulfilling your obligations, don’t freak out. When you die, no one will care if you had a 3.9 GPA. But others will remember if you were an insufferable, self-obsessed psychopath. Our system incentivizes this behavior, reflected in how many people cheat or lie their way to straight As, or parents who write term papers for their kids.

And just as excelling in high school often comes down to memorization and following directions, success in college (including grad school) often depends on playing the right interpersonal games with faculty and administrators. This doesn’t cultivate great minds. I’ve met a lot of smart and insightful people in the trades who never set foot on a university campus. I’ve also met some really dumb people with MBAs.

In a lot of cases, what did all of this “achievement” get people? All of that stress, crying, gossiping, cheating, shame and anxiety... to do what? Work 50 or 60 hours a week as a “Project Manager” creating PowerPoint decks, sitting in pointless meetings, and making pivot tables in Excel?