Some of Yesterday’s Parties

I’ll pass on Zoom this year. 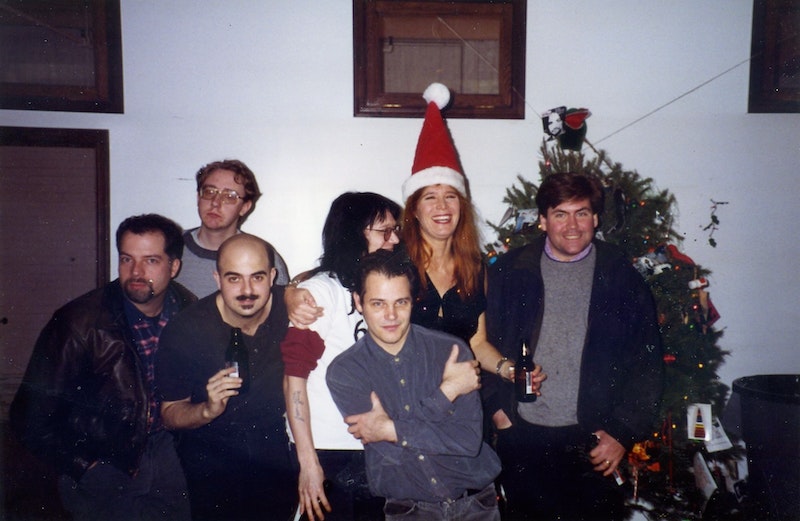 In the last week I’ve seen numerous headlines on top of stories about 2020 Christmas (or holiday) parties that companies are holding by Zoom. Talk about downers. I’ve never used Zoom: wouldn’t be prudent, wouldn’t want my office on display, just wouldn’t do it.

Thinking of the first President Bush—and who doesn’t nearly every day?—brings me back to the latter part of the last century when Christmas parties (before the silly “War on Christmas” that both the left and right gin up just for kicks) were an anticipated ritual, at least at the two weekly newspapers I ran. I’m sure there were some of the drunken mistletoe 10-minute liaisons at our offices (on a basement desk, the loading dock if it wasn’t too cold) that are stereotyped even more than fruitcake gifts, but that was vanilla insurance-firm mischief compared to other instances of bad behavior. The statute of limitations has run out—and unfortunately some of the participants are no longer alive—but my lips are still zipped on the really, really rude indiscretions. At least in print: my longtime friend Michael Gentile—living in Manhattan and whom I used to see several times a year pre-COVID—and I still chuckle about those fetes, most of which we both remember. I’ve got the eyes of Mr. Magoo but the memory of Jumbo.

Even when Baltimore’s City Paper was under water financially (in hock to the IRS, for example), my partner Alan Hirsch and I made sure to have a party each December, and as our fortunes improved, so did the raucous goings-on, as people from the ages of 15-70 spilled out of our rowhouse headquarters on N. Charles St. It was in 1985 that Alan came up with an Old Fezziwig idea for fulltime staff before the bash began. We gathered a Santa’s bag full of gifts from local merchants who advertised in the paper—ranging from a Milky Way candy bar to the grand prize of a string of pearls or Caribbean trip—and everyone picked a number out of a hat and collected their present. It was luck of the draw, nothing to do with who was naughty or nice, and was a big hit, aside from one or two wiseacre sales representatives who belted out, “Yeah, and that’s a trade account I have to service!” Hello? Job description, Joe, Sally or whatever the fuck your name was. Even Jumbo has memory limits.

I’ve mentioned this before, in pre-Zoom days, but it still cracks me up. In 1984, a breakout year for CP, the party was nuts. Guests included an expanded “friends of the paper” list that included a dozen or so politicians, John Waters, Vince Peranio, Pat Moran, Chuck Yeaton, Dolores Deluxe, Sgt. Rock, Bob Waldman (who helmed CP’s predecessor Port City News) Tommy DiVenti, Alton Joyner, Orioles pitcher Jim Palmer, reporters and columnists from The Baltimore Sun and News-American and a beat cop from the neighborhood.

At one point, Alan took me aside, and said, “Have you checked out the bathroom? Not only does it reek of pot [in fairness, joints weren’t confined to the john] but people are shooting up in there.” And he showed me a browned-out spoon, needles and misplaced dime packets of smack. “Should we do anything?” A legit question, considering that elected officials and a judge or two were drinking National Premiums here and there, but I said, “It’s the most wonderful time of year, so let’s ride it out.”

At New York Press, Advertising Director Michael Cohen (who joined me there after City Paper was sold), continued the pre-party bonanza (or dud, depending on the recipient’s number) and it was even more extravagant, although among the jewelry, gift certificates and deluxe fruit or cured meat baskets were sprinkled decks of cards or a throwaway promotional record or book that our critics tossed in the discard heap. And we did rig it once or twice, making sure an entry-level employee came away with the gold.

But that lasted just two years: one, the novelty had worn off and it was a pain in the ass collecting all the items; two, the parties had become too unruly and loud to conduct a closed-door session. We always had a Christmas tree, a small one purchased on Mulberry St. behind our Puck Building offices, and after a standard dressing of the tree with cheap ornaments and a few on loan from my collection, employees added their own decorations, hence the photo of Charles Manson in the picture above. (I’m guessing that was the handiwork of John Baxter, the longest-tenured New York Press employee, and one of the finest men I had the pleasure of meeting during my print newspaper career. He started in 1989, this tall hayseed—I jest—from Iowa and remained until well after I sold that paper in 2002.)

It was a little weird in the days leading up to Christmas when clients would meet the receptionist and take a glance at the tree, which might’ve been Charlie Brown in size but not style, with all sorts of mischievous additions—syringes, photos of dictators and other men and women of disrepute—and that gave me pause. For about a second. The parties started at about one p.m. and lasted till six or so, and those who remained standing continued on at Puffy’s, Milano’s or Riverrun. The parties were frantic, and by 1996 I didn’t know a quarter of the guests (or crashers). But I was tickled when a freelancer told me, “This is best, man, at the Voice Christmas party it’s a cash bar!”

Not everything was a smooth Windjammer sail. In 1989, around 11 in the morning, I was walking to the office from my Tribeca home, carrying a box of ornaments, and, typically, wasn’t paying attention. I took a spill on Lispenard St.—can’t blame the weather, not a patch of ice in sight—and landed on my right knee. I recovered my glasses, and traipsed on, not thinking twice about the mishap. Later in the afternoon, full of cheer and Rolling Rocks, I was no worse for wear, enmeshed in conversation with the likes of J.D. King, Ben Katchor, Don Gilbert, pub friends Hunter and Chris, and Phyllis Orrick, among others. It was only later that night, after takeout Thai and a VHS movie rental from a long-out-of-business shop on Greenwich St. that I found, after re-reading Brecht’s Mother Courage, that I couldn’t get to sleep.

My knee was swollen to the size of a durian, hurt like a motherfucker, and so at six a.m. I took a cab up to St. Vincent’s ER, where, after several hours, I was given a prescription for some very unsatisfactory pain pills. Later that afternoon, I hobbled down to Puffy’s to meet a few friends, where my plight was met with a cursory, “Huh, well that’s a drag.” It was! Especially since I was scheduled for a flight to Bermuda the next morning for Christmas with my brother Gary, sister-in-law Teresa and young nephew Quinn. It turned out be a splendid Christmas day—at least inside; the island was rocked by gale-force winds outside—and I chucked the bottle of useless painkillers.