In Hawaii, Christmas Is for the Dogs 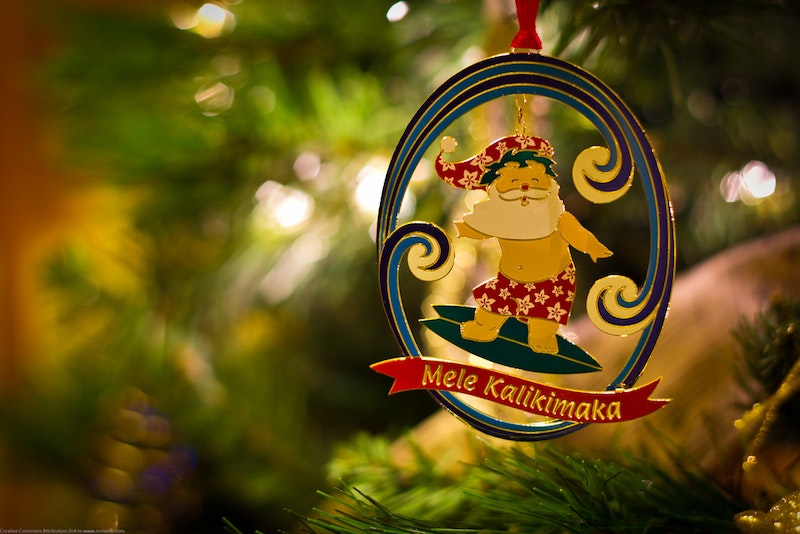 “Mele Kalikimaka!” began the priest at St. Augustine by the Sea Sunday. The standing room only crowd was not enthusiastic enough for him. He gave us one more chance to punch it, which we did. “MELE KALIKIMAKA, FATHER!” said kama’aina and newcomer alike.

I’d been away from home for Christmas before, but never in paradise. This year, while most of the folks on the mainland were freezing, I flew with my wife and a few in-laws—her Dad, sister, and Aunt Greta—to beautiful Oahu for three weeks. While friends and relatives in America and Canada were digging their cars out and turning the heat up, we were dodging Japanese tourists, drinking to stay hydrated, and trying not to get sunburned.

Christmas is a big deal in Honolulu. Strings of lights are everywhere. Stores don’t skimp on decorations. A fountain in front of city hall features a giant Santa and other statues that have to be placed there by crane. The interior of the building, with Christmas displays by all of the government departments, looks like a Yuletide tsunami flooded the place and ground normal business to a halt.

As the priest acknowledged in his homily pitched at C&E Christians and earnest seekers, it’s a lightly syncretistic sort of Christmas that Hawaiians celebrate. He talked of how people crowd his church, whose interior architecture is meant to evoke hands steeped in prayer, because they are looking for God by whatever name they call him. The birthday of one of those names simply strikes more people than usual as a good time to show up.

Years ago, I might’ve objected to that analysis. On Sunday, I thought it plausible but didn’t think too hard about it. Forgive me Father, for I was distracted. We came just a few minutes late and had to stand in the back the whole time, behind a disabled man with a big white seeing-eye dog named Merry Christmas. It’s a good thing the opening greeting was in Hawaiian. Otherwise, man’s best friend might have made a joyful noise unto the Lord.