The Elf of Yeats Country 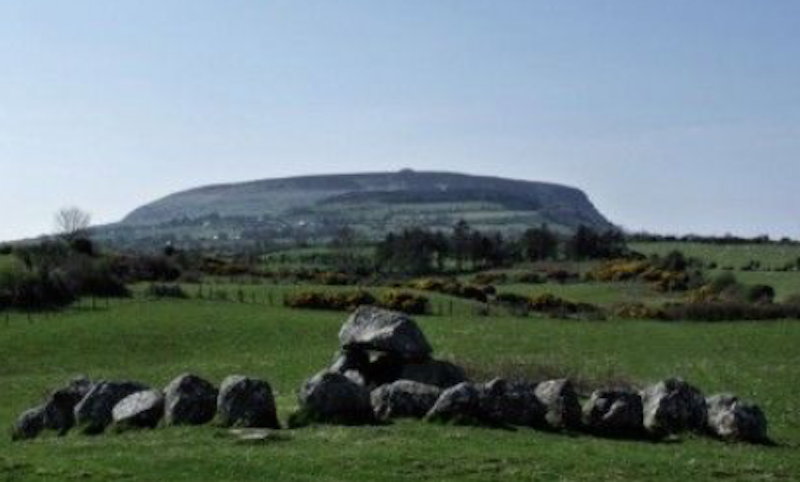 A few years ago I visited Ireland, the land of my ancestors. Having heard all the tales about “The Land of Scholars and Saints” from my grandparents, I thought I knew the country. What they didn’t prepare me for was a meeting was a mystical elf who knew about Yeats, giants, Queens, and fairies.

I flew into Ireland’s West Coast Shannon Airport. The Aer Lingus plane broke through the early morning fog on a spring morning and I gasped seeing how green the countryside was. Half asleep I went through customs, and my passport was stamped by the politest civil servant I’d ever encountered. He took me to my car rental and soon I was struggling with no sleep, driving a stick shift, and driving a car on the wrong side of the road.

I headed north and wound up in Galway. A quaint town that had a good Bed and Breakfast and wonderful pubs. The next day I drove up to Sligo. I was by myself so I picked up hitchhikers, usually farmers coming home from the fields. They’d politely thank me but kept the conversation to a minimum. I hit the town of Sligo and rented a room in a clean B&B.

I’d always wanted to see Sligo, I guess because it’s Yeats country and also, I liked the name. It slid off your tongue. I rested a while and around six ate at the B&B. I was served a delicious dinner of shepherd’s pie. After dinner I took a walk around the town and wound up on Abbey St. I saw an old abbey with a wrought iron gate around it. It was a relic from another time. I walked in and around the open stone walls. It was twilight now and the shadows from the walls grew long and dark. No one was around so I started poking around.

I jumped when I heard this. I turned around and saw a little old man with a knit sweater and a head full of white hair. His blue eyes twinkled and he gave me a big smile.

“Ah, you’re a Yank from New York. Do you feel the spirits in the abbey?”

“No. What Spirits?” I replied.

The man clapped his hands. “I’m the caretaker here. The abbey is quite a place. It’s been burned down three times by the Brits when they sacked the town. Once they killed all the monks here. At night if you listen you can still hear them chanting.”

We introduced ourselves but I didn’t catch the old man’s name. He repeated it and again and I still didn’t catch it. I grew up in a house full of Irish accents and have no trouble following them but it seemed to me that the old guy was purposely mumbling his name. I wasn’t going to ask again so I decided to just call him sir.

The old guy went on to tell me about the charms of Sligo. He asked if tomorrow I’d like a tour. Sure, I said. “Well, then, lad, you’re on. Come by me house at 11. I’ll be there. Now if you’ll excuse me I’d like to say a prayer with me Dominican friends.”

He walked into the shadows mumbling. I left and walked the streets of Sligo. I got near a small bridge by my B&B and watched the Garavogue River flow by till it got dark. The next morning after a delicious meal of eggs, bacon, fresh bread, blood pudding, tea and two copies of local Sligo papers I got up to leave. I asked the man who ran the B&B about the caretaker of the abbey.

“Tom, I believe it is.” I went to Tom’s house at 11. He was already outside. With a quick step he grabbed open the car door and said, “Come on, we’ll go up to Lough Gill.” He directed me up Mail Coach Rd. and we made a left on Cleever Rd. The sun was brilliant. The woods on both sides of the road were quiet and there were no other drivers on the road.

“Your man will be coming down. This road is winding. Be careful” I looked at Tom and almost said, “What are you talking about. There are no cars around.” But I didn’t. I figured the old guy was talking about the monks. A few seconds later a small car came whipping by us down the hill. “How the hell did you know that car was coming?” I asked.

Tom gave me a big smile, “I know things.“ We pulled over on an overlook and got out to look down on Lough Gill. The lake was vast and the wind started to hit the water making it choppy. “There is spirits in that lough, boyo. Ever year she claims a few fishermen. Don’t go in it. Just look at it.” Tom sat on a rock and told me how Yeats probably sat right here and wrote his poetry about Sligo. And in a deep voice he started quoting Yeats. He pointed out two mountains. “Ah, this is a fine country. Those are Knocknarea and Benbulben Mountains. Majestic. On top of Knocknarea is a cairn. You know what a cairn is?”

“I guess it’s a gathering of stones.”

“Right, Yank, and underneath that cairn on the mountain lays buried fair Queen Maeve, the high Queen of all of Ireland. I won’t take you there, but you’re free to go. Just go in the daylight. Don’t venture on mountains in the dark.”

“Why, the spirits?’ I asked. Tom laughed, “Well, maybe, but you don’t strike me as a woodsman. A mountain in the dark is no place for city folk. You can get lost or hurt tripping over rocks. Course you want me to make up a tale about fairies I will. I’ve never seen them there but just because I don’t believe in fairies doesn’t mean they don’t exist. The fairies probably don’t believe in me.”

Tom went on to tell me that two miles from the mountains was an ancient burial sight that pre-dates the pyramids. He described how to get there and look for a series of circular stones with two stones standing straight up and a slab across the top.

“They’ll say they don’t know who’s buried there but I know who lies under that ground.” Tom took an apple from his pocket and bit into it.

We get back into the car and drove to the Holy Well, an outdoor altar where Catholics came to have mass when the Brits allowed it. A metal stand held rows of candles and Tom stared at them. “I’m going back into the car. Light a candle for me. A man like me needs a candle lit once in awhile and while you’re at it, Yank, say a prayer for us.”

I smiled, lit a few candles, and said a prayer for Tom.