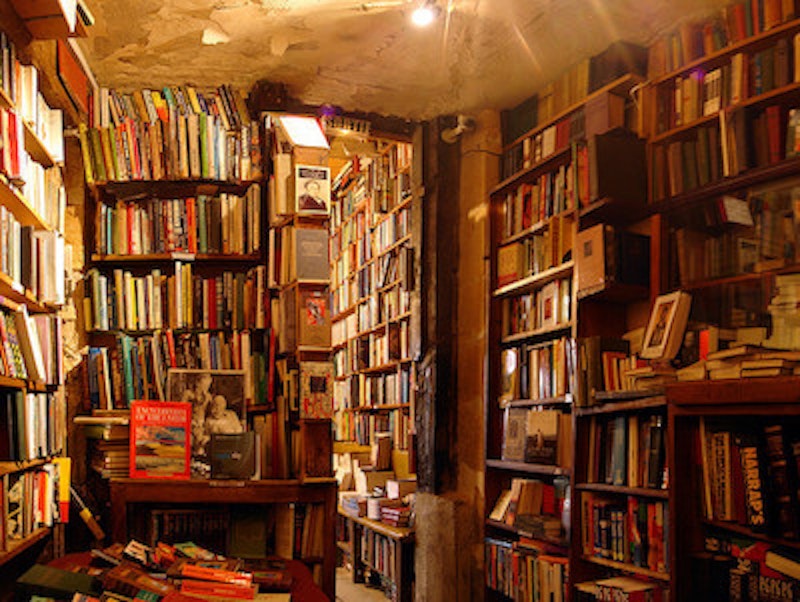 Suggestions for books I can add to the reading list I’m preparing for Daughter in advance of her sojourn in Paris this summer continue to trickle in.

A cynical acquaintance suggests that I include work by Michel Houellebecq. His thinking is that Houellebecq, that chronicler of a decadent Europe’s cultural and spiritual suicide, will cut through the romantic fog that surrounds Paris and show the place in its dystopian reality—as a city overwhelmed by Muslim fanatics and their bobo Macronite enablers, the latter awash in colonial guilt, self-hatred, and sexual anomie.

Yet another wag advises me to include the manifesto of the “yellow vests,” if there is such a thing.

Touché, mes amis, and the Lord knows that I share your concerns about French decline. But for the moment I seek to indulge myself and Daughter in precisely that “romantic fog,” even if I know better. Daughter will learn the dark side of French life soon enough.

So I’m more inclined to listen to the friend who suggests that I put on the list The Flaneur: A Stroll Through the Paradoxes of Paris, by the noted homosexual man of letters Edmund White. This friend also suggests excerpts from an earlier work about the Parisian flaneur: The Arcades Project, by the German-Jewish-Marxist philosopher Walter Benjamin. I think I’ll put White on the list, but not Benjamin. Having bumped heads with the latter in college, I think he might represent a little too much “heavy going” for Daughter’s airplane reading on the flight to Paris-Orly.

Another correspondent, bouncing off my inclusion of A.J. Liebling’s food writings on the list, suggests Hungry for Paris: The Ultimate Guide to the City’s 102 Best Restaurants by a certain Alexander Lobrano. But I’d rather not include guidebooks on my list, even if I do hope that Daughter indulges in the gastronomic treasures of the city to the extent that her modest means will allow.

My bibliophilic duties continue. O what delight for this Hoosier “bookworm”!

Much talk of the threat of socialism buzzes around the intellectual right. The rising Sanders campaign and the incipient career of “AOC,” as the young woman is known, are the drivers of this frenzy. “It Can Happen Here,” intones an alarmist headline in The American Conservative, which hasn’t been the same, by the way, since it parted ways with the wonderful Taki, that aristocratic Greek bon vivant and one of the few men with whom I wouldn’t mind “crossing streams” in a Gstaad Bahnhof toilet.

The question is what “It” means in this context. Many of my fellow traditionalist conservatives assume that it means totalitarianism of the sort that reigned in East Germany. But to assume that is to make the extrapolative error. There’s no reason why our future need look like any version of the past. History is a slippery and protean thing; it takes an infinite variety of shapes; the future can crystallize into any number of complex forms, almost all of which will be new and strange to us, and unpredicted by the soothsayers of Twitter and the blogosphere.

If we’re to get socialism, it might be a “socialism” that’s to our taste. This will be not only a regime in which the power of the global neoliberal perverts has been smashed, but also one that might, in fact, be permeated with resurgent Christian principles. A traditionalist heartland “front porch” socialism, that is, hearkening back to the heyday, a century ago, of a communitarian “muscular Christianity,” and with no admixture of the campus-left-style politics that seem regnant today—but that I think are on their way out, an epiphenomenon of a neo-liberal dispensation that’s swiftly being routed into the cesspool of history.

Another reason for optimism these days are the increasing ideological ties that are binding some of us on the traditionalist right to open-minded left-wing thinkers. We have beliefs in common. For example, a belief in the moral necessity of Great Russian imperialism, and a belief in the moral monstrosity of former Soviet republics that seek to free themselves from that righteous imperialism.

These beliefs should provide a basis for ideological partnership on other issues, about which I’ll write soon.