The Comfort in Being Sad

Spencer Madsen’s You Can Make Anything Sad is bleak and hysterically funny. 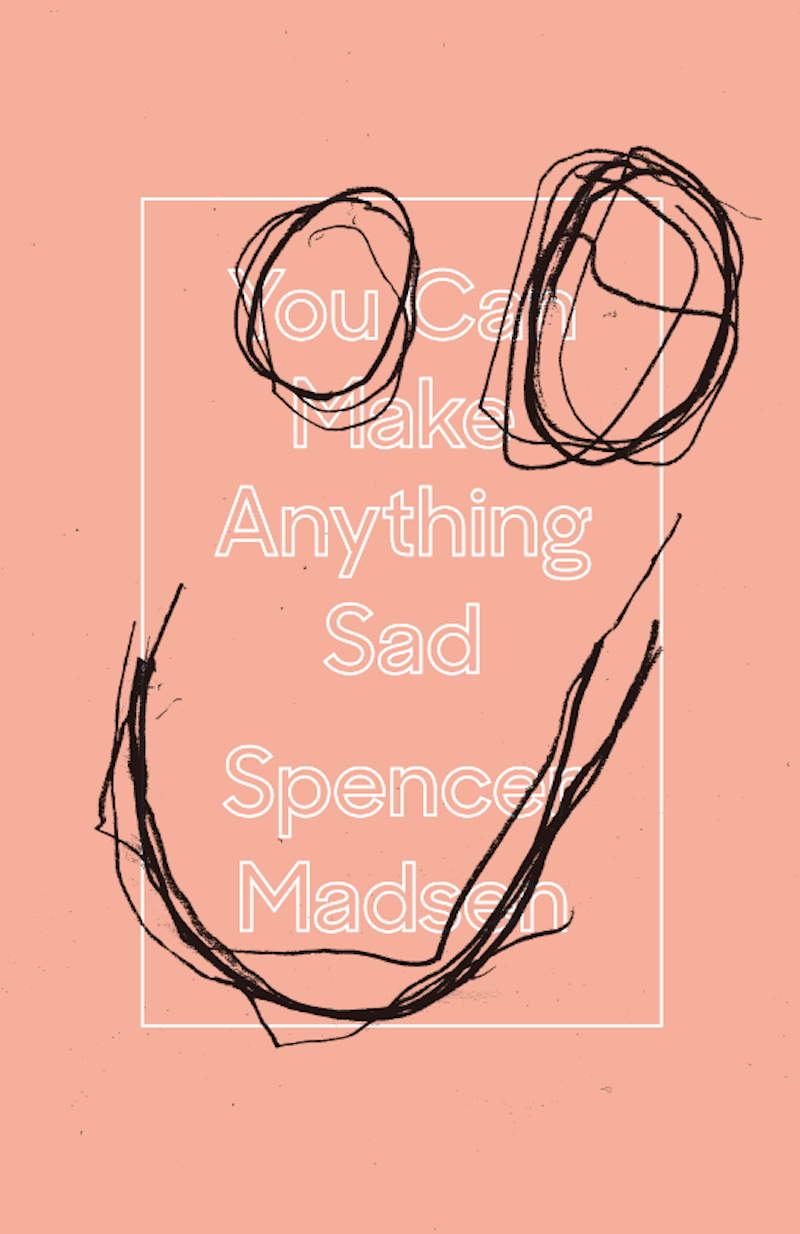 Spencer Madsen’s second book of poetry You Can Make Anything Sad could’ve been called I Hate Myself and Want to Die, but Madsen’s world-weary longing for connection and understanding is far from suicidal. Towards the end, he laments people that “could go on for weeks listing things [they] like,” wishing he could maintain or develop a serious interest or passion for anything. “It’s a different way of seeing the world,” he writes, “It’s the kind of company that changes the tint of things. A replacement of lens. You want to keep seeing the world their way so you keep seeing them.” This longing and despair wafts throughout You Can Make Anything Sad, and while the author’s alienation is ever-present and suffocating, he reserves most of the blame for himself and his state of being instead of the world or the people around him, acknowledging that “Most people have more efficient ways of dealing with their emotions than writing books.”

Madsen warns the reader with his very first sentence: “Watch as I impose on you new forms of useless emotions you didn’t know existed.” You Can Make Anything Sad is a collection of poems, ideas, journal entries, thoughts, and recommendations spanning roughly six months, from the fall of 2012 to late winter of 2013. There’s a list of titles for possible self-help books, and most of You Can Make Anything Sad reads like a self-help book, with lines like “Almost every human action can be explained by insecurity” and “Assuming everyone has been mistreated at various points in their life.” The author stresses empathy, humility, and understanding as much as his existential discomfort, wishing for “Brains being brains rather than the parents of bodies.” He writhes in his own skin (“Would read a self-help book called How to react when someone grinds on you”), despising the fact that he can’t enjoy what others find so satisfying in nature, for example, visiting the Swiss Alps, “and all the while felt hostile, like I’m missing something beautiful, like there’s a color to nature I’m blind to or a language embedded that I can’t speak.”

So Madsen is fully aware and very conscious that the territory he’s in is well-worn and potentially tacky, poking fun at himself more than anything else (another idea: “an indie rock band called Sad and Male”). He’s far more self-deprecating and apologetic than bitter and hostile, wishing most for transcendence rather than death or destruction. Instead of wallowing in self-loathing, he recognizes the absurdity of his impulses and emotions with lines like “I want to be the reason why you feel bad/Then I get to feel bad about it.”  We see his connection with a girl named Keila crumble, as he describes the fundamental rub about intimacy: “The illusion of relationships is the lessening of distance but a new distance arises when a stranger becomes a friend. Now suddenly palpable is how little can be shared between two individuals.”

You Can Make Anything Sad is not simply a volley of depression and disgust: it’s happy, sad, wistful, inexplicably remorseful (“How to stop feeling like you’re still trying to make up for something you did wrong at age six”), bleak, briefly ecstatic, and frequently hilarious. We feel all of these things; it just depends on the time and day.