The Careless Irony of Environmentalism

The vociferous activist may shout sermons castigating “evil multinationals,” but the solutions ultimately served to prop up the status quo. 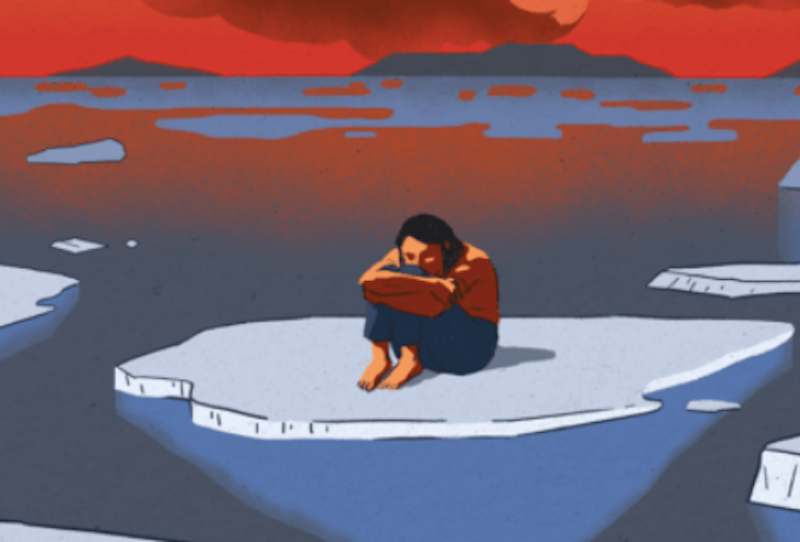 It was a normal day back in high school, at some point in the early-2000s. I was at lunch with a couple of buddies, in the middle of an otherwise unremarkable day—set within the white linoleum floor, round gray lunch tables and ugly blue chairs. Let’s call them Friend A and Friend B. I don’t remember what the three of us were talking about, possibly some mix of classwork, skating, music, or something we saw on Ebaum’s World. Doesn’t matter. The point is, we were just at lunch, hanging out in passive conversation.

Friend A was drinking a can of Sobe. Our high school cafeteria sold a lot of that stuff. This was the heyday of the brand, and of the tribal-tattoo-esque design that came with the packaging. I’m pretty sure he was drinking the green tea, that was the best one. Again, nothing remarkable about this. But then Friend A made his critical mistake. Upon finishing his drink, he tossed the pastel-green empty into the regular trash, instead of the blue recycling bin.

Friend B was suddenly incensed. He grabbed the can out of the trash, threw it at Friend A and yelled, “What the fuck man!? Don’t you care about the environment?” Dumbfounded, Friend A stared for a moment before remarking, “Dude, what the fuck is wrong with you?” before resentfully placing the can into the can-shaped hole in one of the blue bins. Friend B went quiet and looked around aimlessly, as if nothing had happened.

This was interesting for a couple of reasons. Friend B was always known as a “funny” guy—90 percent of his utterances consisted of jokes, silly interjections, or ironic self-deprecation. For the first two months you knew him, he was the funniest person you ever met. Then it got old. And then came the 10 percent of the time he was actually being serious. This had the effect of making his serious interventions seem more profound. Sometimes they were, but this incident just made him look like a moron.

Why do I still remember this? It was hard to forget. And I think it bears metaphorical significance for much of what passes for activism in our own time. Critics of millennials and zoomers have a buffet of delights here: an inexplicable outburst of embarrassing and childish rage; self-serving moral grandstanding; the complete lack of humor and social etiquette; and the personalization of wider social ills.

It reminds me of a passage in Slavoj Žižek’s The Fragile Absolute, in which he states, “Today, the true pieces of trash are the ‘beautiful’ objects with which we are constantly bombarded from all sides; consequently, the only way to escape trash is to put trash itself into the sacred place of the Void.” In this way, Friend B was participating in a semi-religious ritual, affirming the sacred duty of individual action in “saving the planet.” The can’s no longer just a piece of aluminum, but a relic with connections to the afterlife of (slightly) less crowded landfills.

And what else could you have expected from Friend B? After all, he’d grown up in a primarily secular environment, his news consumption a steady diet of whatever Rolling Stone was publishing at the time. As for the clergy, they would’ve been a smattering of celebrities, musicians, and suburban social studies teachers. His emerging faith was in the primary conceit of atomized, End-of-History left-liberalism: the problems in our society can be diagnosed and remedied at the level of individual consumption. The efforts to blame, shame and reform must land on the individual who contributes to landfills, oceanic desolation, and the output of carbon emissions. We are the future, and every one of us has what it takes to Make a Difference™.

Žižek has written about this exact phenomenon as well:

“There is something deceptively reassuring in our readiness to assume guilt for the threats to our environment: we like to be guilty since, if we are guilty, it all depends on us. We pull the strings of the catastrophe, so we can also save ourselves simply by changing our lives.

What is really difficult to accept (at least for us in the west) is that we are reduced to the impotent role of a passive observer who can only sit and watch what his fate will be. To avoid such a situation, we are prone to engage in a frantic obsessive activity, recycling old paper, buying organic food, whatever, just so that we can be sure that we are doing something, making our contribution”

Within this faith, there’s no critique of production. This leaves the primary culprits—businesses and governments—comfortably off the hook. The vociferous activist may shout sermons castigating “evil multinationals,” but the solutions, methods, and rhetoric ultimately served to prop up the status quo.

By being the most visible face of environmentalism, his toddler-like lack of self-control alienates normal, functioning people who’d otherwise be able to join a common political project. He’s the best friend power ever had: controlled opposition. As Georgi Plekhanov said of the anarchists in 1895, he’s a man who “is fated always and everywhere to attain the opposite of that which he attempts to achieve.”

On the psychological level, it resembles the emergence of the repressed Jungian shadow self. As Marie-Louise von Franz described in her contribution to Man and His Symbols:

“The shadow does not consist only of omissions. It shows up just as often in an impulsive or inadvertent act. Before one has time to think, the evil remark pops out, the plot is hatched, the wrong decision is made, and one is confronted with results that were never intended or consciously wanted.”

To widen the lens of where we are, here’s what Jung himself said in the same collection:

“Modern man does not understand how much his “rationalism” (which has destroyed his capacity to respond to numinous symbols and ideas) has put him at the mercy of the psychic “underworld.” He has freed himself from “superstition” (or so he believes), but in the process he has lost his spiritual values to a positively dangerous degree.”

In the flying can of Sobe we see the emergence of the western shadow, bursting out from the facade of ironic detachment and tranquility, revealing the underlying forces of contempt, malevolence and, ultimately, impotence.

It’s a microcosm of where the upper-middle class-reared activist finds himself in 2021. They outwardly feign careless irony and superiority. But inwardly there’s a vast plain of uncertainty and aimlessness. As Plekhanov, again, said prophetically: “Alas, gentlemen, there is no ideal for walking corpses such as you! You will try everything. You will become Buddhists, Druids, Sars Chaldeans, Occultists, Magi, Theosophists, or Anarchists, which- ever you prefer—and yet you will remain what you are now—beings without faith or principle, bags, emptied by history.”