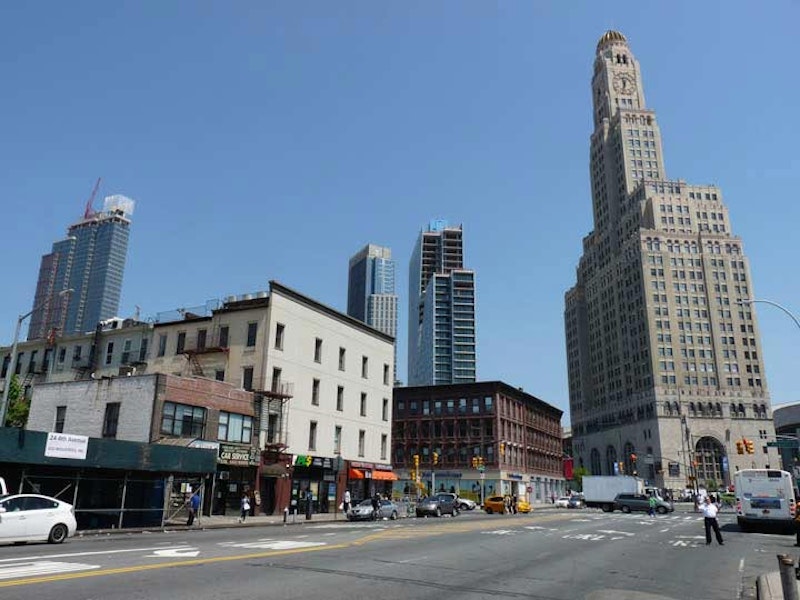 I never tire of scouring Fort Greene, one neighborhood to the east of Brooklyn’s downtown. Fort Greene is named for a fort built in 1776 at what is now Fort Greene Park’s central summit by General Nathanael Greene (1742-1786). The fort, originally named Ft. Putnam, aided in George Washington’s retreat after his defeat in the Battle of Brooklyn in 1776, and was reactivated during 1812 when a British attack was anticipated.

The “Willie” was built by the architectural firm Halsey, McCormack and Helmer from 1927-1929. It’s 512 feet tall, and can be seen from Brooklyn housetops as far away as Bay Ridge and Dyker Heights. It’s the tallest building in Brooklyn for 80 years and remains one of the tallest buildings on Long Island. Its four-faced clock was the largest in the world in 1929, and held the title until 1962, when surpassed by the clocks on the Allen Bradley Building in Milwaukee. The ground-floor banking room has a 63-foot ceiling (it’s periodically open to the public for events such as the Brooklyn Flea (Market), and its windows overlooking Hanson Place are 40 feet high.

The crowning dome was built as a homage to the other Brooklyn Williamsburgh Bank building, on Broadway in Williamsburg (the bank has an “h,” the neighborhood does not, since it was built in an era when Williamsburg still had the “h.”). In 1987, the two buildings became a part of the Republic National Bank and subsequently, the Hong Kong Shanghai Banking Corporation. Currently, the building hosts expensive condominiums, hence its rebranding as One Hanson Place.

At one time the bank’s observation deck was open to the public. Informational plaques describing the 1776 Battle of Long Island were installed in 1976 and they’re still there, as far as I know. 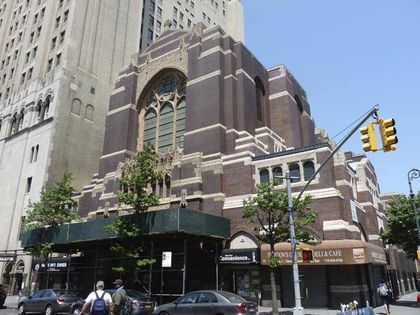 I thought for the longest time that the Hanson Place Central Methodist Church was the Church of St. Felix, as it’s adjacent to that street. Instead it’s the Hanson Place Central Methodist Church. It’s also the only church I’ve ever seen that has leased space to a pizzeria on the ground floor. It quickly followed the Willie, which it adjoins, in 1931 and can be seen as a companion piece, since the architects were the same. Francis Morrone, one of NYC’s foremost architectural observers, says it’s reminiscent of the Liverpool Cathedral in the UK, built in 1903. This is the third church to occupy the site.

The cornerstone notes the previous addresses of Central Methodist, on Summerfield St. in Ridgewood and Fleet St. in downtown Brooklyn. Notice the building detailing at the St. Felix St. entrance, which marks the congregation as having a good number of maritime workers. St. Felix St. wasn’t named for a church, as I’d thought, but Brooklyn Heights merchant John Renane St. Felix, a son of French immigrant Mary Antoinette St. Felix, whose father had been an aide to the queen with the lopped-off noggin. St. Felix owned acreage the city of Brooklyn purchased in the early 1840s and laid out the rough grid of streets that marks it now. 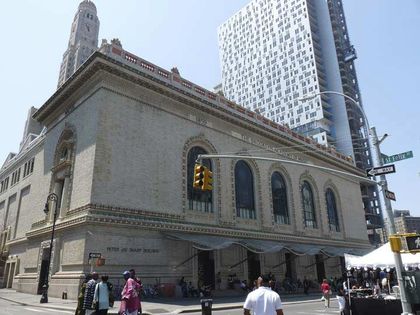 Here’s the Brooklyn Academy of Music, Lafayette Ave. between St. Felix St. and Ashland Place. The Academy was founded in 1861 and was initially located on Montague St. in a building designed by Leopold Eidlitz, one of the premier architects of his era. A lecture series there featured educator Booker T. Washington, Mark Twain and explorer Henry Stanley, who sought Dr. David Livingstone in Zanzibar, Africa. That first building burned down in 1903; the new building went up in 1908, designed by Henry B. Herts and Hugh Tallant. The initial production was Faust with Enrico Caruso as lead tenor. You can’t see it too well here, but stroll past for a look at some incredible terra cotta detail.

I’ve been inside just twice: in June 1981 for my graduation ceremony from St. Francis College, and again in December 1989 for Lou Reed and John Cale’s presentation of “Songs for Drella,” a tribute to the recently deceased Andy Warhol. 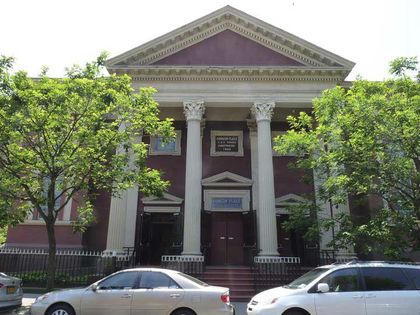 One of the finer buildings in an area full of them is the Romanesque style, Corinthian columned Hanson Place 7th-Day Adventist Church at South Portland Ave. is a NYC Landmarked building that was first built as the Hanson Place Baptist Church from 1857-1860. Its quartet of Corinthian columns, massive pediment and stained glass work are notable. The Adventists, who worship on Saturdays and differ in other practices from other Christian churches (including virulent anti-Catholicism), were founded in 1860 by Ellen Gould White. An interesting sidelight is that health food enthusiast John Harvey Kellogg, whose brother William founded the cereal empire, was an Adventist and the faith’s teachings informed his early work. 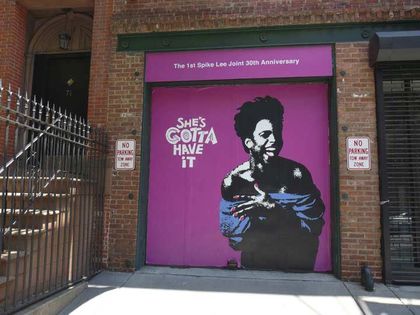 Walking north on South Elliott Place from Lafayette, you find the headquarters of 40 Acres and a Mule Filmworks, the production company of Spike Lee. The company was named for an episode from the Reconstruction, the period in the defeated South following the end of the Civil War. In 1865 General William Tecumseh Sherman issued “Special Field Order 15,” ordering distribution of property amounting to 40 acres to a number of freed slaves; the order included surplus army mules. After the war, Abraham Lincoln’s successor, Democrat Andrew Johnson, reversed the order and returned the land to its previous owners.

In early 2016, Lee held a dance party on South Elliott Place celebrating the life of the recently deceased Prince that attracted thousands. Many of his early films are set in Brooklyn; Lee formerly resided in Fort Greene and has been a vocal critic of so-called gentrification. 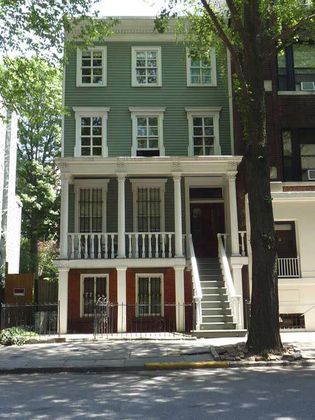 Woodframe buildings in Brooklyn’s older neighborhoods are disappearing, victims of property owners’ desire to build more lucrative multi-family houses on their plots. You can still find them in pockets in Park Slope, Fort Greene, Clinton Hill and Bedford-Stuyvesant. Mixed among the brownstones in Fort Greene you’ll see some leftover wood frame buildings that date from the Civil War years or even earlier, such as 63 and 65 S. Elliott Place, #59, and #41. #41 dates back to the mid-19th century, but has been renovated in recent years and a porch added to “retrofit” it to look more its age. Previously it had been porch-free and covered with aluminum siding. 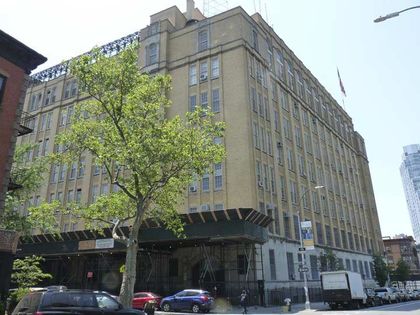 Brooklyn Technical High School opened in 1922 at 49 Flatbush Ave. Extension (near Fulton St.) in a converted warehouse. It moved to its present building, a 12-story structure at 28 Fort Greene Place, in 1933. It’s one of NYC’s marvels you don’t read or hear much about. Brooklyn Tech features an Olympic-size swimming pool; foundry; a materials testing lab; an aeronautical lab; an 18,000-watt radio transmitter (and a 456-ft transmitter tower, when combined with the building’s 145-ft. height, made Brooklyn Tech the tallest combined structure in Brooklyn until recently); the 3000-seat auditorium; and a robotics lab. It’s considered one of NYC’s most elite high schools. 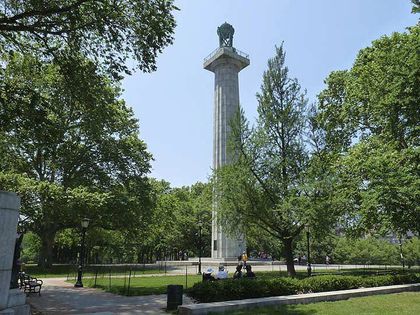 Walt Whitman, editing the Brooklyn Daily Eagle from 1846 to 1848, pressed for a public park in the area, and in 1847, Washington Park, named for the president, began development. Whitman lived nearby, at 99 Ryerson St. in a building that’s still standing, and it’s not surprising he wanted a park near his home.

Washington Park was partially designed by Frederick Law Olmsted and Calvert Vaux, the architects who went on to develop Central and Prospect Parks. It was constructed beginning in 1847, officially opened in 1850, and redesigned in 1867 by Olmsted and Vaux; in 1897 the park was renamed for Fort Greene, the environs of which by then had become a handsome residential neighborhood. The two-block stretch of Cumberland St. lining Fort Greene Park’s eastern side is still called Washington Park.

During the Revolutionary War, the British anchored 11 prison ships in Wallabout Bay (the body of water west of Williamsburg) and subjected American prisoners of war to deprivations and torture during the years 1776-1783. More than 11,000 died in the ships. There were early monuments to those who became known as the “prison ship martyrs”: some of the remains were buried in the vicinity of the Navy Yard in 1808 and interred in Washington Park in 1873. The current monument, a 148-ft. Doric column, was designed by McKim, Mead and White (the firm that would later design Pennsylvania Station) and dedicated by William Howard Taft, then President Teddy Roosevelt’s Secretary of War, in 1908. The Prison Ship Martyrs Monument remains one of Brooklyn’s more striking landmarks, visible from any part of the neighborhood. The remains of the prison ship martyrs are interred under the monument.