RQ meets a slow, slimy friend by his mailbox while his wife sleeps for half a week, recovering from her trip aboard Air Force One. 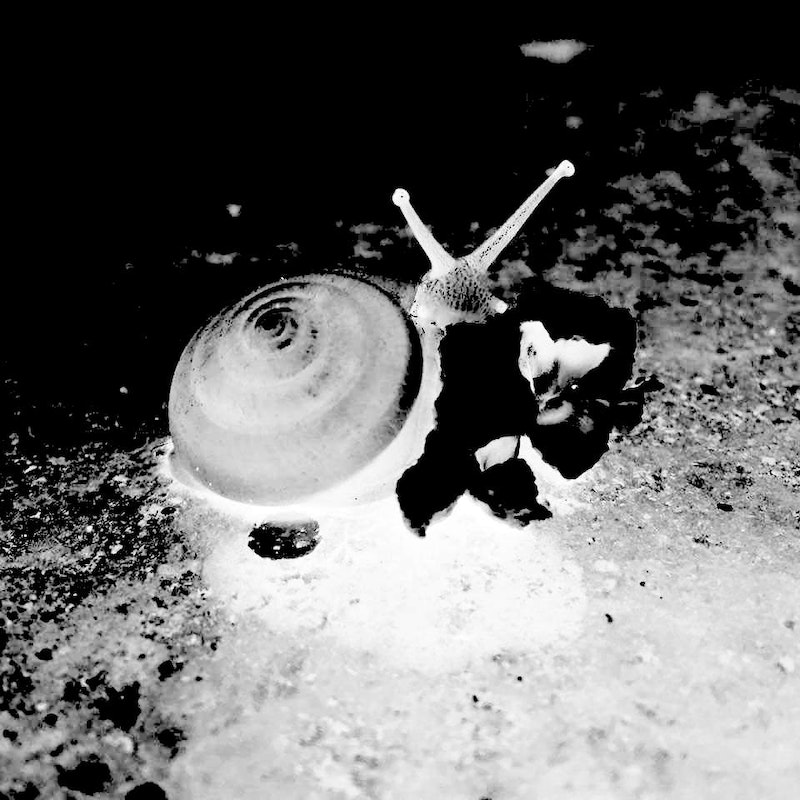 Pictured: A snail in the shadow realm, eating popcorn.

At the risk of sounding like a “chicken with its head cut off”—a vulgar expression—I find it disturbing when people mute me on Twitter. First of all, I’m a bird. The site is named after us. I should have special privileges. Second, why not just unfollow? I won’t be offended. I might want to hurt you, and I might follow through on that (but only in a self-defense situation in which the other party initiates violence on me), but I won’t get seriously bent out of shape about it. Don't you care what I have to say? Aren’t you a climate change activist? Don’t you want to know what it’s like from the frontlines when the Earth is dying? That is what you believe, correct? Let men tell you something: the only way to find out if climate change is real is to follow my Twitter page. That’s just facts.

The reality of my situation at present is less than ideal: I’m still keeping my cousin Bennington in his cage (and he’s doing just fine), Monica’s doing her thing, and we keep a nice house. We’ve stopped watching television since Donald Trump left office; Monica insisted we “cut all the cables” in our barn once she got back from her trip with the newly inaugurated Kamala Harris and Joe Biden, and I complied, because I’m a good husband. Well, I try. The suspension cables in our barn haven’t caught any dreams, or any starling friends—they seem to be there only to mollify my wife’s superiors and calm her nerves. When I tell you it is like spaghetti latticework in my house—my barn—perhaps you’ll have some idea of my predicament.

Nevertheless, I still get paranoid sometimes. The other day I went out to get the mail and a small snail (about half an inch wide) came up to me. I waited, and waited, and waited, and waited, and I waited some more, because I’m a friend of all creatures on this green earth. I wanted to hear what the snail had to say. “Rooster, my friend…” I never met this snail before, how did he know we would be friends? “You can’t keep Bennington in his cage forever. He’s not doing just fine. And, for that matter, neither am I. You know how much money I’m losing every week your cousin is in that damn outhouse? He used to keep me plush, in the pink. I was ready to retire like a good old snowbird and finally get my shorefront place in the Carolinas. No more. I’ve had to refinance my log and now I’m not sure where my next meal is coming from.”

“Why don’t you sell that shell? Looks pretty nice.” Mr. Snail didn’t appreciate this remark. He was mad at me, but lacking a spur claw or any other part of his body he could use as a deadly weapon, he was left only with words. I waited, and waited, and waited for him to reply, allowing him a grace period of 10 minutes before I got my mail and went back inside. “You know, you really shouldn’t talk like that to veterans. We fought for your right to get the mail in the middle of the night and receive sage advice from snails. But no—you’re like so many Americans, so eager to reject and ignore the world around you, unable to recognize yourself or your own culpability in the stripped-for-parts world we live in now. No one trusts anyone else anymore. Used to be you could go to a general store, any general store, and get a corndog and a soda. Now they don’t even have general stores, they just have McDonald’s and Popeyes.”

As he went on, I slowly backed away, at approximately his speed, which was stupid because he immediately recognized what I was doing. I should’ve just had an Emma moment and said, “Gotta go” and darted out of there like a good bird. No, the snail saw me trying to give him an Irish Goodbye in the middle of his stupid speech. “You can leave me,” he said, “but I will not leave you. Ever.”

That was some weird shit… I did leave him, but I’m not certain that the snail’s presence has left my barn or me. Monica hasn’t come down for dinner yet. I must say she did look a big haggard (but beautiful, of course) when she got back from her trip with the Presidents. “Isn’t Mrs. Harris Vice President.”? Monica nodded. “Yes… for now.” I had no idea what she could mean by that. Nevertheless, I wished her a good night’s sleep and now I haven’t seen her in three days. Perhaps I should check on her, but as you may know, it’s considered very rude to disturb a sleeping bird, particularly a rooster or a hen, as they’re known (falsely) to be early risers. This isn’t the case—we’re just loud all the time. We’re allowed to be loud. We’re birds. You cannot catch us. Even if we can’t fly, we’ll outrun you. There’s nothing you can do to stop a bird if that bird has enough determination, intelligence, and willpower to defeat humankind. The bird may not want to destroy humankind, but it must seek to establish a supremacy over humankind—this is our creed.

If you find this statement offensive, consider our current reality: would anyone argue that human beings don’t have supremacy over this Good God’s Green Earth? And, it follows, if that status were threatened, they would do almost anything, including killing each other, to maintain that status. We birds aren’t so different from you. We have aspirations and dreams of chrome cities in the sky, with flying bales of hay and endless corn and a sun that never rises, a sky that always remains black, our obligations forever set to the side. We dream, and we dream, and we dream, but nothing ever comes of it. But even if our hopes meant nothing, they were good, and we needed them, our hopes: they were a necessary utopia.

I forget who came up with that. I think I did. Don’t bother Googling it, just take my word for it. Don’t say “bird word” or “bird is the word” either, because then I’ll assault you, violently, and it won’t be a self-defense situation, really it would be on sight and whoever I see first is catching claws and talons and will be meeting their maker with a lot less blood than they came into this world with. I wouldn’t call a bull “red” to his face, and I wouldn’t call a man with a gun the monster that he is. Take note of whom we are. We know you eat us, factory farm us—and we’re watching. We’re silent, for now, but we’re watching. The day will come when birds are silent no more.

But snails? I doubt they’ll ever have a “moment.” Too slow and ugly, zero utility except as fodder for French food. A fate worse than death: to be eaten by a frog. Tres scandále! I don’t think my neighborly snail friend has ever been to Europe, but I think he’d be happier there—not France, but perhaps Spain. That’s a country that seems more suited to his tastes and speed. Snails need siestas—roosters? Hens? Birds? We’re always working, and we are always flying, even if we’re on the ground.