The shop became a magnet for spiritual seekers and teachers around Los Angeles. 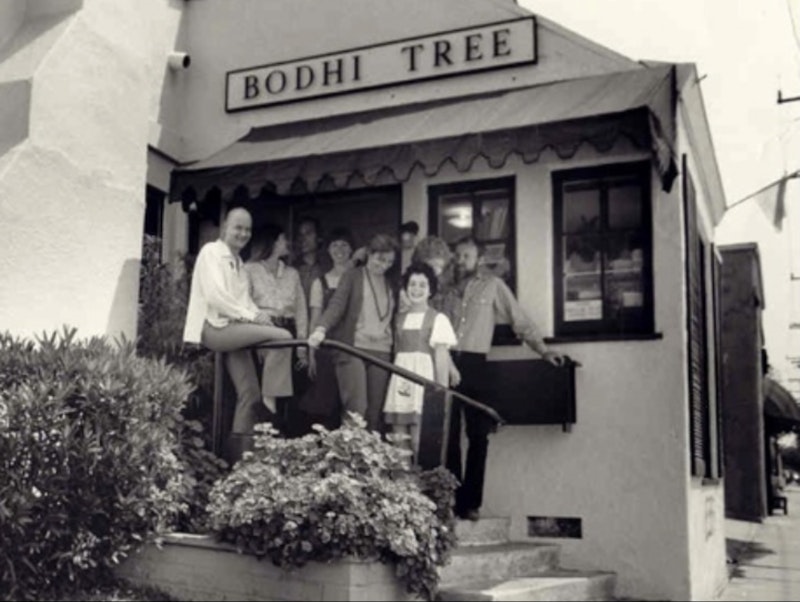 The Bodhi Tree stocked titles on religion, spirituality, philosophy and metaphysics. Shirley MacLaine credited the Bodhi Tree in her 1983 biography Out on a Limb for inspiring a midlife spiritual quest. She wrote, “Making that simple, lazy afternoon decision to visit an unusual bookstore in West Hollywood was one of the most important decisions of my life.”

Stan Madson and Phil Thompson were aerospace engineers for Northrup Grumman helping build missiles and bombs for the Vietnam War. A fellow engineer, Bernie Glassman, became a Zen roshi and discussed Buddhism at work. Madson and Thompson took up meditation and grew interested in eastern religion. Conflicted about their role in the military industrial complex, they quit their jobs, pooled savings and built a bookstore that would become an “American Library of Alexandria.”

Madson and Thompson leased a two-bedroom 1400-square foot house on Melrose Ave. among the antique stores and suburban homes. They purchased 2000 books on the world’s wisdom traditions, and named the store after the tree under which the Buddha sat in meditation until attaining enlightenment. On July 10, 1970 at 2 p.m., a time chosen by an astrologer, the Bodhi Tree Bookstore opened its doors. It became a magnet for spiritual seekers and teachers around Los Angeles.

Customers purchased books by authors like Carlos Castaneda, Alan Watts and Richard Bach. The store had sections on astrology, Buddhism, herbal remedies, meditation, vegetarianism and yoga. They sold candles, crystals, incense and tarot cards. Visitors drank free herbal tea while New Age music played. People were encouraged to linger for hours as if in a library.

In 1987, I worked at the Bodhi Tree. Duties included stocking, cleaning, customer service and handling register transactions. I loved helping customers find an obscure spiritual tome or introducing them to classic works of literature with spiritual themes like W. Somerset Maugham’s The Razor’s Edge or Siddhartha by Herman Hesse.

Each day during lunch, I grabbed a book from a different section and read beneath an actual Bodhi Tree in the backyard. I read mystical books by Gurdjieff. I learned about the hierarchy of angels from William Blake and Emanuel Swedenborg. I studied books on meditation by Thich Nhat Hanh and the psychology books of Carl Jung. My favorite works were the poetry of Rumi and the wisdom lectures of Krishnamurti.

During my tenure at the Bodhi Tree, New Age literature became a cultural phenomena. Popular books included The Way of the Peaceful Warrior by Dan Milman, You Can Heal Your Life by Louise Hay, The Road Less Traveled by M. Scott Peck and MacLaine’s Out on a Limb. The “MacLaine Boom” increased Bodhi Tree sales from 300 to nearly 2000 books a day. The store added an annex for used books and a dedicated event space for speakers such as Deepak Chopra and Marianne Williamson.

Madson and Thompson were permissive managers. There was no dress code or required sales patter. Their only employee rule was punctuality. They installed a security system near the front door to prevent book theft but never turned it on. Thompson believed that if someone stole a book then perhaps they were meant to have it.

The Bodhi Tree staff was as fascinating as the customers. Employees included artists, actors, musicians and yoga instructors. Workers gave each other Reiki treatments during breaks. One employee spoke Sanskrit. Another translated Aramaic texts. One guy created his own pictorial language inspired by the inherent energy found in all objects.

The Bodhi Tree hosted talks from renowned authors and spiritual teachers. There were lectures on meditation and numerology and incorporating spirituality into business practices. I remember an obnoxious clairvoyant who claimed to be able to communicate with the dead. I told him, “Your dialogue with the living needs some work.”

By the mid-1890s, the Bodhi Tree reached its peak. The store stocked 35,000 titles, the employee roster reached 99 people and yearly revenue was $5 million. New Age books were appearing on The New York Times bestseller list and chain stores like Crown and Barnes and Noble began selling spiritual titles. Amazon eventually took its toll.

By the early-2000s, Bodhi Tree sales were falling 15 percent per year. On January 2, 2012 at 5:30 p.m., a time chosen by an astrologer, the Bodhi Tree bookstore closed. The Los Angeles spiritual community was devastated. Patrons shared stories about the Bodhi Tree providing a refuge to help them overcome negative lifestyles. Candlelight vigils were held on Melrose Ave. Regulars hugged employees and drank one last cup of complimentary herbal tea.

The Bodhi Tree holds a special place in my own heart. It’s where I met the woman who became my wife and where we adopted our cat who spent 22 beautiful years in our home. Thompson and Madson had become septuagenarians. They knew it was time to move on. “We’ve been able to bring something into the world fraught with meaning,” Thompson said. “This is a place that helped people transform,” Madson added.

The Bodhi Tree came to exemplify a truth inherent in Buddhist teaching. Even bookstores are impermanent.