John Godey's work from The Talisman to The Taking of Pelham One, Two, Three. 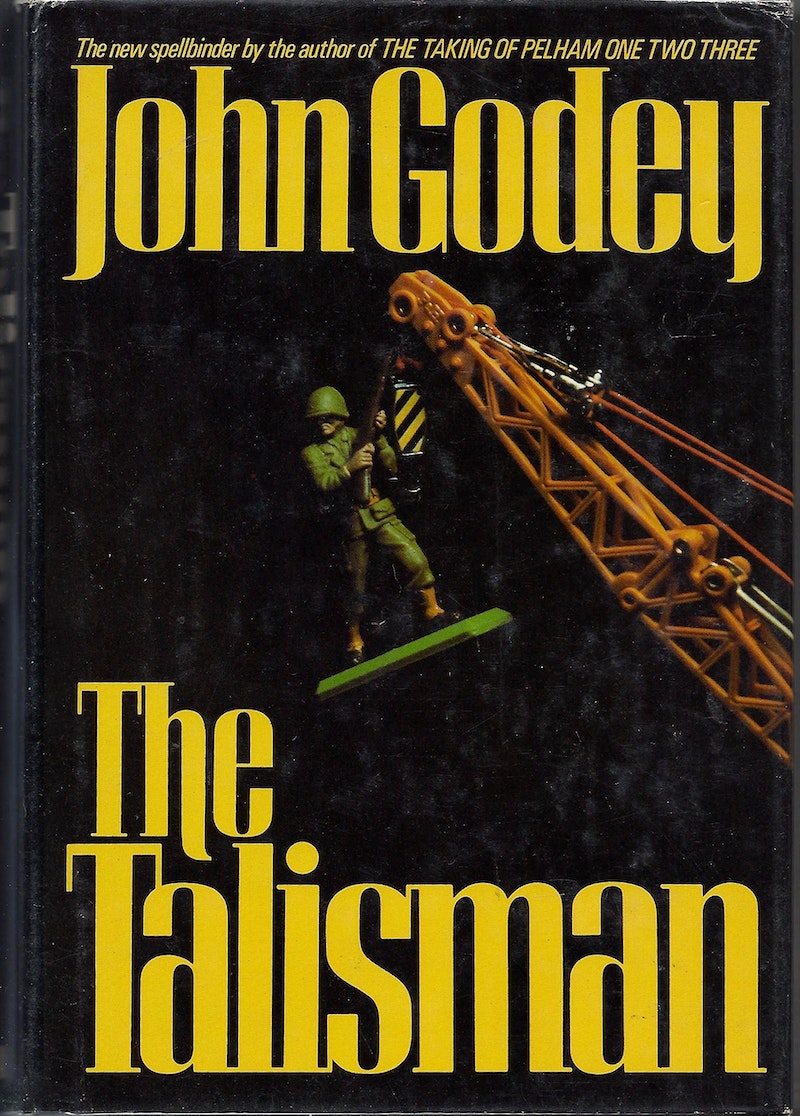 Hollywood producers are in the habit of recycling stories that’ve previously made money. Sometimes it works. In 1974 Palomar Pictures and Palladium Productions released a film titled The Taking of Pelham One Two Three, about the hijacking of a New York City subway train.

“Implausible, silly, stupid,” I thought, but I saw the movie. It was much better than I’d expected, and it was one of Walter Matthau’s best. Hollywood liked it so much, they did a poor job of making a TV version, and then another theatrical release in 2009, this time featuring Denzel Washington and John Travolta as the lead bad guy. This was, to me, one of the few times when the remake stood up next to the original. There’s a humanity to Denzel’s detective portrayal that isn’t there in Matthau’s glib MTA tough guy role. The intervening TV version you can just toss.

Like many films, the screenplay follows a book, also called The Taking of Pelham One Two Three, written by John Godey. Godey is a pseudonym for New York writer Morton Freedgood. He worked for several different production companies, including Paramount and United Artists. Disney made a movie called Never a Dull Moment based on Godey’s character Jack Albany. The reference to Godey’s work that resonates with me is in the Beastie Boys’ Sure Shot, when they reference Pelham. The title is derived from the call of specific subway trips, that is, this particular train left its origin station, Pelham Bay Park, at Westchester Ave. in the Bronx at 23 minutes after one in the afternoon.

After seeing the movie and reading the book, I dug a little deeper into the author’s work and found The Talisman. It’s another story about an audacious crime: a gang of thieves steal the remains in the Tomb of the Unknown Soldier in Arlington National Cemetery. That’s a good treasure to ransom, if you can get away with it, but the scam is fraught with all the same issues a live kidnapping might have. The robbers are teamed up because each is a Vietnam veteran, unhappy with the way they’ve been treated, post-service. The cadre of subway hijackers in Pelham were hooked together, at least in part, following bad employment histories at the MTA.

The chances of actually pulling off the Arlington heist are pretty low, given the work of the elite Old Guard. Officially the 3rd U.S. Infantry Regiment, they’ve guarded the tomb since 1948. In November, 1921, the remains of a soldier who died in World War I in France were placed in the tomb. In 1958, remains of soldiers killed in World War II and the Korean War were added to the monument. An Air Force pilot who lost his life in Vietnam has been removed from the tomb, as he was ultimately identified by DNA. The cemetery states they hold the remains of 4723 unnamed military dead.

The U.S. Army trains the soldiers who guard the Tomb, to some exacting standards, including their height. The First Relief’s soldiers are 6’2”-6’4’, but you can make Third Relief if you are at least 5’11.” The Guards march a walk of exactly 21 steps, and then turn and face the tomb for 21 seconds. They move their weapon to their outside shoulder and repeat the walk in the opposite direction, and count off (silently) the 21 seconds again. This continues until the guard’s changed. That happens every 30 minutes, from April through October, during hours while the cemetery is open, and once an hour from November through March. When the cemetery’s closed, the guard changes every two hours. The guards have an official shift of 24 hours on, 24 hours off, which includes time to ready their uniform and equipment for the following day’s tour. This effort is said to take as much as eight hours. The average tour a soldier stays with the guard is about eight months.

Due to the pandemic, the Tomb has been closed to the public for many months. It reopened with a ceremony on November 8th. The Guard group now includes women, the most recent of five to be awarded the Tomb Guard Identification Badge is SFC Chelsea Porterfield. She’d be pleased to learn the plot twist at the end of Godey’s The Talisman. When the thieves open the remains brought back from France, they find a female.