Pier 17 Through the Ages

Assaulted by the smells of raw fish and other activities at the South Street Seaport. 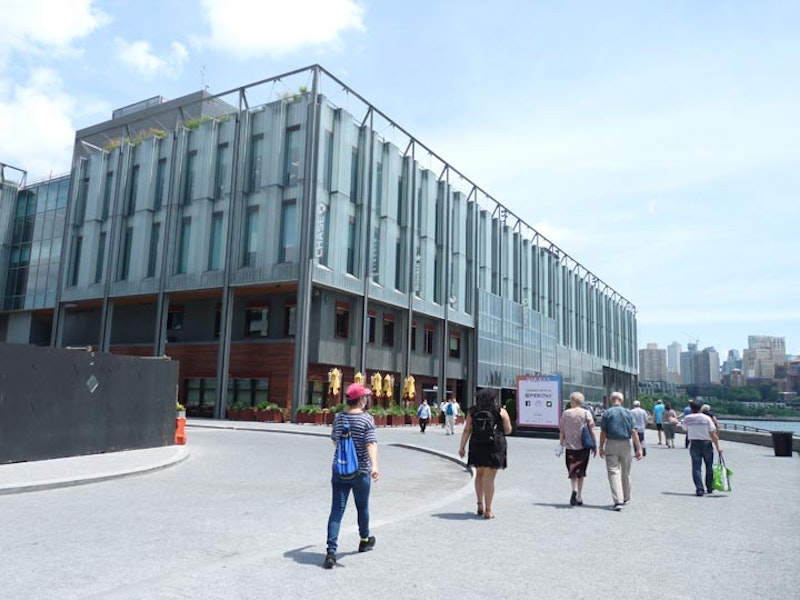 I’ve visited the South Street Seaport a lot—I’m in there every couple of months or so. Unlike a lot of New Yorkers I don’t have a disdain for tourists, or find them irritating or inconvenient. I’m not in Manhattan every day and don’t have to maneuver around them much, and I’m one of them—I’ve been a tourist in my own city for decades.

The original Pier 17, before its closure in 2014, was tacky, wacky and tourist-friendly, with three levels of stores selling mostly gewgaws and cheap clothing, but it had one of the best food malls in the city, which pulled off the miracle of staying away from national franchises for the most part and despite that, featuring vendors selling locally-made treats at reasonable prices. The dining area was a vast hall half of which, unfortunately, was given over to a kiddie attraction toward the end of the original Pier 17 run.

The original shed was demolished and what you see here opened in 2019, a sterile Wall Street glass-walled building, that features some expensive restaurants, including Momofuku, which means “lucky peach” in Japanese. It was constructed by the Howard Hughes Corporation as part of a $785 million investment. There were high hopes of attracting big name emporia, but it serves mostly as office space with some restaurants thrown in. There are plenty of escalators, that’s for sure. There’s a rooftop area with a nice (albeit obstructed somewhat by metal ornamentation) view up and down the river, though half of it’s roped off from the peons, with the other half occupied by a restaurant called The Greens with outdoor seating augmented by a large stage that will be home to concerts, I presume.

Upon nearing the Seaport, it used to be that your nose was immediately infused, or assaulted, depending on your outlook—with the smell of raw fish. For over 180 years, from 1822-2005, this was the Fulton Fish Market, where every wholesale seafood dealer brought in catches from all over the Northeast to sell to restaurateurs and deli owners—in the early morning hours, the fish was unloaded from the South Street docks which lined the street from here to the Battery, and then, after the East River Drive was constructed and the docks mostly eliminated, the fish were unloaded from trucks. The facility moved to Hunts Point in the Bronx in November 2005.

When I walk in the Seaport area, I think of The New Yorker journalist, North Carolinian Joseph Mitchell (1908-1996), who spent years here speaking to many of the thousands of workers in the Fish Market area, chronicling their stories and writing about the area’s architecture. Mitchell was a quirky figure—he stopped writing and editing in 1964, yet maintained his office at The New Yorker for every year of his life after that, with the apparent indulgence of editor William Shawn for many of those years. Mitchell helped found the South Street Seaport Museum. In the 1980s, a friend gave me a copy of the Mitchell compendium Up In The Old Hotel, which gathered some of his best work together in one volume. It was, and continues to be, one of my own website Forgotten New York’s main inspirations. 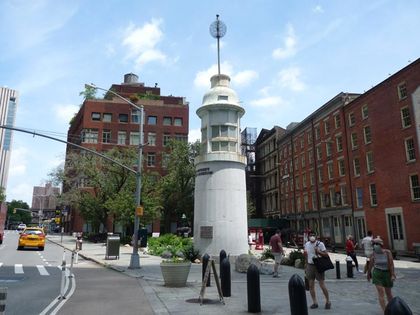 New York City has formal, informal and completely accidental homages to those who died in the sinking of the HMS Titanic on April 15, 1912. On the corner of Fulton and Water Sts. stands a reminder of one of the world’s most infamous naval disasters. The Titanic Memorial Lighthouse was dedicated exactly one year after the sinking and was originally placed atop the Seamen’s Church Institute, a 14-story building at South St. and Coenties Slip downtown. In 1967 the Seamen’s Institute moved and the building was later demolished; the lighthouse was preserved and by 1976, installed at its present location. The tall pole at the apex originally had a metal ball that, when signaled by a telegraph at the National Observatory in Washington, DC, would drop at noon daily.

This block of Water St. was on the waterfront during the colonial era, until landfill extended Manhattan island further east and Front St. was constructed, and later further east and South St. was built. 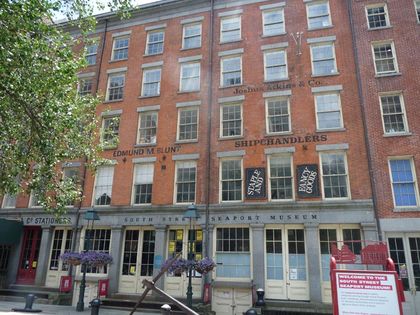 Three Greek Revival buildings dating to the 1840s stand on Water St. behind the Titanic memorial. Of particular note is Bowne & Co. Stationers at #211, a working job print shop as well as a department of the South Street Seaport Museum. It was one of the first preservation projects undertaken by the Museum in 1975.

Two hundred years before, a dry goods store called Bowne & Company opened, and it later focused on printing, especially financial documents like prospectuses and merger proxies. One of its customers was Lehman Brothers, the investment bank that collapsed in 2008. Today, Bowne Printers still works in handset type, as was done 200 years ago.

The museum says the original shop’s inventory was itemized in a city directory in 1829 as gilt-edge letter paper, straw paper, tissue paper, copying paper, drawing paper, blank books, bill books, cargo books, bankbooks and seamen’s journals. Print shops of this type originated common phrases like “uppercase” and “lowercase” as the letters were once kept in two separate cases. “Mind your p’s and q’s” came about because the two lowercase letters are mirror images of the other. 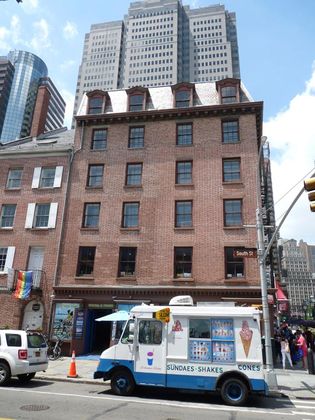 Sloppy Louie’s, which closed in 1998 when owner Joe Morino retired, occupied the ground floor of this building on the NE corner of South and Fulton. Like the majority of the older buildings in the market district, it’s made of hand-molded Hudson River brick. It has an ornamental tin cornice and a late-covered mansard roof. It’s one of the handsome, symmetrical old east River waterfront buildings that had been allowed to dilapidate.

In Mitchell’s stories in The New Yorker in the 1940s, Sloppy Louie’s then-owner Louis Marino took Mitchell upstairs to the shuttered rooms to see what was there. Flash forward several decades, and a manager at the South Street Seaport Museum explored the upstairs once again and found it more or less unchanged since 1952, with artifacts from decades prior.

#4 Fulton had always been home to restaurants. Sweet’s opened in 1847, occupying both #4 and #8 next door. Sweet’s lasted until 1992, when a storm in December 1992 flooded the Seaport and knocked out electricity. Odors of dead fish and rats permeated the neighborhood for days. 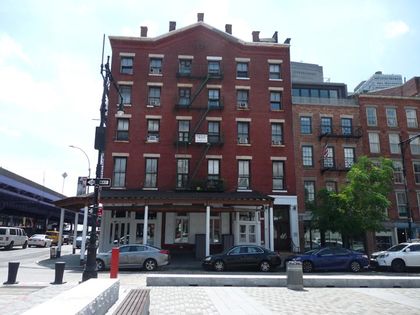 The Paris Café occupied the ground floor of a five-story brick building at South St. and Peck Slip. The handsome structure was built in 1873 and was purchased 10 years later by liquor merchant Henry Mayer and converted to a hotel and a boardinghouse. Some of the frequent guests were Thomas Edison, Annie Oakley, “Diamond Jim” Brady, and Teddy Roosevelt when he was police commissioner. Meyer opened the Paris Café in 1883 and while the hotel is long gone, the Paris was still going strong… or was, until the pandemic caused an abrupt end to the Paris in 2020. The space now stands empty awaiting new tenancy. 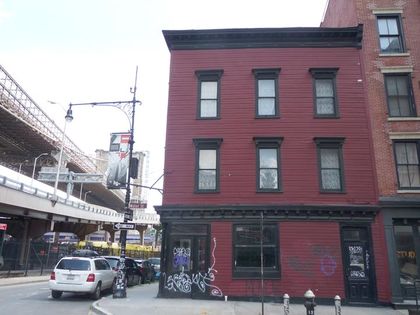 According to sources such as the late Richard McDermott of The New York Chronicle and Steve Redlauer and Ellen Williams of “The Historic Shops & Restaurants of New York,” the Bridge Cafe, at Water and Dover Sts., was the oldest establishment in Manhattan that had continuously been run as a tavern. In a number of different guises and many different owners, it had been here, in this building since 1794. Unfortunately, in 2012 Hurricane Sandy did a number on it, as well as several other area buildings, and it has never reopened.

Previous tenants have included the Hole in the Wall, operated by One-Armed Charley Monell. An 1847 visitor to the Hole in the Wall would have had to contend with Monell’s two barmaid/bouncers, Kate Flannery and Gallus Mag. The latter was said to have a habit of biting off the earlobes of especially unruly customers. Charley kept a jar of pickled earlobes over the bar. It doubled as a brothel in the 1870s when it was run by Tom Norton. It had been known as the Bridge Cafe since 1979. Two people who were Forgotten New York fans met at one of my tours had their first date here. The building was constructed on the water’s edge, as Water St. marked the original shoreline. The Brooklyn Bridge behind it went up in 1883. It was originally listed as a “grocery and wine and porter bottler”; in that era, groceries sold wines and spirits and were issued liquor licenses. 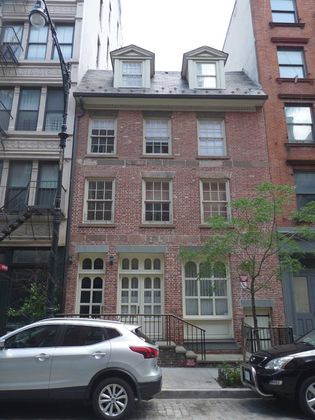 Originally built between 1773 and 1781 and rebuilt in 1998, the Captain Joseph Rose House nearby at #273 is the third-oldest building in Manhattan after St. Paul’s Chapel on Broadway and the Morris-Jumel Mansion on Edgecombe and 162nd in East Harlem. Capt. Rose, a mahogany merchant, moved out in 1791 and was an apothecary and shoe store by 1812. Things turned south after that, though, as Water St. became the province of cheap hotels and brothels. According to journalist Luc Sante, it became a dance house populated by what the local rags called “the most depraved and infamous population on the entire New York Island.” By 1868 it was the site of Kit Burns’ Dog-Pit or, to its patrons, Sportsman’s Hall. Burns, a member of the Dead Rabbits gang, held bareknuckle boxing matches and ratfighting and dogfighting matches here. These dogs were sometimes starved for several days beforehand. Burns had two of his favorite dogs stuffed and mounted over the bar. The first, a black and tan colored terrier named Jack, reportedly set an American record by killing 100 rats in six minutes and 40 seconds. The other dog, Hunky, was a champion fighting dog "that expired after his last great victory." The building, shortly after, became a shelter for “fallen women.”

The building soldiered on for several more decades, passersby never guessing it was one of NYC’s oldest. It was nearly destroyed by fires in 1904 and 1976, and was completely rebuilt in 1998 along the lines it had in 1868 when Kit Burns ran his dog and rat pits.