Memoirs of a Girl Scout Leader 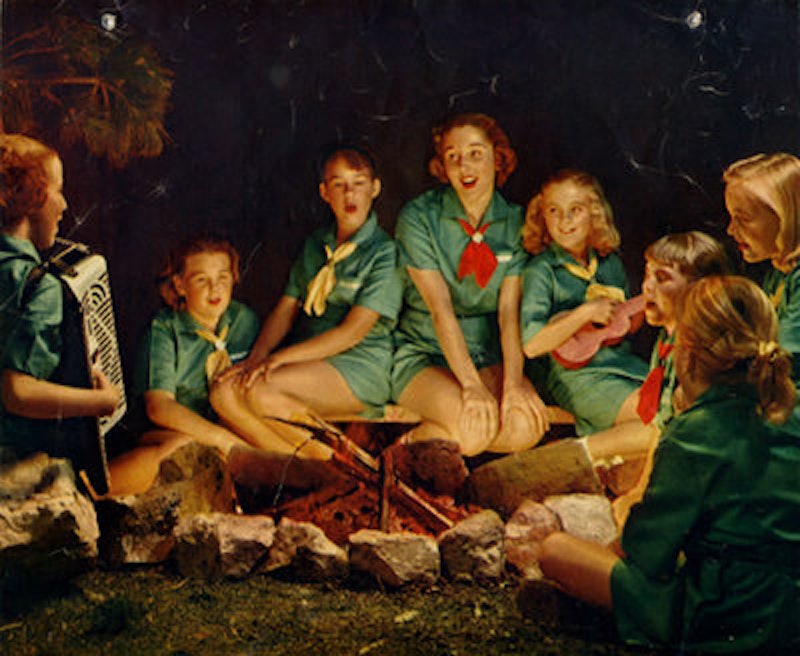 This month marks the end of an era for me; the completion of six years as a Girl Scout leader. I can say “Girl Scout” now instead of “Gal Sprout” because my youngest daughter is finished with scouting after four years (I also put in two years as her oldest sister’s leader forever ago). I used to say “Gal Sprout” when I wrote about being a leader because I was scared of losing my troop. One day after I wrote a blog post called “Fuck a Duck,” I got a call from the national council asking if I was the same Mary McCarthy who is a girl scout leader and who someone reported on Facebook as having seen write a sex toy review. She said she was sure it wasn’t me. I assured her it was.

She hemmed and hawed and said that there had been a complaint: that it was inappropriate for Girl Scout leaders to write sex toy reviews, that they were considering removing me as a leader from my daughter’s troop. I noted that without sex, which I thought was still legal, the Girl Scouts wouldn’t be here in the first place, that I had been doing my paid job when I wrote the piece, and that I was fairly certain I hadn’t traded in my First Amendment rights for a Girl Scout leader pin. I added that we’d let the media and the Supreme Court decide that, though, if that’s how she wanted this to roll. No, I would not give up my troop. She dropped it.

I loved being a Girl Scout leader. I especially like camping, so I took training and over the six years as a leader, took the girls on many camping trips. I can still sing the words to the songs and passed some of them down to the new generation. Girl Scout camps today are in trouble, because nowadays leaders don’t take troops camping as much. Camps are closing or selling land; the one we visited most recently now faces an imposing wall on a hill of suburban McMansions, so that’s what you see when you go “hiking.” If I could volunteer in any way in the future, it would be to train leaders so they can take troops camping.

I like to think the girls learned something. Going away overnight (into the woods) without your parents for the first time is a brave thing to do. I had to work hard to convince parents to let girls pack their own camp gear: they can’t find a toothbrush in a cabin in the woods in the dark if they didn’t pack it in a certain place themselves. Independence is a good thing. Gotta cut the cord sometime, moms. Teaching girls to light a fire was a bit controversial with cord moms, but a few weeks ago at a meeting a quiet girl who hasn’t said more than a few things to me in four years came up and thanked me for teaching her to light a match because she got to light the candles at her own birthday party. It’s things like that that make it worth all the trouble and training and institutional bullshit. I hope when the girls grow up a few will find that the “love for camping” seed sprouts into a flourishing, grown-up appreciation for nature and the outdoors, as it has for me.

I will miss the troop. It’s been amazing to watch the girls grow from the apple-cheeked Kindergarteners they were when I first met them to the tall, sometimes sassy tweens they are today. They change so quickly. Throughout the four years, my co-leader was a complete savior (she did all the unending paperwork and kept us out of trouble with “council” while I was yammering on about canoeing and craft supplies and alphabet nature hikes). I’ll miss working with her; she’s an amazing friend and our troop was lucky to have her. In Girl Scouts, the traditional song goes “Make new friends, but keep the old. One is silver and the other gold.” It’s a good life lesson for all of us, Girl Scouts or not.