The Apotheosis of George Washington

Messianic politics, family and religion: then and now. 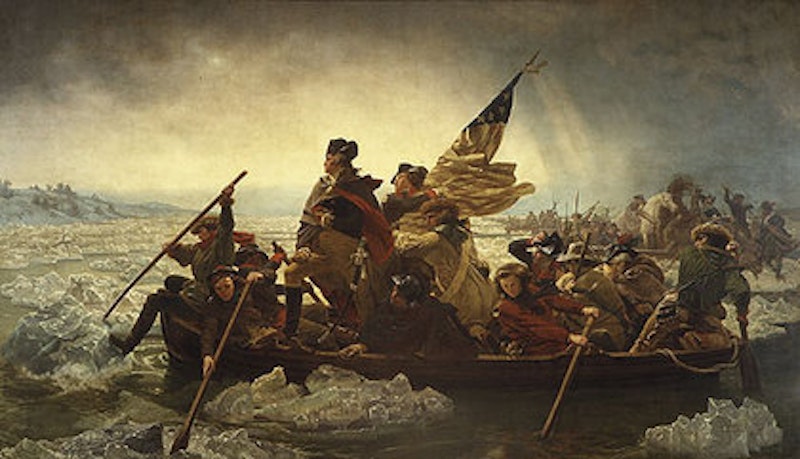 Despite the chinless and generally loathsome presence of Paul Giamatti, HBO’s recent John Adams series thrilled me. Here was American history with teeth! Here were the bland patriots of our national iconography enlarged as heroes, men with passion and failings and, in many cases, kind of awesome outfits. I had a pretty decent history education in high school—my teachers went beyond a numbing catalogue of dates and taxes and acts to reveal some of the sinew of American history, but I still felt a little envious of Europeans. They had such a long history; they had kings who died in battle and, in the case of the Italians, emperors who sank to such depths of perversion that people still talk about it more than 2000 years later. Who do we have in the US? Hamilton Fish?

I was thinking of this as I read Mason Locke Weems’ 1808 The Life of Washington with Curious Anecdotes Equally Honorable to Himself and Exemplary to his Young Countrymen. According to Paul Gutjahr’s entertaining anthology Popular American Literature of the 19th Century, Weems was an Episcopal priest who spent most of his time not in the pulpit but in the publishing industry. He also wrote, turning out works of moderate literary merit and, in the case of Life of Washington, highly dubious historical content. In this election season Americans saw daily fireworks of rhetoric in the form of 30-second ads and YouTube sound bytes; Weems’ adoring biography of Washington was written for an audience with a vastly longer attention span (perhaps a product of having few other sources of entertainment; Gutjahr’s volume also contains an extremely entertaining religious tract which excoriates the profligacy of buying a novel every month). But as I read it I saw more and more common points between this naively positive account of Washington’s life and the media on our current political candidates.

Washington died in 1799 and Weems wrote the first edition of The Life in 1800—little wonder, then, that the book reads like the biography of a saint. But Weems makes an interesting choice; he focuses his narrative tightly on Washington’s personal life, beginning with a long, purple section studded with classical allusions where he argues that the reader surely already knows the public Washington, “Washington the HERO, and the Demigod…Washington the sun beam in council, or the storm in war.” I urge you to find and read this introductory section even if you have no interest in Washington or Weems or American history; in it you see a 19th century writer strutting entirely without concern for style or consistency or anything other than total balls-to-the-wall hyperbole. Weems’ argument is that by painting Washington as “the Jupiter Conservator” other biographers have served him poorly. Any man given the helm of a nation will “play his part pretty handsomely,” Weems tells us. It is in private life where true character comes out. Biographers affront Washington by ignoring his simpler virtues (like neat penmanship):

These old-fashioned commodities are generally thrown into the back ground of the picture, and treated, as the grandees at the London and Paris routs, treat their good old aunts and grandmothers, huddling them together in the back rooms, there to wheeze and cough by themselves, and not depress the fine laudanum-raised spirits of the young sparklers.

See what I mean? One thinks of leather-gloved W. clearing brush in Crawford, or perhaps of Joey Biden reading the newspaper on the train to DC, or in a more satirical spirit of Mitt Romney frugally lashing his dog to the roof of the family car.

Weems turns next to Washington’s youth. Here’s an interesting fact: Washington’s father, Augustin, was a widower when he married Washington’s mother. Weems again: “It would appear that our Hero’s father must have possessed either a very pleasing person, or highly polished manners, or perhaps both; for, from what I can learn, he was at that time at least 40 years old! while she, on the other hand, was […] in the full bloom and freshness of love-inspiring sixteen.” So we have a second marriage between a rich old man, named after Augustus, and a beautiful young woman, but Weems will brook no squeamishness: “Those over delicate ones, who are ready to faint at thought of a second marriage, might do well to remember that the greatest man who ever lived was the son of this second marriage!” Augustin Washington didn’t run away to Kenya, and Mary Ball Washington wasn’t an agnostic anthropologist, but little George managed a messianic transformation nonetheless. Note that John McCain and Biden are both on their second marriages, and that Sarah Palin has “a very pleasing person.”

With Washington’s origin established Weems is free to elaborate (I won’t say invent) a childhood for George. He kicks things off with a description of Washington’s first exposure to education, in a one-room Virginia schoolhouse, an “old field school” presided over by a gravedigger named Hobby (one of Augustin’s tenants). Weems describes Hobby as a pleasant but only moderately intelligent man who enjoyed the occasional drink and, later in life, indulged in boastful recollections of Washington’s youth. We Americans like our presidents smart but not too educated (in fact, maybe not too smart either), and Weems makes sure to paint Washington as a man who learned from his esteemed father and from church more than from the gowned dons of some university (of course Washington is one of the few founding fathers who didn’t go to school “near Boston”).

Weems tells a number of more or less saccharine stories of Washington’s relationship with his father, a man who seems like a cross between Saint Francis and Obi-Wan Kenobi. I detect the faint brushstrokes of wholesale invention in Weems’ story of father Washington planting cabbage seeds in order to spell GEORGE WASHINGTON on a plot of earth. Young George comes running to his father in excitement and perplexity, then correctly deduces that his dad planted the seeds but it was God Almighty who made them grow (a cursory web search reveals that George Washington wasn’t terribly religious). I wonder if our current George has seen his name written in any of the thorns he clears so assiduously from his ranch. Washington’s dad similarly teaches him a lesson about sharing by making him divide up an apple then taking him to an orchard. It’s like something from Breakfast of Champions if it had been written by Kirk Cameron instead of Kurt Vonnegut. Think also of Obama’s Dreams from my Father, Biden’s ground-hugging dad, and maybe even of the imaginary Oedipal conflict of Oliver Stone’s recent film.

American readers know what this is all leading up to: the cherry tree. Mason Locke Weems invented this story, now widely believed to be false. The young Washington (six, according to Weems) had received a hatchet as a present, and like all young people entrusted with sharp objects or firearms went around using it as much as possible. In Weems’ original story Washington actually wounds the cherry tree, giving it a pretty thorough chopping but not actually cutting it down: “he barked [it] so terribly that I don’t believe the tree ever got the better of it.” His father asks who did it, and Washington confesses. His father is overjoyed and praises his son. Weems also has Augustin Washington explain to George that parents should not punish their children too readily lest the children turn to lies in order to avoid beatings. Congratulations, Mr. and Mrs. Levi Johnston!

Now, of course, Obama has ascended to the nation’s highest office, and the media spotlight has dilated on two of the more bizarre fruits of the long, enervating campaign. One is Obama’s cute, soon-to-be-legendary promise of a puppy to his daughters. The other is the catalogue of iniquities that slimy Fox newsman Carl Cameron has attributed to Sarah Palin, the most interesting of which is the accusation that she ran wild with the GOP’s credit cards at Neiman Marcus. Obama has stepped into the shoes of wise old Augustin, rewarding his children's good behavior with sober responsibility of a new pet. But Palin? Should her response have been “I cannot tell a lie, I did it with my little Amex?”