It’s bizarre that Oliver Stone has been applauded for his supposedly even-handed biopic of George W. Bush, mainly because W. is so bland. 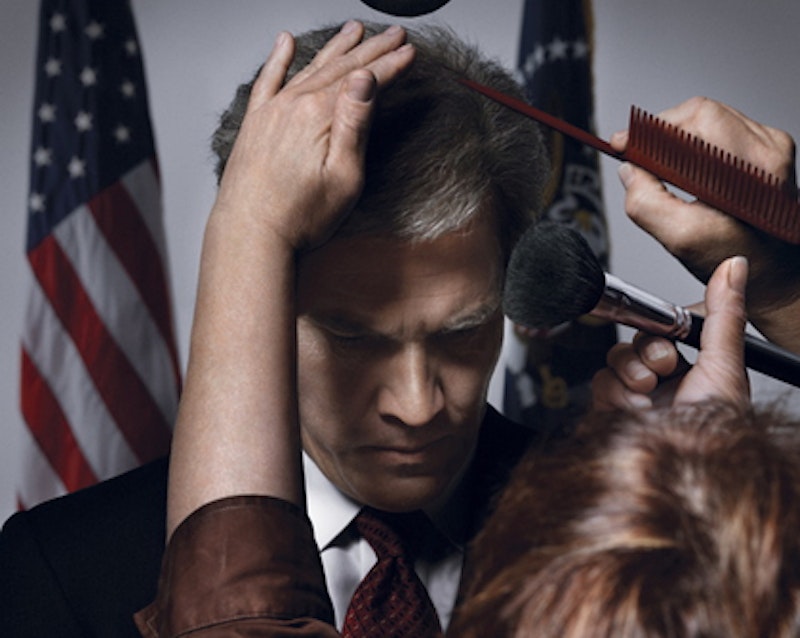 As if there wasn’t enough political flotsam surrounding this election, Oliver Stone’s W. recently washed up on the pop-political shore. A cultural event by marketing standards only, W. manages the unthinkable: it’s a film about a controversial sitting president, directed by a known cinematic provocateur, and yet contains no surprises or even borderline confrontational moments or ideas. It’s a fun little lark—and surprisingly quick for its 130-minute running time—but adds nothing to our collective understanding of the 43rd president except a sprinkling of Psychology 101 paternal resentment and some leaden impressions of famous faces that play like Saturday Night Live without the jokes. Stone has claimed in interviews that he rushed his film to completion in order to release it by the election, but I’d be surprised if it’s still in wide release by Nov. 4.

While his immodesty makes W. seem more electorally contentious or revealing than it is, Stone neglected to mention that it’s perfectly timed for Halloween. The acting (as it were) in W. amounts to little more than stunt casting, a fun game wherein performers are chosen purely by physical similarity to members of Bush’s first administration. Since Stanley Weiser’s script reads like a “Greatest Hits” collection of Dubya-related phrases and news headlines, with no character development in sight, Stone gives us little option but to judge his actors based on crude mimetic ability. By that measure, Thandie Newton’s Condoleezza Rice is the most physically and vocally impressive, with no real close second. The usually dependable Scott Glenn isn’t nearly square-jawed and flinty-eyed enough to pass as Donald Rumsfeld. Likewise, Geoffrey Wright exudes none of Colin Powell’s soldierly gravitas. Noted Democrat Richard Dreyfuss has a good time assuming Dick Cheney’s big-bellied slump, but he’s almost too likable (too Dreyfuss-y, really) to capture Angler’s Burgess Meredith snarl and general contempt for those around him. Perhaps most disappointingly, British actor Toby Jones doesn’t even come close to Karl Rove; he has actual lines in his face, for one, rather than the Turd Blossom’s waxed creampuff, evil pre-pubescent look.

Then of course, there’s Josh Brolin as the upwardly mobile continual failure who eventually ascends to White House residency. Brolin’s obviously game for the role, which again mostly requires him to repeat incidents and notable neologisms (“I’m the decider,” his near-death by pretzel, “misunderestimate”) and occasionally squint into the distance in a recurring baseball stadium-set dream sequence. The actors around Brolin—Dreyfuss, Jones, Newton, and especially James Cromwell as George H.W. Bush—play their roles pretty stiffly, allowing the makeup and hair teams to pick up the imitative slack. But Brolin (whose Bush impression doesn’t even reach Will Ferrell levels of caricature or accuracy), with Stone’s help, plays Bush like a cowboy moron. It’s a testimony to either film critics’ collective liberalism or Bush’s unbelievable ineptitude (probably both) that Brolin and Stone’s depiction has been hailed for its alleged sympathy: “Against considerable odds,” writes The Los Angeles Times’ Kenneth Turan, “his George Walker Bush is a sympathetic likeness of an apparently sincere individual.” Manohla Dargis of The New York Times claims somehow that Stone “goes easier on Mr. Bush on screen than some of his off-screen remarks suggest.”

Maybe they were able to look past the over-the-top musical cues and symbolism, like the Robin Hood theme that plays while the cabinet discusses Iraq and then gets lost on a walk on Bush’s Crawford ranch. (The director of JFK, The Doors, Platoon, and Nixon also shows his worldview to have barely evolved past the 1960s by playing Norman Greenbaum’s “Spirit in the Sky” during anti-Iraq protest sequences.) Perhaps Dargis and Turan both left for popcorn during the scene when Brolin talks to his wife (Elizabeth Banks) while perched on the toilet, bathroom door wide-open, asking of John Quincy Adams’ presidency, “Wasn’t that like 300 years ago?” while wiping himself. Or during Stone’s third-act send-up of Fox News with a fictional show call Spinball where admirers talk about Bush’s sex appeal with regards to female voters. Maybe they were taking notes during the many close-up shots of him talking with a mouthful of hamburger, pretzels, or bologna sandwich (eaten during the lunch when he signs off on “enhanced interrogation” techniques by saying that he endured similar treatment during his 1960s frat hazing).

Such bodily intimacy might in fact make Stone’s W. a more human figure if it were complemented by any real emotional or intellectual insight, but his directorial style isn’t suited to such depictions. It’s been said that Stone paints with a wide brush, which isn’t entirely accurate; his method is more like dropping paint cans from a helicopter like cluster bombs. The result is a mixture of Dr. Phil soul-searching (to his minister: “People say I was born with a silver spoon in my mouth, but they don’t know the burden it brings”; to his father: “Why can’t you be happy for me instead of sad for Jeb?”) and constant narrative holes. Bush starts his post-college years by proposing to his girlfriend in a honky-tonk, and the two celebrate by dancing on the bar. Then the girl’s never seen or heard from again, and W. meets his wife-to-be at a subsequent barbecue. We later see that Bush went from a losing congressional campaign to owning the Texas Rangers, but Stone never shows how that happened.

Stone and Weiser come closest to actually understanding Bush’s character in the short scenes surrounding his eventual turn to born-again Christianity, an outcome of his quitting alcohol. But even here, it’s never clear why Bush found such solace in those beliefs or even why, besides a particularly bad hangover, he quit drinking to begin with. By all nonfiction accounts, it was his wife who led him out of the alcoholic darkness, yet Banks’ Laura just stands by her man, occasionally breaking into a concerned grimace.

Essentially, Stone tries for satire but doesn’t have the directorial subtlety to pull it off. W. is an aesthetic and narrative muddle, a mixture of Primary Colors and Stone’s own bloated, ridiculous Natural Born Killers. It’s entertaining to a point, but never accounts for its own existence. With no insights into Bush’s character or mind, no additions to the man’s faux-heroic rise from pampered bourbon-soaked ignominy, and not even a particularly accurate stylistic rendering of our political process, why exactly does W. exist? Surely not to rescue its namesake from widespread societal disgust, otherwise Stone could have made him more fully human or sympathetic—or better yet, indicted the electorate for allowing the sham it now decries. And W. surely wasn’t meant to satisfy the angry liberal mob (of which Stone is publicly, proudly a member), otherwise he could have sharpened his satire and really taken the guy to task by including his second-term disasters like Hurricane Katrina and the Justice Department debacle.

Rather, Stone has given us an animated round-up of first-term Bushisms at a time when, after four additional years of this administration’s frightening incompetence, mere malapropisms like “Is our children learning?” seem positively quaint. Stone could have either humanized the man or hung him high, but instead chose to simply remind us of a pathetic national mistake right as we’re trying to turn the page.