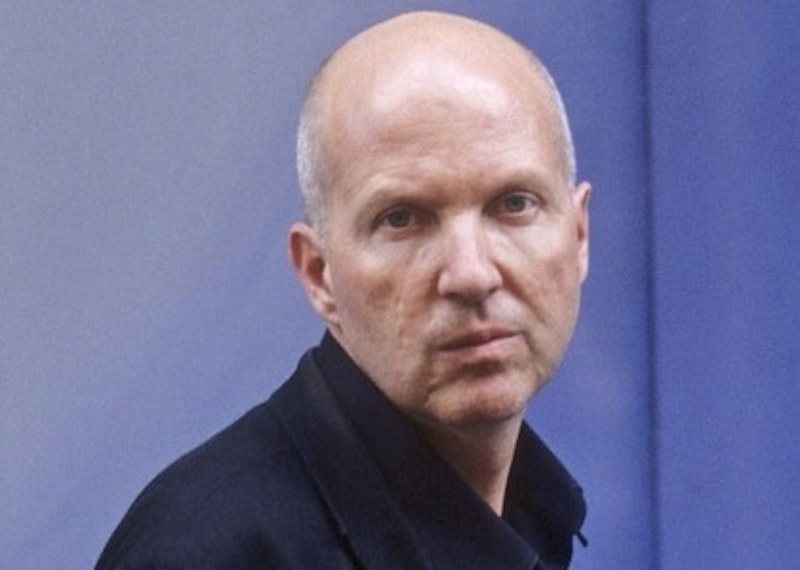 Just as in America, a murkily defined trend towards literary “minimalism” took root in 1980s French literature. The American version—exemplified by the working-class short stories of Raymond Carver or Tobias Wolff—transplanted Hemingway’s terse, tense phrasing to the economic fringes of our culture, creating a standard of literary realism that persists in M.F.A. programs and book review sections to this day. The French version, if the early work of Belgian novelist Jean-Philippe Toussaint is any indication, used minimalism to very different ends. Toussaint’s first three novels (The Bathroom [1985], Monsieur [1986], and Camera [1988]) have all been reissued this year by the Dalkey Archive Press, the latter forthcoming on November 17 for the first time in English. These strange books show a writer of more purely aesthetic motivations and wryly comedic intentions than his American counterparts. Think of Toussaint as a deadpan slapstick comedian, or maybe a mundane surrealist. Whatever the classification, his slim novellas are works of sustained vision and surprising depth even as they occasionally test one’s patience.

All three of these books concern unnamed white male protagonists who float through life with a bemused detachment from outside events and relationships. They are educated but unambitious, vaguely curious about life’s big questions but seemingly uninterested in smaller intimacies—the eponymous narrator of Monsieur, for instance, barely winks when his fiancée ends their relationship, and even then he keeps living with her family. Like that character, the narrators of The Bathroom and Camera “display… in all things a listless drive,” and Toussaint’s prose follows suit; his books have brisk plots but little action. At times, characters even seem beholden to Toussaint’s style itself, unable to properly express themselves before the narrative skips on to the next conversation or scene. During a party in Monsieur, a paragraph ends with a character, Kaltz, talking to a government official:

There’s a lifetime of uncatalogued decisions and remorse in the simple reiteration of Michelangelo Antonioni’s name—an adult’s sudden view of the small sacrifices he’s made to ensure professional stability—that Toussaint nevertheless leaves unsaid. The moment simply continues, carried along by his narrative style and passing quickly over would-be emotional revelations that American-style realism would likely examine in depth.

Toussaint occasionally leaves philosophical breadcrumbs for readers to follow, but they never quite lead us to concrete meanings or explanations. The Bathroom, for instance, has the Pythagorean theorem for its epigraph, and its three sections—the middle of which is titled “Hypotenuse”—are made up of numbered paragraphs that you’d expect to fit the formula. But the numbers don’t work, just as the female love interest in Camera, punningly named Pascale, is a false promise of definite philosophical underpinning. Few true pensées are to be found in Toussaint’s novellas, and the ones that do arise seem either impressionistic (reflections on relativity theory, say, as in Monsieur) or explanatory of the books’ ambling structures:

For what is the act of thinking—if it’s not the act of thinking about something? It’s the flow of thought that is so beautiful, yes, the flow, and its murmur that travels beyond the world’s clamor. Let yourself attempt to stop thought, to bring its contents to light, and you’d end up with (how could I say, how could I not say rather) trying to preserve the quavering, ungraspable outlines, you’d end up with nothing, water slipping through your fingers, a few graceless drops drying out in the light.

This is the philosophical thrust of Toussaint’s early work. The books’ aloof protagonists and unadorned language recall The Stranger, but Toussaint makes his larger points stylistically where Camus made his narratively; Meursault’s actions lead him to prison where his best coping mechanism is the resigned existentialism that Camus espoused. The Bathroom, Monsieur, and Camera more closely resemble The Crying of Lot 49’s shaggy, ultimately directionless structure, but without Pynchon’s mock-epic ambitions and paranoia. Rather, Toussaint’s everymen are trapped in their author’s own purposeful form. Their desire to fully catalogue a day’s action, to bring a day’s contents to light, turns out to be as ineffectual as their own professional and personal lives. The books’ plots are likewise about everything and nothing all at once; so much happens, yet so little is of actual consequence. Here’s The Bathroom’s narrator describing a Polish man’s attempts to filet an octopus:

Leaning over sideways, white shirt under grey suspenders, Kabrowinski attempted to slip the tip of a knife into the sticky flesh of an octopus tentacle stretched out on the wooden chopping board. Facing him, Kovalskazinski John-Maria (who arrived, very elegantly dressed, shortly after Edmondsson’s departure) held the mollusk between his delicate hands to keep it from slipping… A dishtowel wrapped around his waist, he stood very straight, head held stiffly, lips pinched together.

This cavalcade of physical detail—beyond anticipating the “water slipping through your fingers” metaphor in Camera—eventually gives way to more terse descriptions; “The next morning I woke early, spent a quiet day,” reads a later paragraph. The narrator discovers, like the statesmen discussing film, that his own narrative has proved ungraspable. Sit still for a minute to appreciate life’s tinier visual details, and time has already marched on without you. This is the message in Toussaint’s medium, and the encompassing theme that makes his strange informal trilogy so bizarrely engrossing.