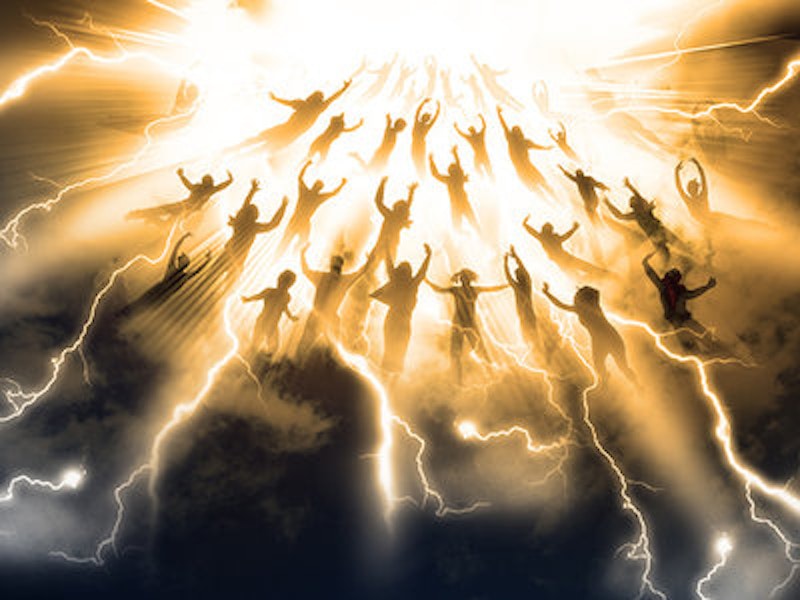 I was getting my tires replaced and had an hour to kill. I sauntered down Pico Boulevard near La Cienega and found a dreary little coffee shop with a 1950s-style marquis. I sat at the counter and a rail-thin waiter with a goatee and a slew of tattoos poured me coffee.

“What you having,” he asked.

“Two eggs, toast and a side of tomatoes. Make ‘em scrambled.”

I was the only customer, convenient for the waiter since he was also the cook. As he prepared my breakfast, I dove into the book I was reading, Feet of Clay by Anthony Storr. I was halfway through a chapter about Bhagwan Rajneesh, the spiritual conman with a love for Rolls-Royces and Rolexes.

The waiter returned.  My plate was bursting with food, way too much for one person.

“They’re big eggs,” he smiled. “What you reading?”

“It’s about gurus and false prophets,” I told him.

“Ah yes,” he said. “They come in sheep’s clothing but inwardly they are ferocious wolves. Matthew 7:15.”

I smiled and perused his arm tattoos. His left bicep portrayed Jesus with the Biblical reference John 3:16. His right bicep showed Saint George atop a horse slaying a dragon.  Below this were the words “Saved by Grace.”

“You a believer,” he asked.

“I believe in God if that’s what you mean.”

“Well I just bought a 12-pack of water at Costco if that means anything.”

He didn’t laugh. I girded myself. Every few years I came across a self-appointed zealot who took it upon himself to educate me about Armageddon. In my 20s, this was annoying. In my 30s, it was fascinating. These days it’s jarring.

He sat on a stool behind the counter and began speaking. “The great day of wrath is coming. Terrorism, overpopulation, earthquake, drought. Old diseases once wiped out will return like polio and small pox. Newspaper headlines threaten the end of the world. Drugs become legal. Prostitution is everywhere.”

I took a bite of my breakfast. Nothing like eggs with a side of paranoia.

“You don’t have to be a genius to see the signs. But you need wisdom to listen. God gives us warnings. These things must happen before He can return. There will be war, pestilence, famine. The Holy Roman Empire will be resurrected. This has already happened with the European Union.”

I felt odd chewing while he was spewing, but I was hungry. It hit me why the breakfast portion was so large. He wanted a captive audience and it would take me at least 20 minutes to down my food. This also explained why the restaurant was empty. No one wants apocalyptic pancakes.

“Right now there are bulldozers beneath the holy temple in Jerusalem. The politicians say it’s an archaeological dig, but don’t believe it. They want to rebuild the third Jewish temple. Once this happens, prophecy tells us the last days are upon us and blood will flow through the streets.”

I grew tense. I’d been on a media detox of late, focusing on positive news and avoiding negative headlines. Now this stranger was telling me the world was about to turn to shit.

“The righteous will be saved but those left behind will endure a seven-year period of tribulation. During this time the Antichrist will emerge.”

I spilled coffee on my chin. The waiter handed me a napkin, continuing his diatribe without pause. I lifted my hand, urging him to slow down. “Can I ask a question,” I said.  “Who exactly is the Antichrist?”

“Lucifer. He’ll appear before the return of Jesus and many people will be fooled into thinking he’s the messiah. He’ll demonstrate false signs, wonders and miracles. Evil angels are already among us preparing the way for his arrival.”

“Is the Antichrist an actual person?”

“How are we supposed to recognize him?”

“According to the Book of Daniel Chapter Seven, he has several clear traits. He comes from a small country in Western Europe. He’ll speak for the church and claim to be able to forgive sins. Someone will attempt to kill him by shooting him in the temple but he’ll survive. People will call this a miracle. He’ll then claim that he is God and will broker a seven-year peace treaty between Israel and the surrounding Muslim nations. In exchange, he will demand that a statue of himself be placed in the rebuilt Holy Temple.”

“And the rapture happens before this?”

“Yes. Those who are saved will be carried away to Heaven and spared.”

“Some will come to faith in Christ during this time. They’ll be martyred and killed for their belief.”

“How exactly does the rapture occur?”

“The Bible says believers will be ‘caught up in the clouds to meet the Lord in the air.’ Our bodies are mortal and not capable of being in the Lord’s presence. We’ll be given new bodies patterned after the body of Christ. After Christ defeats Satan, we’ll return to earth to live with the Lord in peace.”

He rubbed his hands together and locked eyes with me. He was finished.

“That’s why I asked if you were ready.”

I’d eaten my entire breakfast as if I’d been chewing popcorn at a movie. The waiter took my plate and disappeared into the kitchen. I exhaled, overwhelmed. The door to the coffee shop opened and a man in his 40s entered. He wore jeans and a Bob Marley t-shirt. He approached the counter and reached for a menu. After a minute or so, he turned towards me.

“Terrifying,” I told him.

I left a 20-spot on the counter and went on with my day.