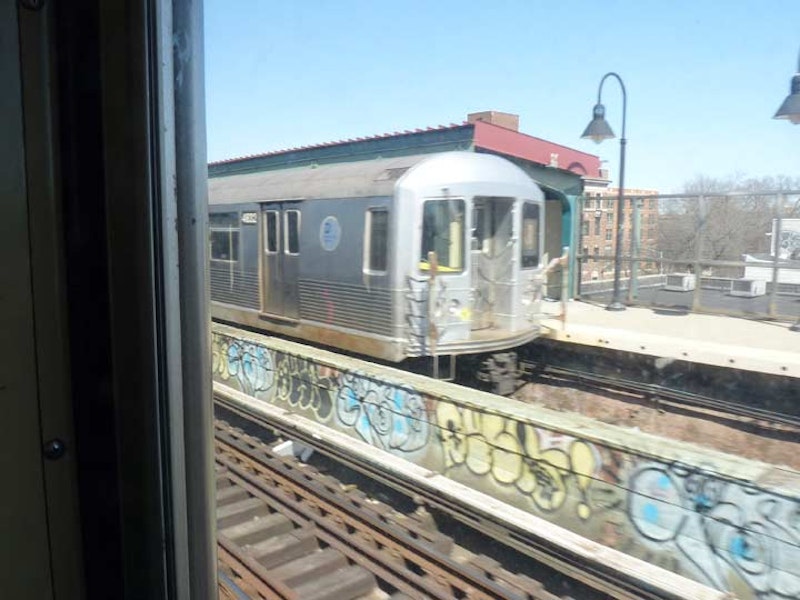 On a recent sunny Saturday between April snowstorms, the best kind of day for photography, I took the J train out to Woodhaven and then walked the six miles or so back to Kew Gardens, where the E train goes back to Woodside to the Long Island Railroad. I always enjoy my J train jaunts, since I don’t invade the precincts it serves that often, but also because the J train, more than other lines, is a roiling Transit Museum with not only new R-160 passenger cars, but also ancient corrugated R-32 cars, introduced in 1964 and still in service on the C, J and occasionally A; and also the last R-42 units, introduced about 1970, in regular service. A new shipment of passenger cars is due in the next few years, so the J will soon lose its unique properties. 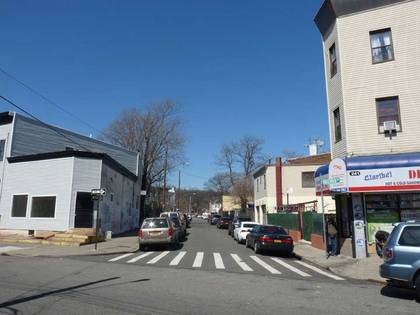 Force Tube Ave., seen here from Ridgewood Avenue, upsets Highland Park’s overall street grid, running between Jamaica Ave. and Highland Pl. southeast to Fulton and Logan Sts. The street’s been mapped since the late-1800s, and old-time residents mention that it was formerly a dirt road without sidewalks.

The name refers to high-pressure tubes, or conduits, that ran under the street, connecting Ridgewood Reservoir, just north of Highland Park, to a large pumping station that stood until the mid-1960s at Atlantic Ave. and Conduit Blvd. It was part of a water system connecting Freeport in Nassau County where the Milburn Pond was tapped in the 1890s to supply water to the then-city of Brooklyn. A water conduit through southern Nassau and Queens was constructed along streets that came to be known as Conduit Ave. and Boulevard. Aqueduct Racetrack, which sat near the conduit, was also named for it.

The pumping stations, conduits and reservoir all went out of use around 1970. The Romanesque Brooklyn Water Works building in Freeport, visible to generations of LIRR commuters, was damaged in a fire in the early-1990s before it could be converted to residential use, and was then demolished. The Ridgewood Reservoir remains, awaiting revival. 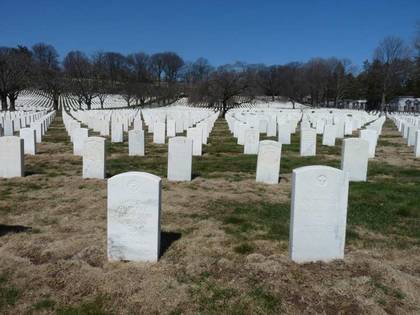 There are 17 cemeteries in Cypress Hills on either side of the Brooklyn-Queens border. It’s a hilly area, where thousands of years ago a glacier was stopped cold, depositing debris in its advance, accounting for the hills of Staten Island and the middle of Brooklyn, Queens and on into Long Island. One of them is National Cemetery at Jamaica Ave. and Hale St., where every one of its over 21,000 stones bears the cross that appears on the gravestone of a military veteran.

The National Cemetery network was established during the Civil War. On July 17, 1862, Congress enacted legislation that authorized the President to purchase "cemetery grounds" to be used as national cemeteries "for soldiers who shall have died in the service of the country." The cemeteries soon did a good business. In that first year, a National Cemetery established in Sharpsburg, Maryland became the final resting place for 4, 476 Union soldiers killed at the Battle of Antietam, September 17, 1862, the bloodiest day in US history. Today the National Cemetery network consists of 136 cemeteries, 120 administered by the US Department of Veterans Affairs. 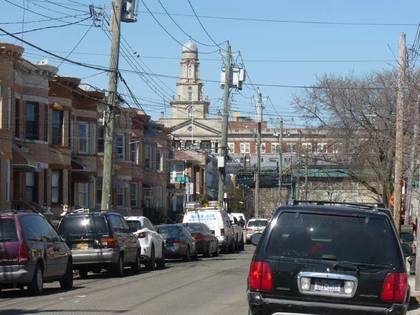 The former Franklin K. Lane High School’s tower looms over the undefended border of Brooklyn and Queens, which runs down the center of Eldert La. When built in 1923 and named for the Secretary of the Interior under President Woodrow Wilson, it was one of the largest high schools in the world. Over the decades it gained notoriety as one of the city’s toughest. After the graduating class of 2012 it was split into five separate schools: The Academy of Innovative Technology, The Brooklyn Lab School, Cypress Hill Prep Academy, The Urban Assembly School for Collaborative Healthcare, and Multicultural High School. 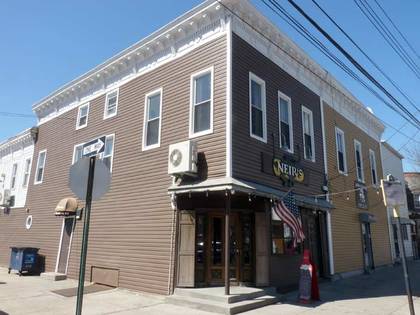 At the corner of 78th St. and 88th Ave. (formerly Snedeker, Snediker, or Sneideicker Ave., depending on what map you consult, and 3rd Ave., stands one of New York City’s oldest taverns, Neir’s, opened in 1855 (or 1829, depending on what account you read; the tavern itself says 1829) as The Pump Room, or Old Blue Pump House, to serve Union Course patrons—a race course was once located directly across the street.

Though Neir’s is one of the oldest drinking establishments in the city it gets little notice or press outside of Queens. The founder was Cadwallader Colden, and that name might raise a scintilla of recognition for New York State history scholars: his great-grandfather, who had the same name, was acting governor of NY State and mayor of NYC in the colonial era. The Neir name comes from Louis Neir, who purchased the place in 1898, adding a bowling alley, ballroom, and rooms for rent upstairs.

Mae West’s (1893-1980) name is attached to a number of institutions in Brooklyn, notably the Astral Apartments and Teddy’s in Greenpoint and North Williamsburg, and she’s said to begun her showbiz career singing here; a plaque marks her former home on 88th St. At times, the ghost of Mae can still be seen here. Her association with Neir’s, currently owned and operated by firefighter Loycent Gordon, has been disputed, however. What is indisputable is that several scenes of Martin Scorsese’s mob epic Goodfellas were filmed here. 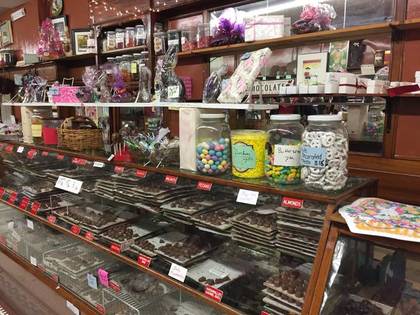 A visit to Schmidt’s Candy, 94-15 Jamaica Ave. east of Woodhaven Bldv., is a bracing reminder of American capitalism and small-town pride. Schmidt’s has been producing “homemade” sweets in Woodhaven since 1925, using the same German recipes its founder employed, and the shop remains in the same family and is run by his granddaughter. Today, Schmidt’s features an up-to-date website, where treats like boxed assortments, assorted jellies (raspberry is a favorite), caramels, graham crackers, “turtles” made with chocolate, caramel, and nuts, and many other varieties are described and can be obtained from Tuesdays through Saturdays. 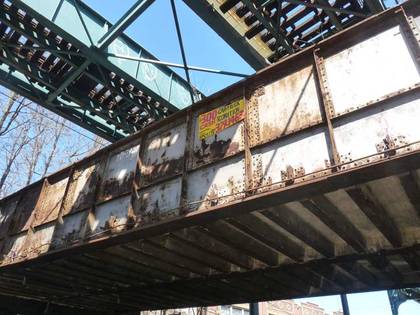 Though older paper maps accurately show the elevated train over Jamaica Ave., they fail to depict this trestle which crosses under it just east of 98th St. That’s because the railroad that once used it hasn’t run since 1962, and maps are not in the business of showing architectural quirks—their purpose is to show vehicular routes, and even then fell short, since a very important aspect was ignored—one-way streets, a feature that modern online versions are able to show.

The so-called Rockaway branch of the LIRR once split off from the main line a couple of miles north in Rego Park and crossed Jamaica Bay to the peninsula, but LIRR service across Jamaica Bay ended in 1950 after a fire. The railroad continued to run the line to Ozone Park until 1962. While the Transit Authority (today’s MTA) purchased the stretch over Jamaica Bay and converted it to run the A train beginning in 1956, the section of the line in Rego Park, Forest Park and Woodhaven has been left to rust, ruin and weeds. There are plans bandied about to make the old line into a linear park a la the High Line in Manhattan, or even reactivate it and rebuild tracks for subway extensions, but both options would cost billions, and the money is needed elsewhere. 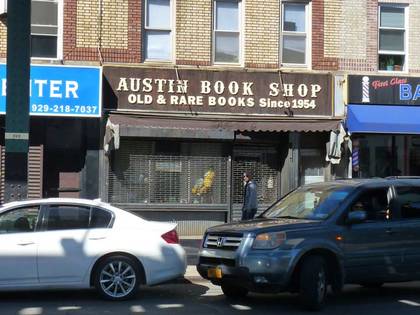 104-29 Jamaica Ave. is a long way from Austin St., which is in Rego Park and Forest Hills, but there’s a reason for the name of the shop. In 1954, Bernard Titowsky opened a used bookshop in the heart of Kew Gardens, 82-60 Austin St., and moved around the corner 16 years later, over the years culling a devoted following even though it was only open on weekends, depending on mail order for much of its business.

Titowsky lost his lease in Kew Gardens in 1984, but undauntedly moved here to Richmond Hill. After his death in 1993, the store’s been run by its next owner, Raymond Harley, who continued Austin Bookshop’s mecca status for used books on baseball that Titowsky cultivated. 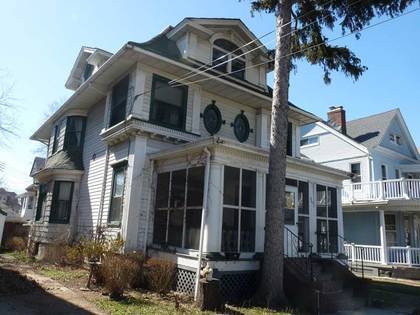 New York City has had three settlements named Richmond Hill. The one in Manhattan, in what is now the West Village, and the one in Staten Island, in what is now Richmondtown, have pretty much been absorbed into new neighborhoods. Queens’ Richmond Hill has been more enduring. In 1869, developers Albon Platt Man and Edward Richmond laid out a new community just west of Jamaica with a post office and railroad station, and Richmond named the area for himself (or, perhaps, a London suburb, Richmond-On-Thames, a favorite royal stomping ground). It became a self-contained community of Queen Anne architecture west of Van Wyck Boulevard (now Expressway) that remains fairly intact to the present day. Journalist/activist Jacob Riis as well as the Marx Brothers were Richmond Hill residents in the early-20th Century.

This photo is typical of the quirky, rambling houses found in the neighborhood. Bear in mind, too, that no sections of Richmond Hill have received Landmarks Preservation Commission protection, and so all its buildings are potentially at the mercy of rapacious developers. 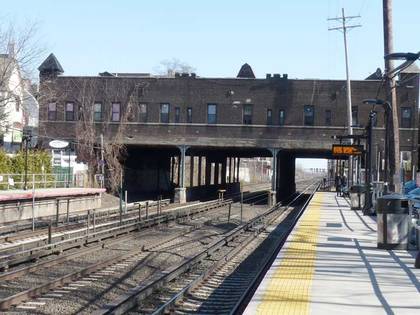 A complicated engineering solution encompasses three separate bridges on Lefferts Ave. crossing the LIRR’s main branch: one for the roadway, and two on each side that support the buildings. According to Kew Gardens: Urban Village in the Big City author and PBS-TV host Barry Lewis, the store’s bridges actually run through the buildings’ roofs, with the storefronts hung from the bridges like a curtain on a rod. The engineering principle is similar to that of the circa-1565 Ponte Vecchio (Old Bridge) in Florence, Italy. The Lefferts Blvd. bridge had assumed its present condition by 1930. 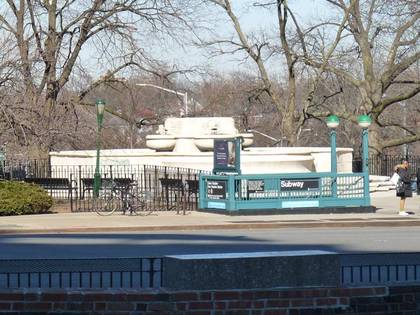 The dreams of a girl and boy—

Into an isle of joy!

What could Rogers and Hart have been going on about in this phrase from “We’ll Take Manhattan”?

“Civic Virtue” is probably the most over-the-top classically-themed public sculpture in New York City; only the Bailey Fountain in Grand Army Plaza, Brooklyn comes close in ebullience. “Civic Virtue” consists of a massive statue depicting a nude muscular youth (depicting virtue) with a club slung over his right shoulder. At his feet writhe two nude mermaids (depicting vice). When Frederick MacMonnies created it from a single block of marble in 1919 and it was placed in Manhattan’s City Hall Park, it engendered no end of a hue and cry from offended feminists, prudes, and heavy hitters such as Charles Norton, President of Harvard University. Such a sensual depiction would not stand! Not in virtuous Manhattan. Eventually, in 1941, it was packed up, mermaids and all, and shipped to the Queens’ Borough Hall Plaza, where, presumably, right-thinking people wouldn’t see it.

By 2012, more “right-thinking” people such as then-Borough President Helen Marshall and then- Rep. Anthony Weiner were again up in arms about the scandalous sculpture, and “Fat Boy” and his sea sirens were on the move again—the marble was cleaned and the work was plopped into the center of Green-Wood Cemetery, where only the dead and their visitors could work up righteous and virtuous anger about him.