The 300-Year-Old Street That Doesn’t Exist 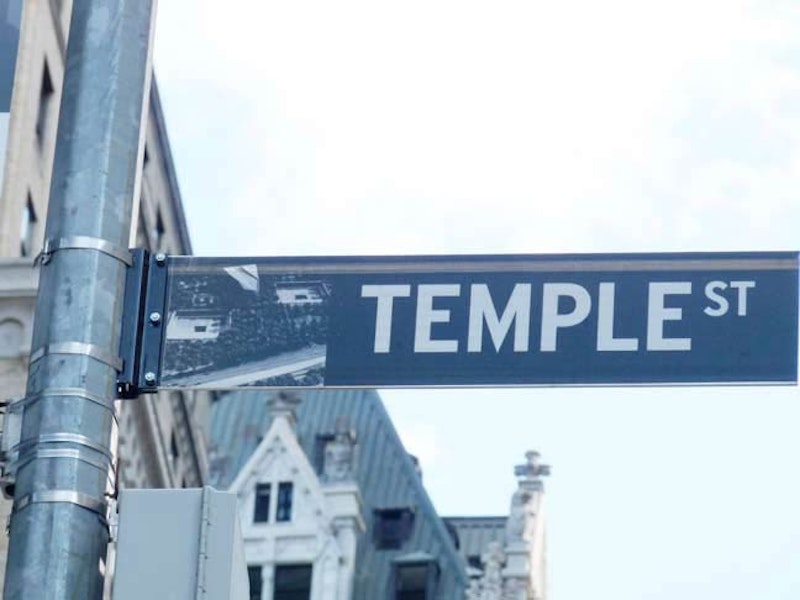 While passing through the Financial District seeking out locations to feature on Forgotten NY over the past 15 years, I'd always noticed a green and white street sign saying “Temple Street” attached to a lamppost on Liberty Street between Broadway and Trinity Place/Church Street. I duly listed it on my downtown Manhattan alleys list as a lost street that the Department of Transportation marks anyway, but never thought about it much. The green and white sign had come down in the aftermath of the 9/11 attacks, which occurred across Church Street.

However, the Downtown Alliance has since replaced the old green and white sign with one of their stylized black and white signs, complete with an image of the new WTC Memorial. I thought this would be a good time to do a little bit more on the street, though I don’t know why it continues to be marked. 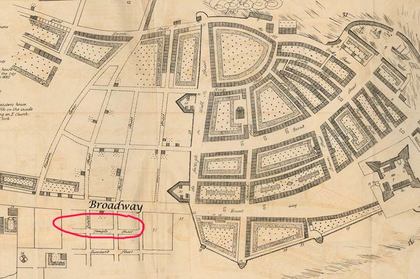 Evidenced by this map of what became the Financial District in 1695, Temple Street has been called this for quite a long time. On the map, you can see it in the same space it occupied for the next three centuries, just below the large “Broadway” identifier I placed there. I had thought that “Temple” referred to Trinity Church, but the first Trinity was chartered in 1696 and the original building constructed in 1698. Note that Temple street runs for two blocks.

On the map, Fort Amsterdam can be seen in the lower right. The U.S. Customs House, now Museum of the American Indian (1900), occupies this site. The fortifications on the north side of Wall Street also show up clearly. 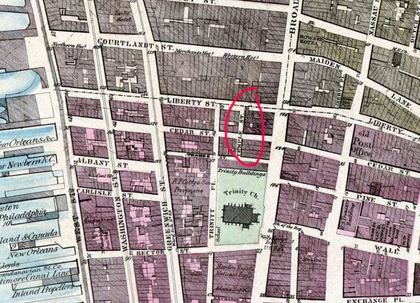 This is a portion of a Dripps atlas from 1867. Here we see Temple Street running for two blocks from Thames Street north to Liberty Street west of Broadway. Trinity Church and its cemetery are prominent. Also note that Church Street does not yet exist; it was created running north from Liberty Street and Trinity Place within the next two decades. 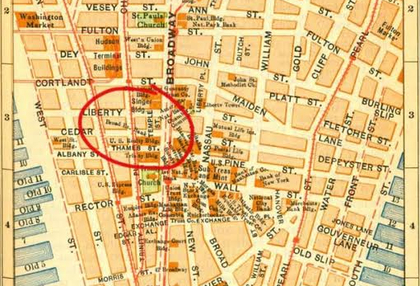 By 1916, Temple Street (circled in red) runs for just one block, from Cedar north to Liberty. It had been reduced to one block in 1907, when the Trinity and U.S. Realty Buildings, both tall Gothic towers built to complement Trinity Church, were constructed on both sides of Thames Street.

In 1967, it was decided that Ernest Flagg’s 1908 Beaux Arts skyscraper Singer Tower, one of the most identifiable buildings in the Manhattan skyline, located on Liberty and Broadway, should come down. Singer, the sewing machine giant, had moved out in 1961 and U.S. Steel had purchased it in 1964. As big as the tower was, U.S. Steel found the offices and interior spaces too small and wanted a modern structure. This was before the Landmarks law had passed and pretty much anything was fair game (Pennsylvania Station was also a casualty in the same era); therefore the Singer came down… 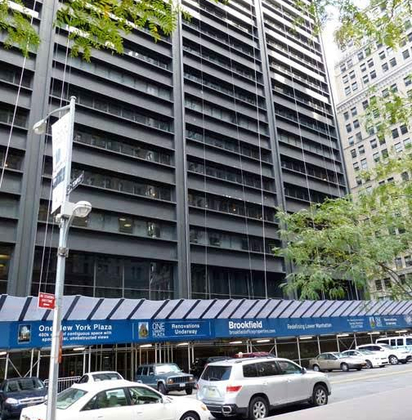 …and the forbidding U.S. Steel Building, later renamed One Liberty Plaza, was constructed in its place, opening in 1973. It presently hosts Goldman Sachs, Empire Blue Cross and Blue Shield, and many other Wall Street and insurance firms.

In 1968, when the Singer Tower came down, the small parcel across the street between Broadway, Trinity Place, Cedar Street and Liberty Street became Liberty Plaza Park, and the last piece of Temple Street was eliminated. 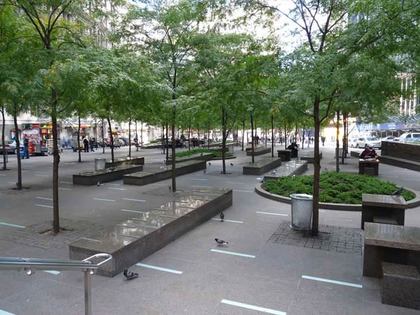 Liberty Plaza Park was affected greatly from the destruction of the World Trade Center a block away in 2001, and it was used for months thereafter as a staging area for emergency vehicles and equipment. Formerly a large, relatively shade-free concrete plaza, the park was given a rehabilitation in 2006-2007 when dozens of honey locust trees were planted and new fluorescent lighting was installed under the pavements, in an unusual arrangement.

For many years a highlight of the park was J. Seward Johnson Jr.’s “Double Check” sculpture showing a Wall Street businessman. After it was damaged on 9/11, it was later rehabbed and replaced in Zuccotti Park. Mark di Suvero’s “Joie De Vivre” tripod sculpture was installed on the southeast corner of the park in 2006. 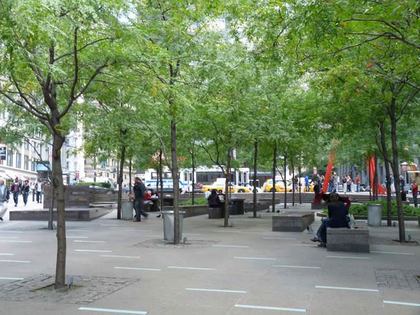 As part of the 2006 renovations the park was renamed for John Zuccotti (1937-2015) NYC Deputy Mayor in 1975 under Abraham Beame, the chairman of the Real Estate Board of New York, and of Brookfield Properties, which owns the park.

In late 2011 and early 2012, of course, Zuccotti Park was the staging area for Occupy Wall Street‘s protest against economic inequality and it became known worldwide as hundreds, if not thousands, gathered in the park for several months.

Today, a street sign is all that remains of Temple Street, which has an over 300-year legacy.