It really would’ve helped me. Or would it? 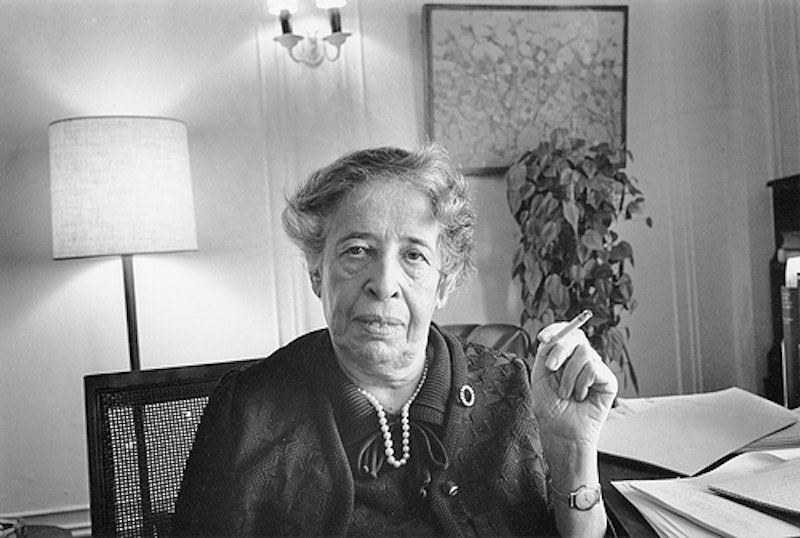 I’ve been cataloguing my regrets and think I’ve found a corker. This is a regret with a twist ending. It’s a Charlie Kaufman kind of thing where realities get turned upside down.

Like most of my regrets, this has to do with work habits and attitude. In this one the setting is senior year of high school. I read Hannah Arendt’s Anti-Semitism and write a précis of each chapter. Along the way I look up words and terms I need to know about. By the time I’m done I’ve ground into my head the basics I need for getting modern history. I’ve also learned not to fear a dense page; take it sentence by sentence and you can find out what it’s saying, or close. Now I’m ready for college.

I didn’t do any of that and I wasn’t ready for college. Yes, I passed my college classes and came out with a degree. Professors liked some of my papers. But I didn’t learn much. The knowledge landed with a whomp and slid off, as if my brain were an angled roof in a snow-heavy country. To me knowledge was a weight, a crisis, something that bore down on me. It arrived in the form of a syllabus, which contained things I had to do to prove I wasn’t stupid: read this many pages, write a paper, take tests. I’m surprised I picked up anything worth knowing, because my head wasn’t in the right game. Being a college student didn’t mean learning, it meant dodging boulders as they came bouncing my way.

I was panicked. I didn’t notice but I was, and I felt the effects. Being a college student wore my nerves down. Whereas the me who spends senior year of high school on Hannah Arendt is a me who doesn’t panic. He can feel stupid for a while and then figure out what he knows and doesn’t know. He realizes that he’s building for the future and doesn’t have to prove right now that he has a great mind. Possibly he might even see through the need to have a great mind and prefer having a trained, well-informed mind with which he can examine things that interest him. I suspect I go back and forth on that last point. Chiefly, my regret centers on not sitting down and working through a dense but brief book that would have left me with a good set of intellectual muscles.

Now here’s the twist. During my actual senior year of high school I lived through the regret I would’ve had if I’d tried the Anti-Semitism idea. During that actual year I wrote a series of papers on big men in history: Metternich, Disraeli, Harry Truman, Malcolm X. They were ordeals and I procrastinated dreadfully. The project was a sequel to the happy time I’d had sophomore year, when I’d been able to write a series of papers about European history instead of going to Social Studies. I’d learned a lot back then and enjoyed writing. Now I was revisiting my old happiness and finding it stale. This is a sequence I’ve been through a few times. Also, I think straying from great men might have done me some good in getting ready for intellectual life. Mastering concepts, as opposed to following personalities, supplies a gear you really need.

On the other hand, imagine a 17-year-old boy with unwashed Spaniel hair sitting down to the concepts of Hannah Arendt. All my life I’ve been drawn to high-prestige undertakings meant to prove that I’m a big deal of one sort or another. At the start I’m nothing, but when finished I’ll have turned the game around. Such is my reasoning and it doesn’t work out. If I’d been able to sit down to Anti-Semitism in high school, my motive would have been prestige and I would’ve flopped. Then I would’ve reflected on the simple wisdom of going with the grain and not trying to prove anything. I had enjoyed my European history and great men as a sophomore. Why not some more great men in senior year? A fine way to get an introduction to various important corners of history and politics. Imagine my tour of the parliamentary system as I pick up the threads of Disraeli’s Reform Act of 1867. And so on.

Here’s my big regret. I wish I didn’t panic.