The United States is run by vampiric bourgeois scum. 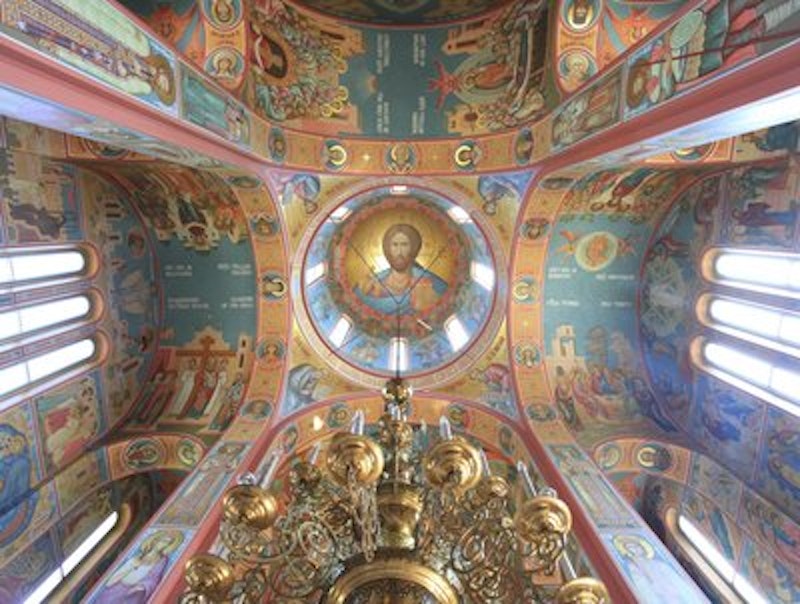 I have been asked: Why have we Anglo-Saxon paleo-conservatives, sons of the heartland American volk, converted in such large numbers to the Russian Orthodox Church? Self-consciously American as we are, why do we follow a foreign creed?

The link between American paleo-conservatism and Russian Orthodoxy is so true that I forget that it is not obvious to outsiders. So I shall explain.

First, there is the fact that the Russian Orthodox Church is among the most conservative of Christian churches. To steal a phrase from that Zionist entrepreneur William F. Buckley (a Catholic, by the way), it alone is standing athwart history yelling, “Stop!”

It is doing a fine job of it, too. Pope Francis seems to welcome the transformation of Christian Europe into a Sunni caliphate; the Church of England has become an advocacy group for transsexuals; and the churches of Western Europe are extinct. The evangelical denominations here in the United States, meanwhile, are amen sections for the warmongering jingoes in Washington. They are also vehicles for foul individualist ideology, pushing, among other filth, the so-called “Prosperity Gospel.”

But in Russian Orthodoxy the paleo-conservative—the “front porch republican”—sees a church that remains proudly Christian. This church denies moral relativism, anathematizes sodomy, and fosters the spiritual welfare of its People, first and foremost the glorious Great Russian people. We American paleo-conservatives long for an equivalent church here, an anti-cosmopolitan church that would take as its mission the spiritual health of the American Anglo-Saxon race, which is no less great than the Great Russian.

This is not the space to discuss the beauties of Russian Orthodoxy—its sacramentalism, its mysticism, its total system for living in grace—virtues that commend themselves to the American paleo-con.

But I will point out here another most attractive, and obvious, fact about Russian Orthodoxy: it is the religion of Russia. Russia has its problems, inflicted mostly by outsiders who seek to destroy her and enslave her people. But she is also a model for a truly conservative society, one administered by an aristocracy in tandem with mystical priests, and ballasted by a simple, pious peasantry. (This description of course pertains mostly to Tsarist Russia, but it is also relevant to the Russia that Mr. Putin is attempting to build, despite the meddling of the anti-Russian running dogs of Davos and Brussels.)

Any such truly conservative society, of course, must repress what Marx correctly identified as the class that brings destabilizing change to a society—the consumer capitalist middle class. The United States is run by this vampiric bourgeois scum. Russia, on the other hand, marginalizes these usurers, shysters, peddlers, bloodsuckers, and stockjobbers, recognizing that in their elimination lies the spiritual health of the People. I do not condone the murder of those, like the probable CIA/Mossad agent Boris Nemtsov, who politically represent this anti-Putin liberal trash. But neither do I mourn their passing. They are traitors to Russia’s health, and soul.

By the by, it is the paleo-conservative desire for an aristocratic/peasant society free of parasitical cosmopolitan elements that makes the Old South as attractive to us as Russia is.

No, we do not defend slavery. That was an institution that was flawed as a vehicle for creating social harmony between the Anglo-Saxon aristocrat and his little brother, the Southern Black. But even those of us whose ancestors, like mine, were forced to fight for the dictatorial tyrant Lincoln’s continental empire in the Civil War honor the gracious civilization of the Old South. This was a noble agrarian civilization, with none of the poisonous mercantile “values” of the North, the flesh of which was (and is) riddled by the maggots of high finance and globalizing capitalism.

Interested readers are directed to this essay by paleo-conservative/Orthodox convert (and skilled Slavic linguist) Daniel Larison, in which he lauds the “humane and decent civilization of the South” and discusses his proud membership in the League of the South, an admirable neo-secessionist organization of the sort that gets slandered as a “hate group” by cosmopolite elements. Writes Larison: “The defeat of the Confederacy… was a defining moment when the United States took its steps towards the abyss of the monstrous centralised state, rootless society and decadent culture that we have today.”

Hoosier and Massachusetts Yankee that I am by blood, I yet applaud his words!